Uludağ visited most by Russian tourists 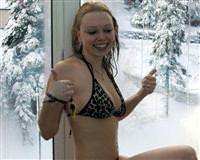 Uludağ, one of Turkey’s most popular skiing centers, is preferred most by Russian tourists in winter and by Arabs in summer.

According to information from the District Department of Culture and Tourism, the Ottoman capital of Bursa was home to a number of civilizations and with its historical remnants and thermal springs, the region boasts a serious potential for winter and summer tourism.

Up until now the city has not received the share it deserves from tourism, however with recent intensive promotional efforts, it appears the number of visitors to Bursa may now be on the rise.

While 145,000 tourists visited and stayed in Bursa last year, the goal is to bring that figure up to 500,000.
When looking at figures over recent years, Russian tourists are the number one nationality to visit Bursa. Although Russians are rarely seen visiting the city center, they enjoy skiing in Uludağ in the winter months.

In 2010, 23,000 Russian tourists visited Bursa, while last year that figure went up to 26,000. Following Russians; Arabs constituted the highest number of visitors in 2011 with 17,000 tourists arriving to Bursa. The number of Saudi Arabian visitors in 2011 was an increase by 70 percent compared to figures from the year prior. In previous years there were practically no visitors from Jordan, however last year they sent 6,300 nationals to Bursa, while 3,800 came from the UAE.

Even though Arab tourists tend to come to Uludağ for its cool weather, beautiful greenery and thermal springs, the shopping they do in the city is extremely pleasing for Bursa's shop keepers. According to the Bursa Governorship, one Arab tourist shops the equivalent to six tourists from Europe.

Although the highest number of tourists to frequent the region is from Russia, the fact that they tend to prefer the 'all-inclusive' form of accommodation makes them not the most desired by clerks in the city.

Bursa has also seen a spurt of growth in the number of national tourists to visit the region with 390,000 tourists having visited last year, up from the 365,000 from the year prior. When including the number of day trippers the total number of domestic tourists in 2011 is anticipated to come out as one million.

The average stay in Bursa by domestic and foreign visitors has increased from 1.79 to 1.81 days on average. The average capacity filled for hotels has also increased, going from 41 percent up to 43.73 percent on average.