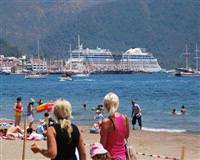 Over half of the English tourists that arrive to Turkey head to Muğla, with Marmaris being the province’s most popular destination.

English tourists prefer Marmaris as an ideal vacation destination because of the resort's combination of entertainment, accommodation and sea all intertwined within the city. Over half of the approximate 2.5 million English tourists that come to Turkey every year, spend their vacations in Muğla's popular tourism resorts Bodrum, Marmaris and Fethiye.

Turkish Travel Agencies Association (TÜRSAB) Marmaris District Executive Committee (BYK) Chairman İsmail Özbozdağ explains that Brits are especially fond of city life and lively crowds. Özbozdağ says that with its natural beauty and colorful lifestyle, Marmaris has turned into a place of passion for British tourists. "Marmaris is the sole destination in the Mediterranean that offers everything British tourists are looking for. There is no other tourist resort that has shopping centers, restaurants; bars as well as a number of hotels operated by locals all intermingled. That's why Brits love Marmaris."

Özbozdağ goes on to explain that Germans tend to prefer Antalya while Brits are drawn to the Southern Aegean.Bringing up the fact that there are certain misconceptions when it comes to British tourists, Özbozdağ says, "British tourists are generally considered to be cheap, however I can honestly say it's quite the contrary. Brits with no money are not the only English tourists to come to Marmaris. There are dozens of luxurious facilities in Marmaris and English tourists also frequent them. Brits are one of the world's richest customers. All we need to do is promote and market our value well."

Özbozdağ also points out that in addition to sea, sun, sand and fun, there is a need to point out that there are a variety of tour options available in Turkey and says that it is then that we will truly see a qualitative difference in the English tourists that come to Turkey.

Özbozdağ also says that Marmaris and its surroundings are also great destinations for other nationals beside the Brits. "Just like the British, Arabs also like lively and crowded places. They want to see things during their vacation which they don't usually see in their own countries. For example, Marmaris is surrounded by greenery as well as the sea. There is a vivacious nightlife and everywhere is lit up. The demand from the Arab market is also quite good."

South Aegean Touristic Hoteliers and Operators Union (GETOB) Director Cahit Sarıbey says that despite the economic crisis in Europe, this season the majority of tourists that visited Marmaris have been from England. Explaining that approximately 700,000 Brits vacation in Marmaris each year, Sarıbey says that they make up 65 percent of all tourists to visit the district.

Eighteen different beaches and one marina in Marmaris have won the right to wave a blue flag for their clean beaches and sea.