Istanbul: The City of Museums 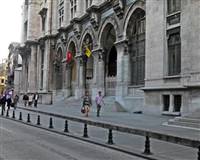 Museum-enthusiasts will be able to find a wide number of unique museums, with focuses spanning from carpets to toys and classic cars to caricatures to a variety of interesting collections in Istanbul.

Istanbul, with a history that goes back 8,500 years, has been the host of a number of civilizations in its past. It is this legacy that is well reflected in the city's famed Topkapı Palace Museum, Hagia Sophia Museum, Hagia Irene Museum and the Archeology Museums to name a few. However, the city is fast becoming a metropolis of a new era of museums that focus on an array of subjects such as carpets, caricatures, classic cars, toys, the postal service and lighting. With eight million tourists that visit a year, Istanbul's extensive selection of public and private museums for a bridge from the past to the present.

The following is a list of Museums well worth a visit in Istanbul:

-THE HISTORY OF MUSEUMS

The remnants of Turkey's first museums spans back to the thirteenth century and the Seljuks. By the 19th century, 1846 to be precise, the Tophane-i Amire Müşiri Fethi Ahmet Paşa founded Istanbul's first museum in Hagia Irene Church.

Sadrazam Ali Paşa (1815-1871) rearranged and renamed the museum ''Müze-i Hümayun-İmparatorluk Museum''. In 1869, Edward Goold, an Irishman took over the museum's administration, in 1872, a German, Dr. P.A. Dethier was brought to Turkey to move the Çinili Palace.

When Osman Hamdi Bey took over the museum's management in 1881, a whole new era began for Turkish museums. In 1884, Osman Hamdi Bey built the Istanbul Archeological Museum at the Çinili Palace and went on to establish a museum in Konya in 1902 and in Bursa in 1904.
Osman Hamdi Bey passed away in 1910and his brother Halil Ethem Bey was brought in to replace him.

Halil Ethem Bey especially contributed to developing Anatolian Museums, and during his time he set up the Turkish Islamic Arts (1914) and the Istanbul Oriental Arts Museum (1925).

The Turkish Republic's first ever Museum building was opened on May 25th, 1928 by Afghan King Amanullah Han as the Ethnography Museum.