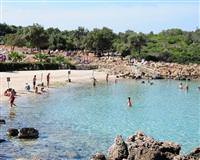 Sedir Island, famous for its sandy beaches, is fast becoming a favorite destination for Russian tourists.

Located on Muğla's Gulf of Gökova, Sedir Island, which is popularly known as Cleopatra Island is filled each of the five work days with Russian tourists. Some are visiting the Island through day boat trips departing from Akyaka and Çamköy, while other Russian tourists are coming out on tour buses from other popular destinations such as Kuşadası, İzmir, Antalya, Marmaris, Bodrum, Fethiye and Dalyan.

SEDIR ISLAND, A FAVORITE FOR RUSSIANS

Akyaka Maritime Transporters Cooperative Chairman Mehmet Gümüş states that every weekday a 50 to 200 person tour boat takes off for Sedir Island. "Tours to Sedir Island begin in May and go on until the end of October. In recent years, the Island has become a visible point of interest for Russian tourists." Gümüş went on to explain that the weekday crowds primarily consist of foreign tourists, and that Russian tourists especially tend to flock in from a number of other popular destinations to visit the Island. According to Gümüş, there are approximately 600 foreign tourists that participate in these trips daily.

The boat trip departs from Akyaka and its first stop is Sedir Island. Tourists get to enjoy the sea and sand for two hours. Gümüş explains that there are even a number of patrons that come solely to see this unique sand. In addition to Russian tourists there are a high number of Germans and the Dutch that choose to visit Sedir Island, however their weekend trips are mainly occupied by domestic tourists, explains Gümüş. "Tour agencies such as ETStur and Setur also bring in tourists daily to visit Sedir Island."

Sedir Island contains unique sand, referred to as 'drops of limestone'. Tourists are prohibited entrance to the shore by the Muğla Governorship in order to protect its unique geological structure. The beach is fenced in and visitors are only allowed to swim in the cove.

The restrictions enforced on Sedir Island, are in conjunction with the EU-supported Gökova Integrated Shore Project, and have already reaped visible results of an increase in sand.

THE STORY OF THE SAND

Legend has it that the sand on the island was brought in from Egypt on 60 ships by Antonius for Cleopatra three thousand years ago. This crystal sand is formed through conglomerating around a core of carbonated mud. Each grain is smaller than one millimeter, the same size and resembles the egg of a fish.

The color of the sand complements the color of the sea. The sand is also unique in its ability to regenerate while also burn in fire. Similar sand is said to exist on the Red Sea. The island, covered in olive trees, is not only naturally exquisite, but it also contains an ancient theater from the Hellenistic and Roman period, an agora and remains of an ancient port. The ruins are thought to be from thousands of years B.C. and from the Dor, Persian and Roman times.