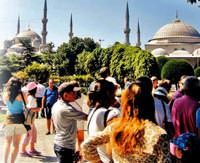 In the first six months of 2012, Istanbul drew in 4,231,000 tourists, which was an 18.7 percent increase compared to figure from the same time period the year prior.

According to figures from the Istanbul Culture and Tourism Directorate, 26.8 percent of the total number of tourists that entered Turkey visited Istanbul. While 4,052,908 tourists preferred to arrive to the city by airplane, 178,511 chose to come by sea.

Compared to figures from the same January to June period last year, the number of visitors that flew in to the city increased by 19 percent, while the number of those who came in from the sea increased by seven percent. Out of those tourists that came to Istanbul by sea, 154,485 were on day trips that docked at the Karaköy Port. Fourteen percent of the tourists that arrived by plane came in to Sabiha Gökçen Airport. The majority of Istanbul's visitors came from Germany, followed by Russia, America, France, England and Iran.