A drop in number of Iranian tourists in Turkey 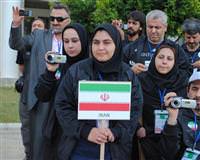 The cold wind blowing between Turkey and Iran has now begun to affect the nation’s tourism figures.

In the first four months of 2012, the number of Iranian tourists that came to Turkey dropped significantly by 37 percent compared to figures from the same time period the year prior.

According to the information obtained, the Iranian government has made suggestions that tour operators not go to Turkey this year. Foreseeing that the economic crisis in Europe may result in interrupting growth rates in the sector, the Ministry of Tourism and Culture has announced they will be placing priority on promoting in new markets.

Calculating the possibility that the effects in the economic crisis in Europe will continue to reverberate throughout 2012, the Ministry of Culture and Tourism has embarked on new initiatives in order to prevent a drop in tourist numbers and to instead increase tourist visits.

The Ministry states the following in its '2012 Performance Program':
In terms of numbers of tourists to come to Turkey, the nation continues to increase its share within the global tourism market. However, it appears that our nation's largest market Europe will continue to suffer the effects of the economic crisis and in fact may feel it even further which is expected to interrupted rates of growth in the market."