Turkey’s tourist figures on the rise 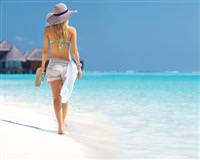 According to a listing of the top ten nations according to tourist numbers conducted by the World Tourism Organization, Turkey has gone from seventh up to sixth place, with 29 million tourists visiting last year.

TUROB Chair Timur Bayındır attributes Turkey's success to its "continuation of serious investments in order to utilize the nation's tourism resources in the best manner possible. Our joint efforts to increase the number of tourists that visit Turkey and the nation's tourism revenue continue with the Ministry of Tourism as well as other tourism establishments, states Bayındır."

In 2011, tourism revenue reached 1.030 billion US dollars, which was a 3.9 percent increase compared to the 927 billion US dollars figure from the year prior. The number of tourist entries in 2011 also increased by 4.6 percent (983 billion). In terms of spending in 2011 America had the highest spending rate at 5.7 percent. Europe followed with 5.2 percent, Asia and the Pacific came next with 4.4 percent. Africa showed an increase of 2.2 percent while the Middle East was the sole region to record a loss at -14 percent.