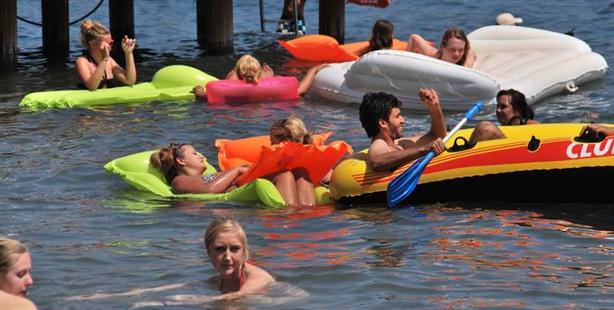 Ambassador Reddaway thanked the Muğla Governorship for their interest and assistance to the honorary consuls in Bodrum, Fethiye and Marmaris, all popular destinations for British tourists.

Explaining that the greatest difficulties experienced by the English tourists that come to Muğla mainly concerns moveable and immoveable property purchases in the popular province, Reddaway said that the new regulations coupled by the increased experience of Brits in Turkey has resulted in eradicating the difficulties that used to surface in the past. "The reason why Brits continue to return is because each time they end up gaining more experience. In the past, there used to be serious issues when it came to property sales. These would include purchases of the wrong property as well as a number of other issues. However now with the new measures and regulations, all of the problems appear to have been solved. Therefore, from here on out the previously negative situations that would arise for Brits and other foreigners trying to purchase property will probably not happen again. The Muğla region is a very favorable region for British tourists that come to Turkey."

Reddaway also addressed the drop in tourist numbers to Muğla over the past few years, which the ambassador attributed to economic reasons and the fact that Turkey is expensive. "We are trying so hard to deal with our own economic issues. Like Turkey, we are also not a part of the Euro, however the Euro zone very much wants to solve their financial and monetary issues and we support this. In the end, any monetary, financial or economic crisis that is happening there directly affects both Turkey and England," stated Reddaway.

Explaining that Turkey is expensive compared to other Mediterranean nations such as Spain, Morocco and Algeria, Reddaway says that the rise in Special Consumption Tax has significantly worked to negatively affect foreign tourists. Reddaway went on to explain, "Competition amongst Mediterranean countries is significant. From what I have heard from a British tour operator, flights to Turkey are more expensive than these other countries. For example, flights to Spain and Morocco are much cheaper. However, of course Turkey is farther away and naturally is more expensive. There is also the increase in taxes on alcohol. Compared to Morocco and Egypt, Turkey is not an inexpensive country. Bottom line is there is competition in tourism and Turkey will get its share."