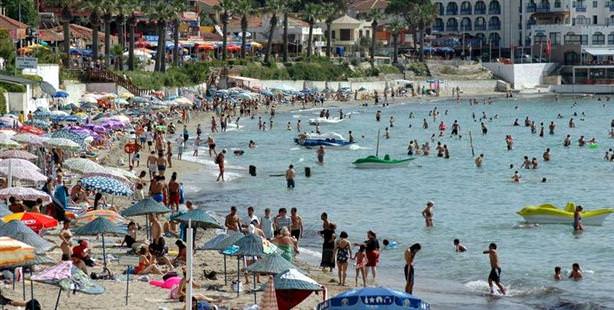 Culture and Tourism Minister Ertuğrul Günay announced at the Travel Turkey İzmir Fair that despite the troubles suffered in the region, this year’s tourism figures are still expected to surpass those of 2011.

The Travel Turkey İzmir Fair and Conference, which draws tourism representatives from all over the world, opened its doors yesterday for the sixth consecutive year.

Speaking at the opening ceremony, Minister Günay said that Turkey in its entirety provides means of tourism revenue and expressed that despite the difficulties experienced throughout the region, 2012 year-end figures are set to surpass those of 2011.

"The results coming in at the end of 2012 show that the liveliness of our tourism sector will persist. 2011 was a good year for Turkey. Due to turmoil in North African destinations the whole world turned its sights on Turkey. In 2012, Turkey faced issues within its own borders, however here we are at the start of the 12th month of the year and we have reached the threshold of acquiring figures that slightly surpass those from last year.

Going into 2013, there are still issues in this geography. By not exaggerating prices and by paying attention to cleanliness, we hope to continue Turkey's advancement into 2013. Hopefully nearing 2023, we will have reached our target of being a nation to host 50 million tourists," states Günay.

Minister Günay also explained that there were a number of plans for Izmir, including a new museum project. "Izmir is not just any ordinary city," states Günay. "Izmir's Bergama and Ephesus are both on the World Heritage List." Günay went on to explain that they have given the name 'Efes' to the new congress center being built in Kuşadası, which he explains will be the largest of its kind in Turkey and in the top 13 in Europe. The center is planned to be completed in the spring of next year, says Günay.

The Travel Turkey Izmir Fair aims to put on display the wide variety of tourism options in Turkey as well as other nations for both domestic and foreign investors, agencies, buyers and vacation planners. This year the fair hosts representatives from 20 different countries, 60 provinces and over 700 tourism firms. This year's fair hosts Kastamonu as its partner province and Nagorno-Karabakh as its partner nation. Joining the fair for the first time this year are representatives from South Korea, Indonesia, Maldives, Macedonia, Uzbekistan, Pakistan, Sri Lanka, Serbia and Oman. The Travel Turkey Izmir Fair runs up until December 9th.