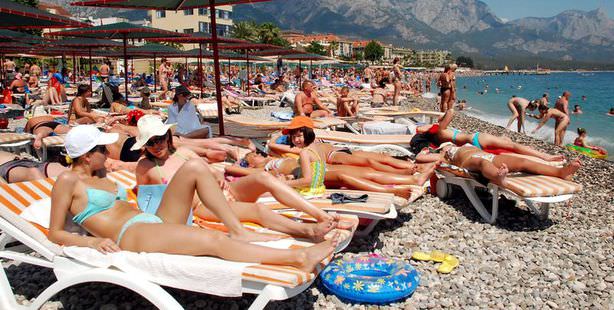 Germany, which takes the top spot of the most travel-loving population, spent 63 billion euros last year on vacations. Out of the most preferred destinations by Germans, Turkey has gone up a notch reaching the top third favorite nation preferred by German vacationers.

Over the past 12 years, Turkeys share in Germany's travel market has gone up from 4.7 to 7.3 percent.
According to the results from the Reiseanalyse 2013 study, which was recently released by the Mediterranean Tourist Hoteliers Association R&D unit German research firm FUR at the International Tourism Fair held in Berlin, Turkey is the third favorite international destination for Germans.

According to the study, which is a representative survey of the holiday travel behavior of Germans, last year, Germans spent 63 billion euros on trips that lasted five nights or longer. The overall trends followed by German travelers remained the same last year, with 76 percent of the population having taken vacations. In 2012, 31 percent of Germans chose to travel domestically.

The top three nations selected as favorite destinations for international travel were Spain, Italy and Turkey. According to a comparison of figures from 2011, Turkey and Holland were the only countries to experience improvement in their market shares.

According to the survey results, the German travel market is expected to continue to see growth next year. According to poll participants, 55 percent of German holiday-goers have already made concrete plans for travel this year. Just 12 percent of those questioned said they did not plan to go on a holiday this year. Another finding from the survey results is that 41 million Germans plan on vacationing in destinations with beaches over the next three years.