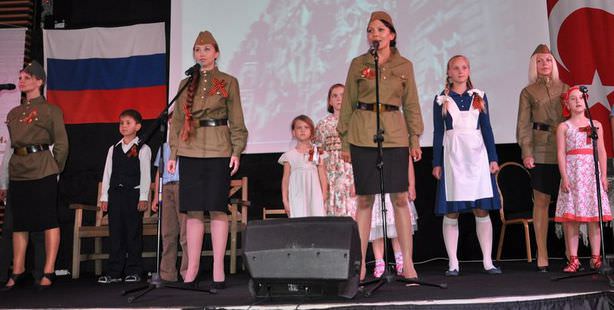 Russians residing and vacationing in Antalya's Alanya district commemorated the 68th anniversary of May 9th Victory Day, which marks the Soviet Union’s (USSR) victory over Nazi Germany, in a celebration held at the Goldcity Tourism Complex.

Russian residents and tourists in Alanya, a district in the Mediterranean province of Antalya, convened at a conference room at the Goldcity Tourism Complex to celebrate the Russian national holiday of Victory Day.

The celebrations marking the 68th anniversary of the German military surrendering to the Soviet Union and the Allies of World War II were organized by the Alanya Russian Education and Culture Association. Nearly 500 Russians came out to celebrate Victory Day including Alanya's Russian Education and Culture Association President Ekaterina Gündüz. The event included performances of Russian women donning military uniforms that sang songs and read aloud poetry. The crowd, which sang along to the performances, embraced one another in joy of the momentous event.

Alanya Russian Education and Culture Association President Ekaterina Gündüz made an announcement regarding the event stating, "Our association was able to organize this event with the support of Goldcity. Sixty million people were killed in this war that was participated in by 70 different nations. Twenty-seven million were Russians. Five-hundred people have gathered here alone. It was an evening filled with performance, history and poetry. We celebrate this holiday every year. This holiday, which is our most important day, is celebrated by us every year and we will continue to celebrate it."