Turkey becomes third in the world for most Blue Flag beaches 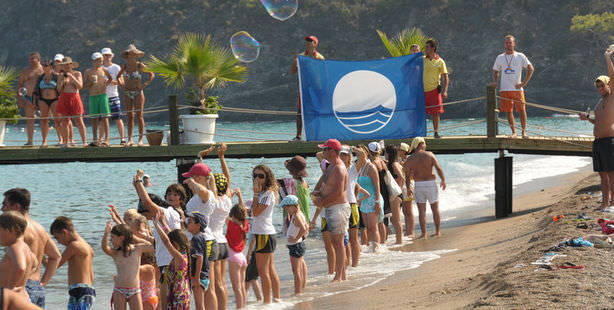 With 383 beaches, 21 marinas and 13 yachts accredited with Blue Flags, Turkey has now bumped France from its throne to become the third country, following Spain and Greece, to have the highest number of Blue Flags.

Foundation For Environmental Education in Turkey (TÜRÇEV) General Manager Erol Güngör explains that Turkey was first awarded the Blue Flag eco-label for five beaches in 1995 and states, "When we first applied for the Blue Flag award 20 years ago, there were ten countries that had been awarded and we were in tenth place. In those years, they only accepted applications from beaches in Europe, however now there are 46 countries from all over the world that have been awarded and we have made third place." Reminding that the year prior, Turkey had 355 beaches, 19 marinas and 13 yachts that met the criteria, Güngör states that with the successful progress they made this year, they have now surpassed the number of beaches awarded in France and have taken their spot in third place.

Pointing out that the Blue Flag eco-label is now the most widespread and well-known symbol of standards used in tourism all over the world, Güngör says, "The Blue Flag accreditation has become more sought-after each year by both holiday-goers and tour operators. As a result of the Blue Flag program, the safety and service quality of beaches have now increased."

Istanbul given a Blue Flag surprise

Following suit with years in the past, Antalya comes in first for being the province in Turkey to have the highest number of Blue Flag beaches at 179. Muğla comes in second with 84 Blue Flag beaches, while Izmir is in third with 36. Aydın is in fourth place with 25 beaches, followed by Balıkesir with 19, Mersin with nine, Çanakkale with six, Istanbul with three, two in Kocaeli and a beach each in Tekirdağ and Düzce have also been given the Blue-Flag eco-label.

Istanbul, whose star shines brighter every year when it comes to tourism, also increased the number of beaches in the metropolis which have been awarded Blue Flag status. Last year, only two beaches in Şile qualified for the award, however this year another beach in Şile has been given the eco-label. In order to be awarded as a Blue Flag beach, there are 32 criteria that need to be met, which are divided into four categories: Environmental Education and Information, Water Quality, Environmental Management and Safety and Services.