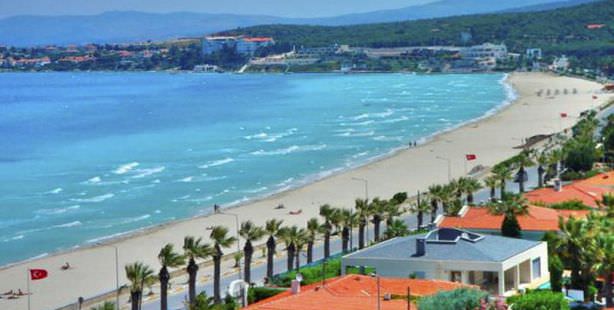 Çeşme Mayor Faik Tütüncüoğlu shared that despite the unfortunate recent developments in Turkey, they remain hopeful for this summer's tourism season and said, "Our main goal is surpass the threshold of having over two million overnight stays daily.

Mayor Tütüncüoğlu explained that the number of tourists that visited Turkey in the first quarter increased by over 13 percent compared to the year prior. Locals, including hotel operators and retailers have long been awaiting the arrival of the summer season said Tütüncüoğlu adding, "The month our retailers have been long awaiting has arrived. Our expectations for this year are higher than last year, because the 'Çeşme' brand is increasing in value daily. The truth in this is proven by the number of tourists that visit our district and the overnight stay figures as well as the valuation of real estate in our district which is now reaching record proportions.

WE ARE EXPECTING A 30 PERCENT INCREASE

Explaining that despite the unfortunate incidents that have taken place in our country as well as in the world, certain operations in the district began filling up in the spring months, reaching an 80 percent full capacity in May, Tütüncüoğlu says that the district's main goal is to increase the number of overnight stays from the 1.9 million figure reached in 2012 to beyond the two million barrage. "We are trying to bring up the number of overnight stays in our district for 2013 to 2.5 million. If we are able to meet this expectation this year, despite the developments in the nation, then we will easily reach our five million overnight stay goal for 2005," said Tütüncüoğlu.

Tütüncüoğlu says that although Çeşme is best known for being a popular sea, sun and sand destination, the district has much more to offer. The clean air, greenery, thermal springs and mud baths are just a number of specialties that makes our district a unique tourism paradise."

According to Tütüncüoğlu, the district does not make sufficient use of its thermal resources. The Çeşme Mayor explains that even though 65 percent of the hotels in the district have access through pipes delivered to their doors, less than half actually take advantage of the opportunity.
"If our thermal springs are promoted, this would provide Çeşme a big advantage in both the Northern Europe and Middle East market," said Tütüncüoğlu adding that it would also solve the difficulties of drawing in high tourist numbers in the off-season winter months.

Emphasizing that the number one necessity in order to increase the number of tourists in Çeşme is bed capacity, Tütüncüoğlu stated, "We are negotiating with some of the world's biggest tourism companies for them to bring tourists to our district regularly. However, any negotiations we try to make always fall through due to the lack of accommodation. They demand high-quality accommodation for 30,000 people, yet Çeşme's room capacity is much lower. We need at least an additional high-quality accommodation capacity of 20,000. If the development plans for Çeşme, which in some regions have been held up by the ministries for 21 years, come through and investments are realized then Çeşme will have an open horizon."