Gezi protests have no effect on tourism in Antalya 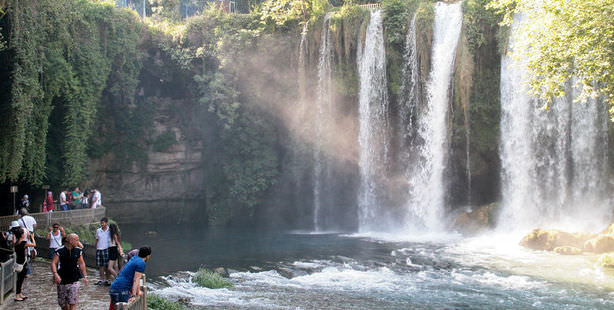 While the Gezi Park protests resulted in serious damage to Istanbul’s tourism industry, Antalya, which is widely considered to be Turkey’s “capital of tourism” has not been affected whatsoever.

According to figures from the District Department of Culture and Tourism, this year the number of foreign visitors to Antalya has increased by eight percent compared to the year prior. Foreign tourists in Antalya say that even though they witnessed the protests on television they still never considered postponing or cancelling their vacation plans. Friedrich Joussen, the new CEO for the world's largest tour operators TUI AG says, "The protests have definitely not affected Antalya. It appears that there have been no negative effects. It hasn't changed the perception of Antalya." Figures released by the Mediterranean Touristic Hoteliers and Operators Union (AKTOB) show that Turkey is displaying a much stronger performance than its Mediterranean equivalents. In terms of increasing tourism figures, Turkey has left its rivals on the Mediterranean basin, namely Spain, Greece and Egypt, in its wake. While the rise in tourist numbers in Spain was 3.9 percent, in Greece six percent and 11 percent in Egypt. The increase in foreigners to Turkey has surpassed the 20 percentile level.

While the majority of nations Turkey's has a market with saw tourist figures rise in the ten percentile level, nations such as Russia, Italy, Georgia, Ukraine and Belgium had an increase of over 20 percent in numbers of visitors. In the first five months of the year, the number of visitors to Turkey from Germany increased by 7.8 percent, reaching 1.5 million, while the Russian market which saw 23 percent growth, brought in over one million visitors. The number of visitors from Holland increased by 13.6 percent to reach 394,000. The English market had a 5.4 percent rise with 566,000.

Antalya tops the list of being the destination to draw in the highest increase in visitors. According to figures from the District Department of Culture and Tourism, as of June 25, 2013, the number of tourists that arrived to Antalya via plane surpassed four million. The rise in tourists during this timeframe was over eight percent compared to the same time period the year prior.

Vacationers in Antalya are happy. Explaining that they have been in Antalya for the past seven days, the Dina Tania-Saveli Nesterov couple, said that even though they were informed of the protests, it never affected their decision to come to Turkey on holiday.

Oleg Tarasov, who is on vacation with his wife and two children said, "We watched the protests on television, however we haven't faced any difficulties in Antalya. We are pleased to be here and never once thought of cancelling our trip."

Another couple had this to say: "We were aware of the protests. When our friends who had been here before said it wouldn't be a problem, we went ahead. We love Antalya a lot and are thinking of coming again. Antalya is a great place to bring children.