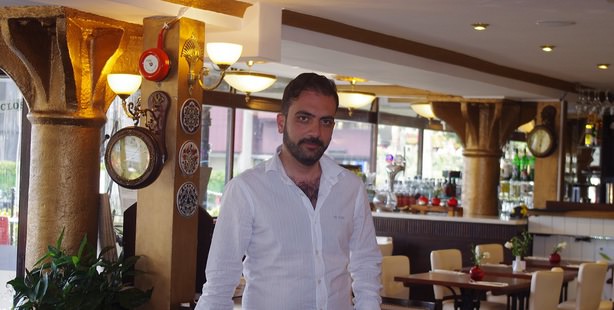 It is an extremely difficult and costly venture to open up a restaurant in the British capital of London, a hot spot for the jet-set society. Ali Eren Balıkel has managed to do just that and in one of the city's most popular areas, St. Katherine's Dock. Ali Eren Balıkel, the owner of Kilikya's and a Turk from Adana, arrived to London eight years ago with just a suitcase and a few hundred pounds. Balıkel came up with the idea of opening a Turkish restaurant in the marina, known for its million-dollar residences and high society appeal, during his graduate studies at the London School of Commerce. Balıkel quickly realized that Turkish cuisine had become the third most popular in the city, "However," he explains, "None of the restaurants here were geared towards high class. My idea was to open a restaurant that had an identity."

Balıkel says that once he came up with the idea he began working at a restaurant full-time and seeking out potential locations for his dream venture. "I came to this location where the restaurant is now, with absolutely no money in my pockets. The owner was a wealthy man who worked for IBM. He had opened up the burger joint here for his wife, however she had gotten bored of it and was trying to hand it over. When they saw my interest, they agreed to let me take over by just paying for the machinery inside. However, at that time I was only able to propose 5,000 pounds, which I said I would pay them in installments. The man saw the drive and reliability in my eyes and said, 'okay", explained Balıkel.

With a bank credit and a loan from his brother, the entrepreneur from Adana quickly embarked on getting his restaurant up and running. Diverging from the traditional Turkish restaurants in England, Balıkel decided to focus on serving organic mezes and salads. On the day of the restaurant's opening, locals seeking something different were already lined up, explains Balıkel.

Some of the rich and famous' favorites?

Cem Adrian: He comes especially for the Turkish breakfast.

Helen Mirren: Her favorite is the organic cappuccino, which is only offered in a few venues in London.

Robert De Niro: His favorites are the Turkish borek, babaganoush and cacik.

This is a translation of an article originally written by Ragip Soylu.