Tourists on the rise in Trabzon 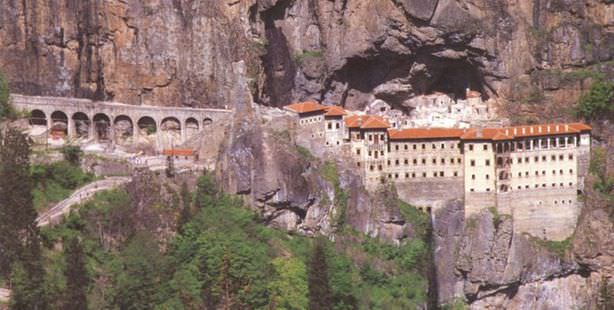 While last year 230,000 visitors came out to see Trabzon’s famous Sumela Monastery, this year that figure has risen to 300,000.

From a tourism potential standpoint, Trabzon has experienced a significant boom in visitors over the past year. Last year, 230,000 domestic and foreign tourists visited Trabzon's historical Sumela Monastery, whereas as of August of this year, that figure has already reached 300,000.

Trabzon Culture and Tourism Department Director İsmail Kansız says they have seen a 40 percent increase in the number of visitors to Trabzon this year compared to the year prior. "We can definitely say that there is a potential for tourism in Trabzon. When we look at figures from last year, we see that there has been a 40 percent increase. We are especially seeing a significant increase in the number of visitors to Sumela Monastery and Uzungöl. For example, last year as of August 229,000 tourists had visited Sumela Monastery, whereas this year that figure has reached 300,000. There is also a significant increase in the numbers of Arab tourists that visited this year. Last year, 38,750,000 Arab tourists visited our province, whereas as of this August that figure rose to 98,750."

Pointing out that this rise in Trabzon's tourism is not limited to cultural tourism or Arab visitors, Kansız says that cruise tourism has also progressed significantly. "We had 27 cruise ships visit our province. As a result, nearly 20,000 tourists aboard these cruises visited Trabzon."

Kansız explained that the increase in the number of Arab tourists has resulted in creating the perception that there is a drop in Western tourists, which he says is not quite the case. "Due to the increase in numbers of Arab tourists it may appear as if the number of western tourists have dropped. There is a drop in the numbers of western tourists all over the world, as a result of the economic crisis experienced in the West. Because our tourism industry is more focused on cultural tourism, we have not felt a significant drop in numbers," said Kansız.

HOLDING ANNUAL MASS HAS CONTRIBUTED TO THE PROMOTION OF SUMELA

Kansız also mentioned that the annual mass, which has been held over the past four years in the Sumela Monastery, has significantly influenced the promotion of the site to world tourism. "The first year, there was a significantly high attendance, however since then it has become routine and therefore in terms of visitor numbers, the annual mass has not made a huge difference, However, the masses have contributed significantly to the promotion of Sumela and its importance as a cultural legacy for Trabzon as well as the world. In that regards, the annual mass has been beneficial," said Kansız. Last year, the revenue brought in from the Sumela Monastery was 1.383 million, whereas this year as of August that figure has reached 1.670 million.