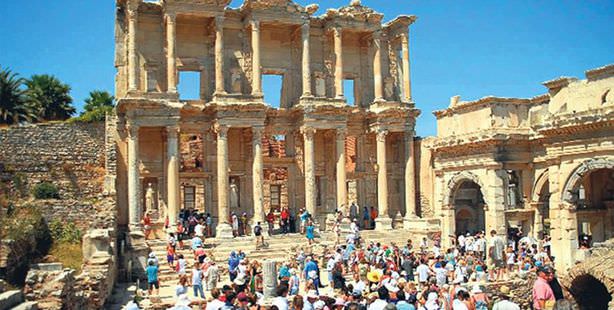 A poll conducted on the education and income levels of tourists that come to Turkey shows that 39.6% of Turkey’s foreign visitors have university degrees and 68.3% of visitors are in the middle-income range.

Turkey's Hoteliers Foundation has conducted a survey on foreign tourists that visit Turkey based on three-month figures from the Turkish Statistical Institute. Based on the report, it has been determined that a significant number of foreign visitors have higher education degrees and are of the middle-income range. According to the findings, 50.4% of tourists that visit Turkey are men, while 49.6% are women.

Upon analysis of the education level of tourists in Turkey, at 39.6 %, visitors who have college or university education degrees constitute the largest category. At 28.5%, high school and their equivalent graduates came in second. The rate of tourists who visited Turkey that had graduate school degrees or doctorates were at 13.1%. Out of the total number of tourists that visited Turkey, 12.4% had completed middle school or an equivalent eight-year education, 5.2% were elementary school graduates and 1.2 % consisted of tourists that had not completed any form of schooling or were illiterate.

An analysis of the overall income level and employment conditions of foreign visitors to Turkey revealed that 54.5% were salaried employees. Those who were self-employed constituted 16.1%, while 13.4 were retired, 6.5% were housewives, 5.6% were students, 3.4% were unemployed and seeking employment and 0.4% were in the other category.