A Grand Bazaar replica to open in Las Vegas 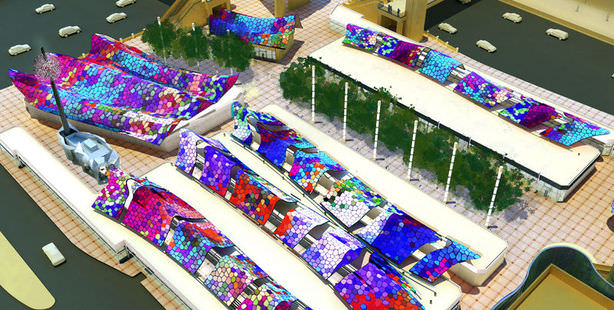 Las Vegas is preparing to open its own version of Istanbul’s historical Grand Bazaar. Construction began this week on the Las Vegas strip for the mega mall, which will contain 150 shops and is set to open in fall of 2014.

Known for its famous hotels that tend to replicate cities such as Paris, Venice and New York in its architecture, Las Vegas' newest venture is to open up an outdoor mall modeled after Istanbul's historical Grand Bazaar. Construction began this week on the Grand Bazaar Shops, which will be located in the heart of the Strip just outside of Bally's Las Vegas Hotel, and the mall is scheduled to open in fall of 2014. The mall will feature a 150 shops including a spice market, a butcher shop and green grocers as well as the first-ever Swarovski shop that will allow customers to haggle over crystals.

U.S. developer Larry Siegel, who is behind the project, which will be built on an 8,000 square meter area of land, says the Grand Bazaar Shops will have the same atmosphere as the Grand Bazaar in Istanbul it aspires to. "This will be a place filled with sounds, sights and smells where people can bargain with store owners. We could say it will be a more sterilized and modern version of the Grand Bazaar in Istanbul," said Siegel adding, " Imagine a place, which is covered with light colored tiles, where small shops stand next to each other and that sparkles at night.' Every night, a 1,800 kilo crystal ball outside of the Swarovski store will be putting on a lightshow. Meanwhile, 40 percent of the shops in the project have already been leased.

Larry Siegel says that this $50 million project will work to change the image of Las Vegas as being just a place where people gamble behind closed doors. Furthermore, Siegel says that if the Grand Bazaar project is successful in Las Vegas they may build the same outdoor mall project in other US. cities as well as maybe in countries such as Canada and Spain.