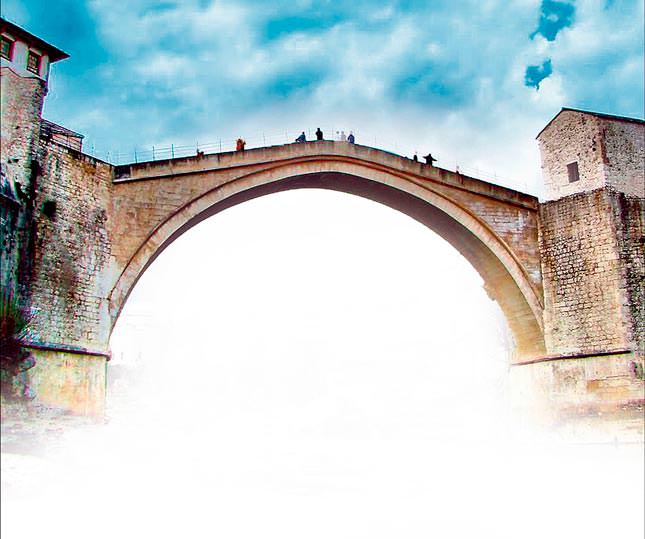 Once a symbol of Balkan hatred and devastation, Mostar's rebuilt bridge and its jovial people show how recovery and hope can emerge from ruins.

From its historical majesties to its bullet-marked buildings that line the main streets, Mostar offers its visitors a glimpse of how the city made its recovery from the devastation of the Bosnian war to its reconstruction today.

Mostar is a city in Bosnia's southern province of Herzegovina, known to the world by its iconic bridge, the "Stari Most," from which it gets its name.

My sojourn to Mostar started from a bus stop on the border between Croatia and Bosnia. The colorful houses I saw on my way to Mostar reminded me that no matter what happens, humanity will find a way to rekindle lost hopes.

Since before I set off for Mostar, I dreamed of the enchanting Stari Most. As soon as I hopped off the bus, however, I was distracted by the city's historical remains and the evident scars of years of conflict.

Abandoned, bulletpocked buildings stand with trees growing inside. Stari Most was still on my mind as I walked through the streets leading to it, hoping the beautifully rebuilt bridge would bring a measure of hope and reconciliation to the area around me.

As you approach the center of Mostar, the reality of the clashes becomes apparent. Graveyards are full of those who died during the early 1990s, the time of the war. Abandoned buildings and bullet-riddled walls serve as a reminder of the devastating conflict that swept the country.

It is obvious those living in the area do not want to forget the pains of the war and however, what we consider history is still real. The region continues to grapple with the economic, political and social effects of the Bosnian war.

Those bullets made me realize that they symbolize not only the building in ruins but also the hearts of the Mostar locals. Simply for that reason while walking down the street of Mostar, I heard the locals saying, "We will always remember."

As a tourist, to reach Stari Most, you pass through the city's historic Ottoman "carsija" (marketplace) surrounded by classical Ottoman architecture. You will be lost in time in an atmosphere that still retains the coffeehouse culture of the 16th century Ottoman Empire.

People sipping their Bosnian coffee in these coffeehouses will introduce you to the Bosnian culture that emerged as a byproduct of the Balkan and Ottoman cultures. Till this day, they still retain the traditional method of brewing their coffee with copper pots known as the "dzezva."

After you pass the locals sitting in restaurants lined up along the streets, you will come across the "carsija" lined with local merchants selling their wares, ranging from touristic souvenirs to artifacts from the war. Their shops, housed in renovated historic buildings, offer buyers unique handcrafted china tea and coffee sets, as well as the beautiful "dzezvas" used to brew Bosnian coffee. If you would like to remember Mostar when you return home, I suggest you to buy the little Stari Most souvenirs that you can find everywhere on the "carsija" street.

As you exit the "carsija," the majestic Stari Most is on your right side. Until you have seen the Stari Most, you might not think that Mostar is any different to the other cities in the Balkans. However, when you see the magnificent structure that spans the river Neretva with its eerie green waters, you will understand that you are in a place of strong historical significance.

Built by Mimar Hayruddin in 1566, the Stari Most at its peak stands 20 meters above the surface of the Neretva. The United Nations Educational, Scientific, and Cultural Organization (UNESCO) World Heritage site is a reconstruction of the original bridge which stood for 427 years before it became a casualty of the Bosnian War.

The bridge was reconstructed by Turkey in 2004 using original parts in an attempt to re-evoke the memories of the once peaceful beauty and unity that was Mostar.

Today, when you walk to the bridge, if you are there on the right day, you will come across young locals who are willing to display their hot blooded passion through the traditional display of leaping off the bridge and into the cool waters of Neretva once they collect a total of 50 euros from exploring tourists. This not a new tradition in Mostar, but one that has been practiced for decades to prove the love, bravery and devotion of the young locals who take the leap before asking for their significant other's hand in marriage.

Mostar is the only place in the Balkans, in fact, in the world, where you can see the Orthodox and Catholic churches positioned next to the Muslim mosque after much blood was spilled on that fertile soil.

There is a legend surrounding the word "Balkan" that dates back to the first arrival of Ottomans to the Balkans. The Ottomans described the area as rich in terms of honey ("bal" in Turkish). And because of the difficulties the Ottomans faced subduing the local population, the second term used to describe the region was blood ("kan" in Turkish). Hence the name "Balkan."

Although this is nothing but a legend, due to the traces of past wars and its fertile soils, Mostar stands as a manifestation of the legend on the origin of the name "Balkan." I always dream of a country in which people from different religious faiths and cultures live together in peace. The polarization of Christians and Muslims in Mostar prevents this from becoming a reality to its full extent. But there is still hope to live in harmony without any exclusion.