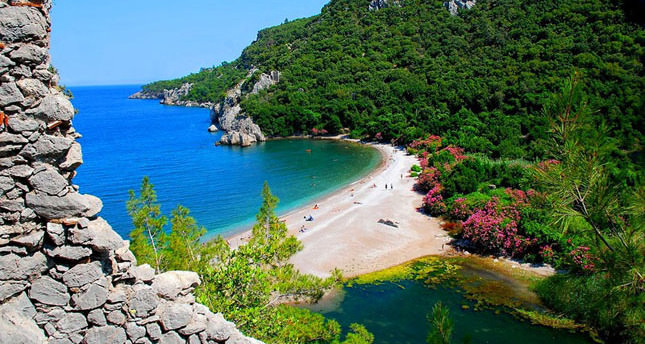 With its historical sites, fresh air and beautiful beaches, Olympos offers an escape from the crowd off the beaten track

ANTALYA – With priceless landscapes dominating the Kemer coast of Turkey, historical beauties and crowd-free beaches, the city of Olympos in southern Turkey is the most precious Hellenic legacy in Antalya.

If you take a bus to Antalya from northern Turkey you'll witness the Anatolian moorlands turning into Mediterranean warmness.
I arrived in Antalya in fall, probably the best time of year in terms of weather. Antalya's suffocatingly hot summer nights were left behind as fresh weather surrounded the city.

Olympos is nearly an hour outside the center of Antalya. Traveling through the mountains at night, Olympos embraces you in all its beauty and splendor.

Taking its name from the massive Olympos Mountain -called "Tahtalı Mountain" in Turkish- overlooking the Mediterranean coast, Olympos is an original Lycian settlement dating back to 300 B.C. Sharing its name with other mountains, Olympos Mountain was called "the home of gods" in ancient times. Greek mythology tells the story of Poseidon, God of the Sea, who looked out to the sea in front of Olympos Mountain and saw his enemy Odysseus sailing away from Calypso's Island. Poseidon then wrecked Poseidon's ship on the sea shore.With so many mountains having the same name, it is not certain from which Olympos Mountain this legend emerged.

Described as an escape from the bustle of Antalya's city center, Olympos has its own entertainment. Bungalow houses in Olympos certainly don't have the luxurious quality of expensive hotels, but they offer guests a friendly and quiet environment. Most of the bungalows offer half-board, but are ready to meet all your demands during your stay. Just a tip for those who visit during fall: ask for an extra blanket for your room as it can get a little chilly during the night at the piedmont of Olympos Mountain.

The fresh weather that wakes you up at 6 a.m. will make you feel alive during your stay. Olympos air is so refreshing that even three hours of sleep is enough.

Waking up in Olympos is easier than waking up in the city center that is drowned in the sounds of vehicular traffic and honking horns. If you wake up early, take a walk to the Olympos beach.

The way to Olympos beach is via Hellenic ruins. It is a historical site and therefore has an entrance fee of approximately TL 10. When you enter this historical site, you may feel as though you were living in ancient times with pristinely protected ruins.

The partly ruined theater is situated near the sea and the whole site will give you an idea of how people shared their happiness, sadness and lived simply with no electricity, Internet or the luxuries of modern living. This is what I like most in Olympos; simply escaping from the rest of the world.

Personally, my favorite time of day to visit the beach is at night, but be sure to arrive at the beach gate before 9 p.m. to ensure access. At this hour there is no light or disturbing rush; just trees, Hellenic ruins and nature waiting to be discovered on the way to the beach.

While walking along the beach, don't forget to look up at the sky. You will be enchanted by the Milky Way gliding right above you just like in the movies, but with a little difference: It is 100 percent real. When you arrive at the beach after walking for approximately 15 minutes in the dark guided by moonlight only, you will reach the sea and see other visitors lying on the sand, watching shooting stars. If you are at the beach at the right time, you can experience the combination of the Milky Way and the biggest full moon you'll ever see. Don't bother trying to take a photo of the unforgettable moment, as no photo can come close to doing justice to what you'll experience there.

When the weather gets chilly and it's time to head back, you can stop and grab a snack of meatballs or waffles at the little street stores. The store owners will happily chat with you and tell the Hellenistic stories of Olympos. If you keep walking, you will find lots of cafes and live music to enjoy.

For the following days of your trip, Olympos offers many options. You can hike the Olympos Mountain, bungee-jump or paraglide. There are also other activities in nearby bays to keep you busy.

A boat trip is the perfect way to explore the sea and islands surrounding Olympos. A boat tour costs about TL 40, with lunch included.
While on the boat, ask the captain to take you to the "healthy spring" - its water is believed to have healing properties and cure illnesses. If you are looking for an adventure, you can jump off the rocks when the boat trip takes you inside the Fosforlu Cave. This majestic cave has different colors in the moonlight, and sometimes in the daylight too, thanks to its geological structure.

Olympos calls you to explore its sea, history and nature. Its beauty is impossible to resist. Olympos is the perfect destination; its sun, sea and nature will have you dreaming of more.

There are minibuses from Antalya's otogar (main station for intercity buses). After hopping off at the junction on the upland section of the main coastal highway of the region, there are minibuses you can catch that depart fairly frequently.

There are numerous bungalows where you can stay, but the most popular are:

Kadir's Tree Houses, Olympos: The price includes a simple breakfast and vegetarian dinner. There is a popular disco featuring dancing around a fire. It's free for Kadir's residents except on the weekend when it costs TL 10.

Deep Green Bungalows: The owners can arrange boat tours and trekking tours to Yanartaş (Burning Stones). The rates include breakfast and dinner.