The springs that revive the dead 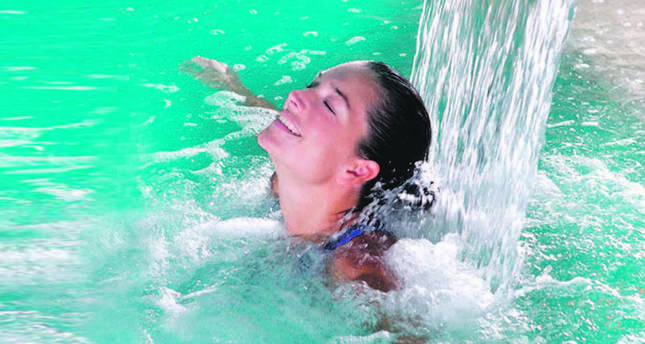 by Leyla Yvonne Ergil Mar 22, 2014 12:00 am
After spending nearly five months in the hospital following a devastating skiing accident - which left him with numerous broken bones - he was still bedridden, unable to stand on his own, never mind walk. He was exhausted by his perpetual immobility and any attempt at movement brought on excruciating pain too great to bear on his reset limbs. The accident, which took place on Mt. Erciyes as he blew through the snow, had left him in a body that felt heavier than steel. Hearing of the healing mineral water of ancient thermal springs, as a last hope, he decided to take the journey to the Kestanbol Springs, located in Çanakkale's historical Ezine district. The once active and virile man was brought to the facility on a stretcher. He had to be carried to his room and lifted into the mineral bath, in which he bathed three times a day in hopes that the historically therapeutic springs would offer some solace for his pain. On his first day at the Kestanbol Springs, he experienced the best sleep he had had in months. By the fifth day, he was able to stand on his own. By the seventh day, he had regained the ability to walk, and on the 10th day, he ventured the nearly twokilometer trek to the sea, which took him through the ruins of one of Anatolia's largest ancient cities, Alexander Troas.

After extensive hospital stays and medical treatments, it was these springs once used by Alexander the Great, Paul of Tarsus, Emperor Constantine, Sultan Süleyman the Magnificent and even the soldiers wounded in the Battle of Gallipoli, which cured him of his ailments and put him back on his feet once again.This is just one of dozens or perhaps hundreds or thousands of stories of miracle healings in these ancient thermal springs, which have a history that spans over 2,300 years. After all, these are the very same therapeutic mineral waters that local legend says Paul the Apostle used to revive a man from his death, hence these springs being known as the waters that bring the dead back to life. The Kestanbol Springs facility is located just 1.5 kilometers from the ruins of Alexander Troas, which was founded by Antigonus in 310 B.C. and has kept the name Kestanbol, meaning "Old Istanbul" in reference to the region that once vied to be made the capital of the Eastern Roman Empire by Byzantine Emperor Constantine.The buildings that house the Kestanbol Springs today, the only facilities where one can experience the over 2,300-year-old springs in our time, were first built during the Ottoman era in 1895 during the reign of Sultan Abdulhamid II. The facilities underwent renovations and reopened in April of last year. In addition to housing two indoor wading pools, the facilities have 10 private bathing rooms with oversized tiled tubs and showers for day-trippers. Overnight visitors can now stay in luxury, standard or economic suites, which also all have thermal water baths allowing guests to soak in the privacy of their own hotel room. The Kestanbol Springs offer a buffet breakfast, lunch and dinner that includes freshly picked fruits, vegetables and herbs from the facility's own organic garden, local honey, bread, yogurt, milk, free-range eggs and feta from the nearby cheese haven of Ezine. The facility also has a quaint shop where visitors can purchase regional products such as soaps, olives and preserves, and in summertime operates a fresh juice bar.

During their stay, visitors can take the 1.8-kilometer walk to the seaside, which was once the most important port between Europe and Anatolia, from where Alexander the Great would transport 10 to 15 meter-long granite columns that were manufactured in the area. Along the walk, guests will find themselves winding through the ruins of ancient Alexander Troas, once a thriving commercial center founded during the era of Alexander the Great, which includes the remnants of a bath, theater and gymnasium, and ancient walls that span eight kilometers.

At 22 grams of minerals per liter, the Kestanbol Springs have one of the highest mineral levels in the world. In addition, the springs naturally surface at a near-boiling 79 degrees Celsius. The cold water used to temper the baths is also derived from the mineral-rich springs. Due to the unique geological structure of the region, the Kestanbol Springs are one of very few that emits a sufficiently therapeutic amount of radon gas. Known for being a natural painkiller and having sedative qualities, springs that contain radon are referred to as "the fountain of youth" for their increasing cell regeneration and healing properties, and these days are very rare.Thermal springs are known for having natural healing properties for ailments such as metabolic disorders, diabetes, joint stiffness, rheumatism, arthritis, sciatica, liver, kidney and gall bladder problems, skin diseases, such as psoriasis and eczema, and even infertility.

Using the baths for inhalation therapy helps with circulatory and respiratory disorders, while many stomach and intestinal diseases are cured through ingesting the dense mineral water.

Kestanbol Springs Operating Manager Yusuf Öztürk relayed the story of the man who regained the ability to walk following a disastrous ski accident and said he has been a returning customer for the past 19 years. He shared another story of a customer who has returned every year for the past five years because it was at the Kestanbol Springs where he was cured of his cardiac arrhythmia. "This particular customer had sought h e a l i n g from thermal springs throughout Europe and Turkey, yet from the very first day he soaked in the mineral baths in the Kestanbol Springs, he felt a sense of relief and within a week, he swore he was healed," said Öztürk. Yet another customer who hails from Bursa, widely considered the thermal spring capital of Turkey, said that it was only here, in the rich mineral water of the Kestanbol Springs that he was cured of his rheumatoid arthritis.

Öztürk went on to explain that this is one of the rare springs that offers the strongest healing properties for psoriasis and said he had witnessed several cases being healed within 10 days of multiple spring treatments and said that drinking half a cup of the spring water a day relieved him of a stomach ulcer.

Öztürk suggested that guests enjoy three 15-45 minute soaks in the springs daily for at least a week if intending to cure any sort of medical ailment, a treatment he suggests should be repeated twice annually. "However," he added, "everyone stands to benefit from soaking in these mineral- enriched waters, even the healthy, as it boosts the immune system and works as a preventative measure against potential illness." Imagine bathing in the very same thermal springs enjoyed by some of the world's greatest warriors and healers alike, from Alexander the Great to Paul the Apostle. Whether you suffer from an ailment or just want to experience the same natural therapeutic waters enjoyed by many historical legends, paying a visit to the Kestanbol Springs will certainly strengthen your constitution and bring warm comfort during the chilly months of winter and can be easily incorporated into a trip to one of Turkey's many historical, popular destinations. The Kestanbol Springs are located in Ezine's Körüktaşı village, which is just 65 kilometers south of Çanakkale, 50 kilometers from Assos, 44 kilometers from Troy and just 10 kilometers from Geyikli, where boats take off daily for the popular island destination of Bozcaada. Standard rooms for overnight visitors cost TL 60 per person for full board in winter and TL 80 in summer. Private bathing rooms can be rented by the hour for TL 10 in winter and TL 15 in summer.