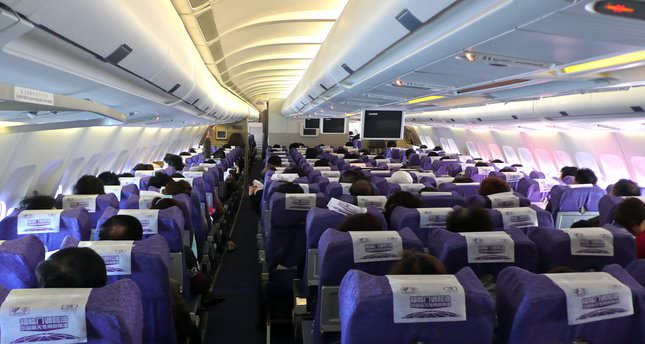 by Alanur Aydemir Apr 03, 2014 12:00 am
ISTANBUL — A holiday is something we all look forward to and often save our pennies to afford. The flight there and the plastic-tasting plane food is often the nightmare before sipping sweet beverages by the blissful blue beach. The next time you are on a flight, consider the following six amusing facts to kill time while you get there.

No smoking: Ever wondered why there was a no smoking sign on the lavatory door? It's because it conceals the unlock latch to open the door from the outside. Just lift the flap and unlock the door.

You're breathing engine air: Unless you see a mini-forest or a tree onboard, you are not breathing fresh air. The air you breathe is actually compressed air taken from the engine.
Around 25 to 50 percent of the air is blown in the flight deck. The rest is yours to breath.

It's your captain speaking: Ever wondered who the authority on the airplane is? It's your captain. He has sky-high authority to arrest people, write fines, and even take the will of a dying passenger. His authority is limitless when the doors are closed.

Fifteen minutes of fame air: There is roughly 15 minutes worth of air in the oxygen mask from the moment you pull it down. This, however, is sufficient for a good pilot to lower the altitude of the plane to a point where you can breathe normally.

People steal the lifejacket: Often we like to buy souvenirs from places we've been. An airplane should not be one of them. Though it is a punishable act, inconsiderate people take the life vests that are located under the seat as souvenirs. While air staff does a thorough check every day, a plane can do many trips throughout the day with a missing life vest before the inspection is conducted again.