Haven in midst of urban sprawl 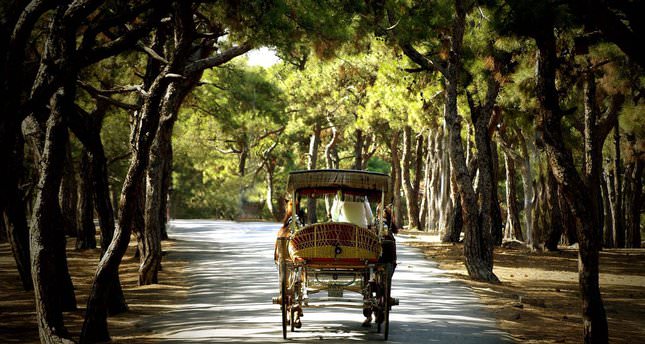 Described as a big garden in the Marmara Sea, Büyükada offers a haven for both residents of Istanbul and tourists, away from the hustle and bustle of Turkey's commercial capital

ISTANBUL — With temperatures rising and the sun smiling down on the northern hemisphere, spring, the most energizing of seasons, calls you to explore the wonders of nature. The scent of blossoming flowers and the soft breeze in the air will awaken you to realize that it is time to grab your backpack and hit the road - or more like set sail - to one of Istanbul's most pleasant points of escape, the Princes' Islands. Called "Adalar" in Turkish, at this time of the year the islands bear witness to the awakening of nature.

Located in the Marmara Sea, the Princes' Islands are actually a chain of nine small islands datıng back to the Byzantine era when they were used as places of exile.

Considering the current state and beauty of the islands, it doesn't seem like a bad idea to be exiled to such locations.

The general favorite among the nine islands is Büyükada (Grand Island), allowing you to escape the rush of Istanbul while refreshing in an exhilarating setting.

With the rain and cold left behind, do you not feel spring urging you to get up and venture to explore the gems surrounding you? Simply hop on a ferry that will take you directly to Büyükada from any one of the piers in Bostancı, Kabataş, Kadıköy or Eminönü - all at very central locations on both the Asian and European sides of Istanbul. It takes approximately one hour from Istanbul to get to Büyükada. While gliding away on the sea with the sun shining and refreshing wind blowing, you will arrive at the island before you know it.

If you are as lucky as me and my friends, you might even come by a surprise during your trip.

Traveling to the islands, we noticed a hustle and bustle as we arrived at the shore of one of the smaller islands along our route. People were busying themselves decorating a ferry with balloons, confetti and flowers. We started to think that this is a little tradition prepared for passengers. Boy, were we wrong! A bride in all her beauty and grace, her hair adorned with daisies and a group of well-dressed ladies along with five musicians hopped on the ferr y to meet her better half on our destined island, Büyükada. It was one of the most romantic wedding ceremonies witnessed by everybody on the ferry that day. Once the ferry arrived at the island after an entertaining ceremony during the ride from one island to the other, the groom was waiting for his bride at the pier. Everybody was chanting "Kiss! Kiss! Kiss!" in unison with fly-away confetti and flowers raining upon them.

Leaving this nice wedding ceremony behind us, we stepped onto this fascinating and fully preserved island.

The first thing I noticed was that there were no cars, no traffic, no honking, but horse carriages, bicycles and people getting around on foot. Apart from ambulances and police vehicles, transportation on the island is by horse, bicycle and walking just like the olden days - the very reason the island is an escape point for both tourists and residents of Istanbul.

A nice journey on the island gives one a sense of how life was, away from the hectic city life we have to face every day. Along with the horse carriages and bicycles instead of cars and buses, there are pretty villas with their façades embraced by flowers in an array of colors instead of tall skyscrapers. The only sound you can hear while walking down the narrow streets of the island is the sound of horse hooves and bicycle bells. In line with the island's tradition, you can rent bicycles from the many little bicycle shops on the island for a small fee. Beware though, riding a bicycle on the island is not as easy as it seems. You need to take into consideration the horse carriages, the pedestrians and, last but not least, the many slopes that need to be overcome.

It is a tough task to cycle uphill, but that is not the only difficult in the trip uphill. Since there are no traffic lights or rules, you basically need to be aware of any horse carriages, pedestrians or other cyclists that may pop up in your way. It's quite common to see cyclists walk the bike uphill then ride it on more flat and downhill roads.

If you're a picnicker, don't forget to buy your provisions from one of the many bakeries and delicatessens along the shopping strip of the island before you make your way to the top of the hill for a most enjoyable picnic activity in pine groves. Once you reach the top of the island, you are welcomed by a breathtaking view of the Marmara and other islands. So serene, so beautiful, so isolated from the rest of the world and in nature alone. You can picnic, light up a barbeque or simply take a breather.

When you are ready to head back, that is where the fun begins! Cycling downhill feels like riding to heaven through narrow streets flanked by either untouched pine-forests or fine, wooden Victorian cottages adorned with charming flowers and their reviving fresh scents.

Cycling the entire island can actually occupy your entire day and if you do not have that much time or you are in a lazy mood, you can simply take a horse carriage to see the island. You have the option of a short or long route. For those who are interested in historical sightseeing, the island promises to satisfy your expectations with its historic churches, monasteries and mansions. As soon as you set foot on the island, you are greeted by a historic Ottoman kiosk-style ferry terminal dating back to 1899. You can also visit the historic Hagia Yorgi Church, which is pretty renowned on the island, and the Greek Monastery of St George, located between the two hills of the island.

Another option for those who would like to swim is the island's tiny but crowded beaches. If you are lucky and the weather is sunny enough, the beaches will make you feel as though you were a born-and-raised islander, because no island journey is complete without swimming along the coast. The numerous little restaurants and cafes across the island's pier are ready to appease the hunger and quench the thirst of those who become exhausted after pedaling a bicycle around the entire island, as did our group. After all the effort of cycling, we threw ourselves into the first little restaurant we saw. Traditional Turkish dishes combined with the island spirit offer you a satisfying meal to enjoy while regaining energy. If you are looking for a refreshing taste after your meal, you can stop by the little café near the pier and buy a gelato cone - but beware, there are almost always long queues.

When it comes time to say goodbye to the island, you will probably feel both tired and satisfied. Once you experience what it feels like to escape the hustle and bustle of the city, even for a day, I am pretty sure that you will keep coming back to visit the Princes' Islands for some more piece of mind. One last thing: Remember, there are eight more islands in the Marmara Sea waiting to welcome you with all their beauty.
Last Update: Apr 12, 2014 1:07 am
RELATED TOPICS