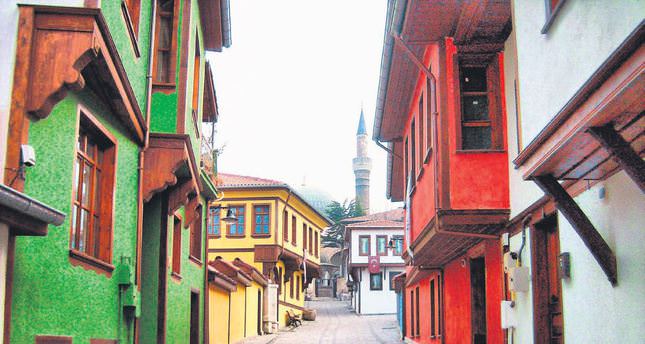 Sometimes all you need is a small, quaint and relaxing place to escape the tiresome schedules of Istanbul and Ankara. Eskişehir has never been closer

ESKISEHIR — With the High Speed Train construction nearing a close, there are no excuses for not traveling to the Old City - the literal translation of Eskişehir. Picture a relatively small college city booming with life and colors. A serene town with all the allures and facilities of much larger cities, Eskişehir has much to offer its visitors.

Located between the provinces of Bursa and Ankara, Eskişehir gives the residents of these metropolises an easy retreat with a bus from Bursa taking little over two hours while a train from Ankara will reach the city in just one hour.

With the construction of the High Speed Train line between Eskişehir and Istanbul coming to completion, the once five hour bus ride will be replaced with a two hour train ride.

This Anatolian Gem has long been symbolized by the Porsuk River which runs through the city. The waterway was once a run down and unattractive part of Eskişehir but now due to redevelopment, restoration and beautification projects, the banks of the Porsuk River have become a favored hangout for students frequenting the various cafes, bookstores and restaurants.

As the social hub of the city, any visit to Eskisehir should start and end with a walk along the banks of the Porsuk. The youth and vibrancy are tangibly in the air during every step.

Watch the performances of many university street performers, grab a coffee, sit down and relax with a sheesha (water pipe) or join a table of students for a game of cards and let the exhaustion a n d woes of the city roll right past you.

A much-advised gondola or horse drawn carriage ride provides the most compelling view of the beautiful urban scenery, at either day or night.

For the history lovers, Eskişehir's eventful past of over 3,000 years and three empires will pique the interest.

Relics from the ancient imperial periods of Greece and Byzantium spring out at every turn in the melting pot and meeting point of competing cultures.

Rivaled only by the personal collections of the Ottoman Sultans found in Topkapı Palace, the Museum of Glassware Arts has an extensive display of fine crafted glass and crystal works from around the world.

The old Ottoman summer houses in Odunpazarı, having been restored to their former majesty, offer guests a chance to see how the empire's upper crust spent their summers away from the blistering heat of Istanbul.

The lush residences give a firsthand insight into what life might have looked like for the generals and statesmen of the Ottoman Empire at their most relaxed state, away from the frontiers and the courts.

Fed up with history? Want to just go somewhere quiet and enjoy the rays of the sun or a nice quiet read? Unlike many of Turkey's other developed urban centers, Eskişehir is home to a number of large parks, all perfect to wind down and toss away your stress.

Home to ornate Ottoman houses, Şelale Park has an expansive area of greenery that earned its name from the unique manmade waterfall that sits at its heart.

Placed on top of a hill, the structure overlooks the entirety of the city. Lightshows incorporated into the falls can be seen from the town below and only add to the majesty of the scene.

While Şelale might be about the aesthetic, Bilim Sanat Park is for the more keen-minded.

Perfect for tourists accompanied by their children, Bilim Sanat Park - Science and Arts Park in English - can keep the young ones happy and occupied for hours on end.

A Disneyesque castle, a pirate ship, dinosaurs, sailboat races and many small cartoony surprises will give your children a day to remember.

Last but not least there is Kent Park. Located in an oasis in the middle of the dry plains which separate the mountains of Bursa and Ankara, Eskişehir has been given a unique artificial sea.

Here you can have all the fun you would at a traditional beach, without the crowds and litter. Lie down in the hot sand, take a swim or a nap and let the weekend lazily slip away. Kent Park is the largest of Eskişehir's public areas, and also the liveliest.

Play a pickup game of soccer, walk around the extensive walk way, feed the koi fish in the pond or have a gelato, take your pick. Since Eskişehir is home to a large number of Crimean Tatar diasporas, the local menus are unique and surprising.

Their traditional dishes, most notably Çiğbörek or delicious pie in Tatar, are famed in Turkey and can only be truly appreciated in the nature of this city.

The Crimean Tatar Çiğbörek restaurant in Kent Park is one of the best places in the city to try this, literally, delicious cuisine. Though the dish is offered across the country, only in Eskişehir will you find the traditional preparation of what is one of Turkey's favorite meals.

The Çiğbörek of Eskişehir is so well renowned in the country that it is not uncommon for those on long road trips to stop by the city center just to have a bite.

History, youth, relaxation and serenity can all be found in this relatively small gem of a city. With easy transportation, cheap hotels and a plethora of ways to escape the chaos of larger city life, Eskişehir makes for the perfect small weekend getaway.