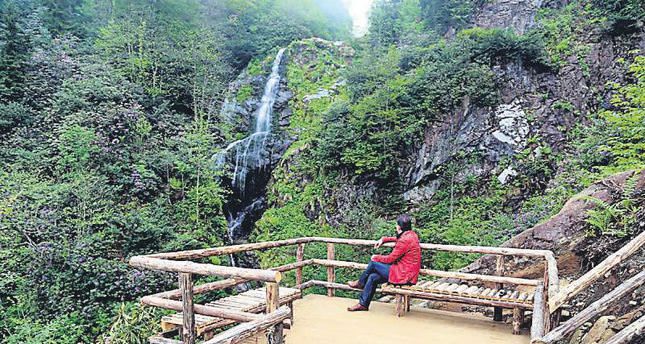 A nature park located on the Handüzü Plateau in the district of Güneysu, Rize is the new hotspot for enjoying nature

RIZE — The Arapdüzü Nature Park, which will soon be open to the public, was constructed under the Governorship of Güneysu with support from the Eastern Black Sea Development Agency (EBSDA).

Covering an area of almost 300 acres with an altitude of 1,800 meters, the park was established within the borders of the village of Kıbledağı (Qibla Mountain) and consists of an 800-meter hiking trail and wooden suspension bridges.

Visitors can walk up about 200 meters to reach a hill where a terrace offers breathtaking views of surrounding landscapes and is embellished with a historical fountain and a serander, a rectangular wooden larder unique to the Black Sea coast and used to store grain. The historical fountain reminds one of Sarajevo's Başçarşı Brotherhood Fountain constructed in 1753. Speaking to reporters, Güneysu Governor Gökmen Çiçek stated that 95 percent of the Arapdüzü Nature Park is already complete and has been designed as a hiking and picnic area for local and foreign tourists.

The Eastern Black Sea welcomes foreign tourists mostly from the Middle East. "The Güneysu district has become an attraction center for Arabs as it is the hometown of Prime Minister Recep Tayyip Erdoğan," said Çiçek. A total of TL 1 million was spent on the park, which was constructed in 8 months, he said.

The nature park is situated a 15-minute drive from Güneysu and 20 minutes from the city center. "The Arapdüzü Waterfall enriches the spectacular scenery. Visitors can enjoy a refreshing atmosphere in our tea gardens," Çiçek added.

There are no official historical findings about the origin of the name Arapdüzü. According to elder local residents, Arab traders passed through the region and rested there. Hence the name of the site, Arapdüzü, meaning "plains of Arabs." Governor Çiçek said he would be inviting the prime minister to visit the park.
Last Update: May 16, 2014 1:38 am
RELATED TOPICS