Stuck in the middle with you in Istanbul's traffic 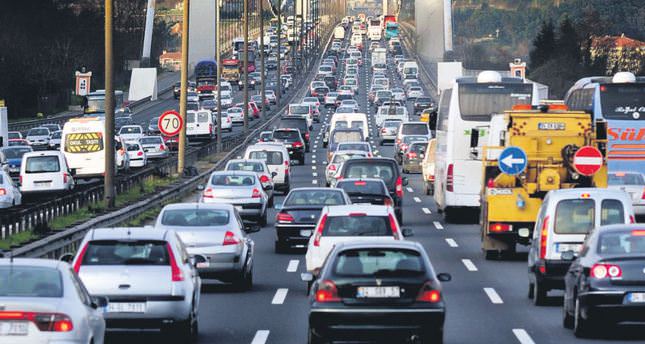 Traffic the world over is intolerable but traffic in Istanbul is unbearable. Help is on the way in tha form of a new app for commuters in Turkey's largest city

ISTANBUL — With a population of over 14,000,000 tucked into a space of 5,512 square kilometers it is fair to conclude that space in Istanbul is rather limited. Once you put 3,112,070 cars - some 20,000 new ones every month - along with 5,187 public buses and 17,395 taxis into the equation, traffic becomes more important than weather and what to wear. Commuting in Istanbul is cumbersome and challenging.

Getting from point A to point B, which may look quite close on the map, can take much longer than expected due to the traffic congestion. The Dutch manufacturer of TomTom, revealed in their latest "Congestion Index" report that the city of Istanbul was on top of the list for the highest traffic congestion in European countries. Istanbul came second to Moscow who had a traffic congestion rate of 65 percent, leaving Istanbul with 57 percent and Rio de Janeiro in third place with 50 percent.

In order to combat this dilemma, the government has taken numerous measures to ease the pain and stress of commuters. The Marmaray, a new undersea rail transport system that takes commuters between the European side and Asian side makes it the first standard gauge rail connection between Asia and Europe. The construction that began in 2009 and concluded in 2014 due to unexpected delays, now transports approximately 80,000 people each day. Though this eases traffic significantly it is far from the solution Istanbul needs to resolve the problem.

The introduction of smartphones and applications, have also been created to assist with this problem. Developed by the Istanbul Metropolitan Municipality (İBB) seven years ago, the mobile traffic app has become one of the most popular applications among Istanbul residents.

Racing against time, metropolitan people do not set off without checking the app. The instantly available status of highways makes your driving decisions smarter.

How it works
The users can access the latest traffic info customized for different districts. To minimize Internet bandwidth, live camera images are updated every minute and displayed in three successive parts. The traffic sensors on major highways continuously provide information on your device.

The app offers alternative routes based on current traffic flow and estimated duration of your trip. Additionally, the program notifies you through an auto alarm when congestion reduces on a particular highway. The map-based application does not offer language selection for foreign tourists, yet they can access road conditions manually or by entering the location address.

Accessible to people with disabilities
The app offers a video chat system for people with hearing impairments. Such users are forbidden to use the app on the road, however they can call the İBB traffic control center to receive information. The 2014 Transport Research Arena Conference held in Paris announced the İBB program as the best traffic application system on the Internet and mobile platforms. Compatible with android and windows systems.
Last Update: Apr 16, 2015 12:53 am
RELATED TOPICS