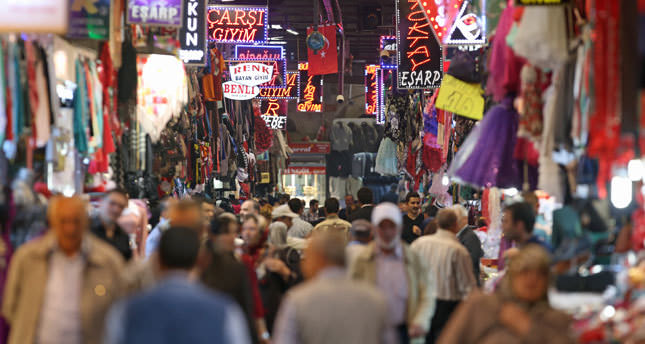 Kayseri's 800-year-old Grand Bazaar, with its 600 shops focused on a variety of goods, is as operational today as it was in the Middle Ages

KAYSERİ — Kayseri Grand Baza ar was built section by section starting in the 12th century and embraces a numerous variety of shops. Although it is not certain whether the market was covered in earlier centuries, it never lost its importance despite the many years since its foundation. Although new shopping malls continue to pop up every day, the market is still a frequented site.

Head of the Kayseri Grand Bazaar Shopkeepers Association Mehmet Tepe said, "As the old saying goes, our customers would not buy from the common market place and customers of the market place would not come to us. Many shopping malls have been built in the city but I do not think they will affect our business."

In his interview to Anadolu Agency (AA), Tepe said the market, where he himself served as a shopkeeper for 25 years, was built in the 13th century for commercial purposes only. Stressing that trade has been ongoing in the market for 800 years, Tepe explained that the market has an established clientele who prefer not to buy from the common markets. He further stated that with Turkish people who live abroad returning to their hometown for the summer holiday, the market becomes an even livelier place than in the winter.

"When we ask our citizens coming from European and other countries why they prefer to visit the Kayseri Grand Bazaar, their answer is always the same: 'There are bigger malls in Europe, yet we feel like shopping here in a warm and friendly atmosphere as this is the tradition we inherited from our ancestors.' The shopkeepers in the market are extremely friendly and as long as we have such warm and polite shopkeepers here, I believe the new shopping malls built in the city would not impair our business. Further, our regular customers would not give up on their shopping habits easily, especially given the uniqueness of the goods sold in the market," Tepe remarked.

He further added that the market appeals to any type of citizen. "People prefer it here due to fair prices. Besides, our people want to buy from friendly shopkeepers. Keeping the face-to-face contact alive, the joy of bargaining and stopping for a tea in the middle of your shopping experience is something you cannot achieve in a shopping mall. That is why the customers prefer us."

Hikmet Benli, who has been a shopkeeper for 72 years in the Kayseri Grand Bazaar, said, "This place has its own tradition. The market is an important center. People come here to shop with fair prices. Moreover, they have the opportunity to bargain here as opposed to the malls. Local people in Kayseri would not buy without bargaining."

The market has an interesting story. It was built in the 13th century and grew in time with newlyadded structures. It consists of streets organized in the directions of north-south and east-west and, at the same time, in perpendicular directions. The market was seriously damaged in the past due to fires. It was thoroughly restored between 1987 and 1991. With nearly any kind of goods available, the market maintains its importance for trade in Kayseri with nearly 600 shops in total.
RELATED TOPICS