A day in Assos 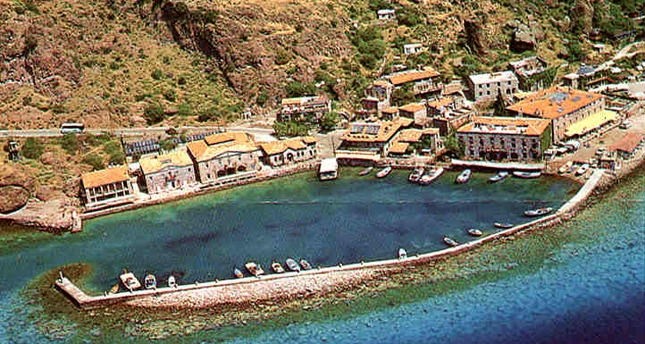 Assos is a tranquil Aegean-coast seaside resort situated among ancient ruins with a legacy dating back to the time of Aristotle. The beauty and splendor of this historical place is sure to take your breath away

Assos, an Aegean seaside resort and historically wealthy town situated along the Edremit Gulf in Canakkale Province, is a remarkable destination worth visiting and a perfect location for a weekend getaway or an overnight stop combined with a trip to Gallipoli, Troy, Bozcada or Ayvalık. The region itself boasts endless coves and quaint villages set up against Mount Ida in the background and the Greek isle of Lesbos on the horizon. The scenery warrants a longer stay, however, the following is the ideal itinerary to visit Assos for a day.

Once home to Aristotle, where he set up an academy thousands of years ago, Assos, now officially named Behramkale, comprises three distinct settlements offering visitors the diverse experience of wandering through a cliff-top village, frolicking through ruins crowned by a temple to the goddess Athena, taking a dip near the sandy beaches of Kadırga and enjoying a picturesque evening at the old harbor.

The earliest history of Assos is thought to date back as far as the early Bronze Age, however colonists from Lesbos founded the city around the ninth century B.C. Its greatest prosperity was enjoyed under Hermeias, who also ruled the Troad and Lesbos. A student of Plato, he decided to put into practice some of his teacher's ideas about the ideal city-state and encouraged philosophers to live in Assos. Aristotle lived there from 348 B.C. to 345 B.C., during which he opened an academy and married Hermeias' niece.

Assos' glory days came to a quick end however as the Persians crucified Hermeias and Aristotle was forced to flee for Lesbos. Alexander the Great pushed the Persians out in 334 B.C. and later the city was ruled by the Kings of Pergamon before becoming part of the Byzantine Empire.
St. Paul also visited Assos during his third missionary journey.

Now, Assos is a tranquil coastal resort surrounded by ancient ruins and an endless horizon on the Aegean. In Assos, the first thing you'll want to do is to start the day off by visiting the village of Behramkale. Wind your way up the cobblestone streets lined with stone houses to reach the Temple of Athena. Although the road is steep, the colorful galleries, artisan shops and stalls set up by locals selling souvenirs, jewelry and indigenous products such as soap, olive oil and herbs help ease the journey upward.

The Temple of Athena is situated 238 meters above sea level on a volcanic crag, offering a spectacular aerial view of the Gulf of Edremit, the azure Aegean Sea and the Greek isle of Lesbos. The Doric temple built in 530 B.C. still contains six of its original 38 columns. Many of the sculptures and reliefs however are now in the Archeology Museum in Istanbul, the Louvre and the Museum of Fine Arts in Boston. Right next to the entrance to the Temple of Athena is the 14th century Ottoman Hüdavendigar Mosque.

Descend back down through Behramkale and onto the road leading to the harbor to the ruins of ancient Assos, where there is a well-preserved fourth century B.C. city wall with a 14-meter high tower, a second century B.C. agora, gymnasium, council house and an ancient theater with a stunning backdrop of the Aegean that once sat 5,000 spectators and dates back to the third century B.C. The necropolis contains tombs made of stone believed to have properties that decomposed a body in 40 days, hence the name sarcophagus, which literally means "flesh eater."

By this point you will be ready for a swim off the long stretch of sandy beach in Kadırga Bay. Located just four kilometers from the village of Behramkale, there are a variety of summer establishments including restaurants, campsites to fancy hotels spread out among olive trees in what was once a cove where Ottoman galleys would pull into.

In the evening, head down to the Assos harbor, known as "liman," for a meal of fish and mezze at the popular Uzun Ev or any of the fish restaurants lining the harbor in the picture-perfect setting of what was once a key Troad shipping port.

How to get there: Having a car is definitely ideal for a trip to Assos as the sites are somewhat spread out and require tourists to climb hills. Buses from major cities will drop you off in Ayvacık, a small market town 25 kilometers north from where there are minibuses that run to Assos. The closest airport is in Edremit and BoraJet offers a free service to Ayvacık, which also hosts an authentic and lively Friday market worth checking out.

Where to stay: If you choose to stay in the heart of the hilltop village, Assos Sunset Boutique Hotel offers the most stunning view, while Assosyal has the ambiance. There are about half a dozen upscale hotels converted from warehouses in the harbor including Grand Assos and Kervansaray. Kadırga offers a more relaxed option with a range of accommodation spanning from camping and bungalows, the nicest of which is Beyaz, to fancy hotels such as the new Barbarossa.

Philosophy Days in Assos: Philosophy- lovers will be gathering on Monday in Assos for a meeting of the nonprofit organization Philosophy in Assos to revive the region's legacy of hosting philosophical debates. Professors from a number of universities in the U.S., England and Australia will be pondering philosophical issues of the mind in a series of talks, which will be held from June 30 to July 3. The lectures will be in English and on Wednesday a classical music concert will be held in the theater. Visit www.philosophyinassos.org for more info.