Heaven in the sky: Artvin 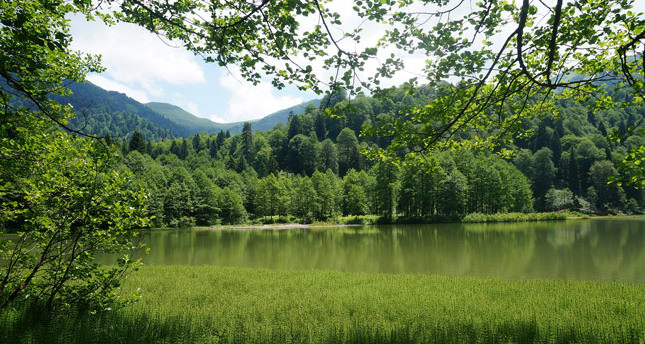 by AA Jul 05, 2014 12:00 am
Staggeringly rich in natural sites, the northeastern city of Artvin on the Georgia-Turkey border distinguishes itself from other Anatolian cities with its unique geographical and cultural structure. It is located in the eastern Black Sea Region with a 34-kilometer coastline. Artvin's intact nature captivates the hearts of tourists. Described as "the city of peace," 55 percent of Artvin is covered with green forests. The city stands out with 30 rivers, numerous lakes, vast slopes and high mountains reaching the sky. It is one of the most important nature tourism destinations, where the 34th Kafkasör Culture, Tourism and Art Festival took place between June 18-22 this year. Famous for its bullfights, the festival was held on the Kafkasör Highland with an abundant capacity to promote ecotourism.

The Artvin Governorship and Municipality recently hosted the National Media Center to turn the city's finest natural treasures into an opportunity. Impressed with the hospitality of Governor Kemal Cirit and Mayor Mehmet Kocatepe, the invited journalists took a five-day city tour around Artvin.

Among the striking natural sites is the Karagöl Lake surrounded by a must-see national park situated in the district of Şavşat. The Karagöl Lake, where gigantic mountains and heavy fogs are unable to cover its attractiveness calls tourists and says "Visit without harming my beauty." To fully enjoy the spectacular landscape, tourists should scour Artvin's every town from Şavşat, Hopa to Borçka and Arhavi embracing numerous natural wonders including highlands, lakes, rivers, villages, parks and plateaus. Cirit said those who are fed up with summer tourism at hot beaches and are seeking alternative destinations should consider the northeastern province.

"If you are searching for a heaven on earth, you should definitely see Artvin," Cirit said. The area is expected to become an important tourism stop in the future. Cirit further pointed to Artvin's ecological diversity with a wide range of endemic plants and natural formations, promising rich opportunities for tourists. The mountainous city contributes to Turkey's democratic culture with its history as well.

The "Sarp" border gate opens the way to the Caucasus, from which almost 18,000 people enter and exit on a daily basis. The border gate allows Turkey to trade with the Caucasus countries. Cirit also announced the governorship is planning to start "Altınboğa" (Golden Bull) film festival soon. The officials are working hard to advertise Artvin through not only its natural beauty, but also cultural events. Mayor Kocatepe extended an open invitation to visit Artvin. "Your one-week holiday will be enough for the rest of the year," he said.

The metropolitan municipality gives priority to sustainable tourism through respecting nature. Artvin is a suitable place for family hostels and mountain tourism, where tourists can go hunting. Kocatepe highlighted the need to develop infrastructure, transportation and accommodation facilities in an area formed under harsh geographical conditions. The municipality continues their work slowly but surely. It is planning to establish the Artvin Tourism Association that will organize daily or weekly tours in Artvin and its districts.