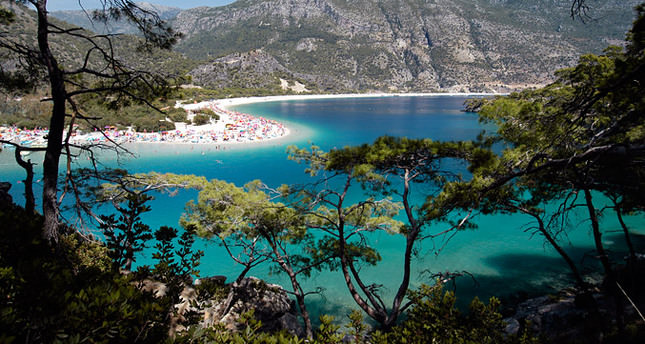 Turkey, with its turquoise waters, historical ruins and wellkept bays on the Mediterranean and Aegean coasts, is known as a heaven on earth. While it appears that there is a Riviera almost everywhere on earth now, Turkey is definitely one of the countries that deserve the "Riviera" title. Sailing on the Turkish Riviera is referred to as a "Blue Voyage," which was given the name by a Turkish writer known as the Fisherman of Halicarnassus who introduced this term to Turkish literature to express his love of Turkey's vivid blue seas.

Hundreds of tourists every year come to Turkey to embark on these Blue Voyages and discover many of Turkey's natural wonders. Some visitors rent a private yacht and cruise along the Turkish coast from the Aegean Sea in the west to the Mediterranean Sea in the south. What makes these cruises different from others around the world is probably the gripping feeling one experiences sailing east and west, south and north, to finally meet in a perfect spot, Turkey.

Thanks to its geographical richness, there are numerous historical remains along Turkey's coast and most of them have been well-protected for years. For those who want to experience history and modernity, rush and serenity together, then a Blue Voyage is a lavish activity that you should not miss during your stay in Turkey. While you are on the cruise, nature will give you a chance to catch what you miss in the fast-paced city life. You can lie on the deck at night and wink back at all the stars while listening to the water lap up against the yacht.

When your yacht sails on the sea, you will see how it feels to cut all your ties to land and discover a completely different world than the one you witnessed as a landlover.

Some of the best things you can do when you take a Blue Voyage are gaze at the sea for hours, swim in the water, sleep and sunbathe. You can also discover nearby canoes, do some adventure sports like water skiing, jet skiing and banana riding when your yacht is anchored.

Compared to the Italian Riviera and the French Riviera, Turkey is more affordable without making any concessions on quality. While it is affordable for people who are looking for an economic Riviera, Turkey is also a magnet for multimillionaires' megayachts, attracted to its marinas and coasts. During your sail in Turkey, there are also many fantastic spots for underwater diving activities. Here are some Blue Voyage tours that you can take
during your Turkish Riviera experience.

From Göçek, a small town in Fethiye district of Muğla province, you can sail on a 15-day nonstop tour to discover the hidden secrets and fascinating views of Turkish coasts. Göçek, hosting six significant marinas, is a great, eye-catching destination to start your cruise.

When you start your cruise in Göçek, you will visit the traditional Datça peninsula, traced by small bays and coves. When your 15-day tour finishes, your yacht will be anchored at Bodrum, probably the most well-known touristic spot on Turkey's Aegean coast. It is filled with many touristic attractions, beautiful beaches, historical site luxury hotels, restaurants and an intensive nightlife. Described as "the land of eternal blue," Bodrum attracts a diverse population of holidaymakers who stroll along its long palm-lined waterfront as elegant yachts crowd the marina.

The Göçek-Kekova Blue Voyage which starts from Göçek and ends in Kekova will let you see famous Turkish destinations, including Ölüdeniz and Demre which is accepted as the birthplace of St. Nicholas. Ölüdeniz, as an attractive spot for paragliding, where you can watch paragliders in the sky while enjoying a swim in the water.

The last destination will be Kekova in the southern city of Antalya. Kekova is a region that boasts mesmerizing islands and being among the nominated properties on the UNESCO Tentative List, Kekova includes bays, islands and the historical remains of Lycian settlements, including Teimioussa and the sunken city of Simena. The Kekova region was declared a Specially Protected Area in 1990 to protect the region's nature, culture and geography. In ancient times, Kekova was a small fishing village. Today, hosting different civilizations, Kekova is one of the
top tourist destinations in the country.

Focusing on the Mediterranean coast, this eight-day Blue Voyage will allow you to visit and discover the most wellknown touristic destination of Turkey, Antalya. While you are starting off on your cruise you will see the elegant Antalya marina and all its yachts anchored in the Mediterranean Sea. You will drop anchor at the bay of Kekova and then head towards Kaş, accepted as one of the most untouched touristic spots in Turkey. You can experience diving activities in Kaş. With more than 25 diving sites, it is one of the most suitable places for diving in the country and is included in the world's top 100 diving destinations.

This Blue Voyage is the combination of two different countries with the same vivid blue sea. Starting from Turkey's Bodrum, the cruise heads towards the Greek islands. The first route of the cruise is Rhodes, a Greek island in the eastern Aegean Sea. Rhodes Island is one of the Seven Wonders of the World and needless to say, is a World Heritage Site.

From Rhodes the cruise will head towards the Symi island of Greece. Being part of the Rhodes regional unit, Symi has a picturesque view
that seems to go beyond true beauty.