It's time to hit the road on the Turkish coasts 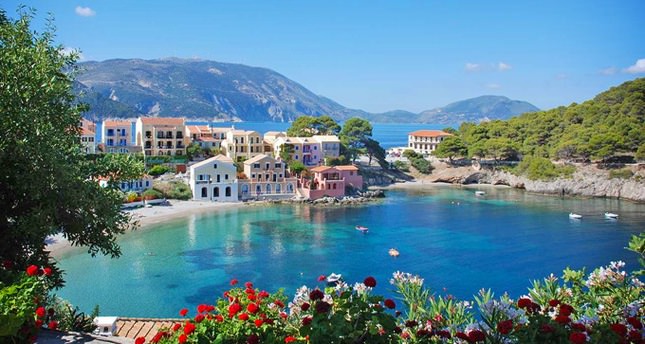 Sometimes, we all want to prepare a back-pack, and hit the road to discover what endless paths bring to us. If you have this irresistible urge to experience a summer trip while turning the volume up of "Hit the Road Jack," Turkey can be one of the most remarkable spots for your summer holiday.

With its winding roads offering sun and natural wonders at the same time, a road trip in Turkey will take rank among your top 10 unforgettable holiday experiences because there are lots of things to see in Turkey, and the best way to do it is a road trip. The Turkish coastline - starting from the Aegean coast, and stretching to Mediterranean coast - will let you see both hidden Turkish gems as well as the country's most crowded and entertaining holiday destinations.

You should plan a route on a map, both to not get lost and to not miss holiday points that offer you the heavenly beauty on earth. We have prepared a list that will help you discover what holiday spots should be visited before the season ends to turn your summer trip into a fascinating adventure. The Aegean coastline is generally regarded as the most popular destination of road trippers who turn road trips in Turkey into a tradition. You can rent a car or take your own and start your dream travel!

Cunda Island is located where the Aegean Sea starts. Even though it is called "island," you can reach this fascinating island by your car. Cunda Island, which means "Fragrant Island" in Romaic thanks to the silverberry fragrance surrounding the entire island, is a point that should not be missed.

While most tourists visiting Turkey are too busy visiting crowded destinations, you can discover the hidden blue dream of the country, also known as Alibey Island. Staying at the once predominantly Greek island enables you to experience a mixture of culture, as some islanders still speak Greek. You can taste the fine foods of Turkish cuisine in the friendly environment of cozy restaurants, filled with the warmth of the smiling faces of both locals and tourists. Streets covered with colorful flowers and typical island houses will help visitors escape the hustle and bustle of daily life.

Nested between the crystal clear waters, spectacular, protected mountain forests "and olive groves of the Aegean and Mediterranean Seas, Akbük Bay, which means "White Bay," is accepted as a specially protected environment area, and building is not allowed here. That is why this bay may be the most untouched bay in Turkey. Historically, Akbük Bay was a small fishing village that was off the beaten track for fish lovers. Although more and more visitors are discovering it every day, what makes this bay special is that it has the lowest humidity and highest oxygen ratio in the entire country. Recognized internationally with a blue flag, the harbor in the bay is renowned for its serenity and peaceful atmosphere.
The bay boasts brilliant white sands like no other with its sea that does not deepen quickly, no matter how long and far you swim. There are camping sites and hostels in Akbük Bay for those who want to spend a night
in this mesmerizing bay.

Nested among cedar trees and the Köprü River, the canyon embraces adventurous spirits looking to explore an unsoiled place in Antalya, one of the most touristic destinations in Turkey. After passing through the mountains where green streams flow and virgin forests grow, Köprülü Canyon shows all of its beauty to its visitors. Resembling another natural wonder of Turkey, the Fairy Chimneys, Köprülü Canyon one-ups this thanks to its river. You can feel the adrenaline from river rafting and enjoy getting wet through the crystal clear spring water and rapid waves of all sizes. When you arrive at the canyon for camping, you will be mesmerized with the spectacular view of Taurus Mountain and the surrounding national park.
Marked as the longest canyon in Turkey at 14 kilometers, Köprülü Canyon's walls are as high as 100 meters.

What makes the canyon fascinating is its historical sites dating back to the ancient times. There are still remains of a theater and temples of Zeus and Artemis in the canyon region. Two bridges called Oluk Bridge and Bugrum Bridge still stand as a testament to the engineering wonder of ancient times. The canyon is nearly 92 kilometers away from Antalya's city center, and the best way to reach the canyon is by car.

Selİmİye, a picturesque harbor in Turkey's western city of Muğla, casts a spell on its visitors. Even though it is nearly 30 minutes away from Marmaris, which is one of the most renowned tourist cities in the country, Selimiye is a small tourist resort strung out along a stunning bay. Most of its visitors arrive by yacht or boat to Selimeye, which features mesmerizing turquoise waters that charm visitors. Selimiye has a strong local reputation for traditional wooden boat building, so on the road into town, you will pass several boat yards where you will see massive wooden gullets being built in time-honored traditional methods. This little harbor may also be the perfect spot for those who want to taste some of the best seafood on the Aegean coast. It has little restaurants where fishermen serve fish that they caught that day; their service is simple, but delicious!
There are also little hostels serving as bed and breakfasts, and boutique hotels where you can
spend a night in tranquility.

Separated from the renowned Turkish city of Olympos only by a rock, Çıralı is one of the most beautiful secluded beaches along Turkey's Mediterranean coast, and shares Olympos's Hellenic ruins and historical site. What makes Çıralı famous is its flaming rocks (yanartaş), which are natural flames that constantly burn, located on a mountainside at the north end of Çıralı village. These eternal flames have been burning methane gas from vents on the rocky slopes for thousands of years. Known as a landmark for ancient mariners passing through the Mediterranean Sea, the flames around Çıralı have died down a bit since antiquity. Even though it is less remarkable than what the ancients saw, however, it is still an incredible natural wonder that attracts visitors. During your stay at this natural wonder, do not forget to look up at the sky while lying on the beach. Just like in the movies, you will be enchanted by the Milky Way gliding right above you, but with a little difference - you get to see it directly for yourself!
Last Update: Aug 07, 2014 1:44 am
RELATED TOPICS