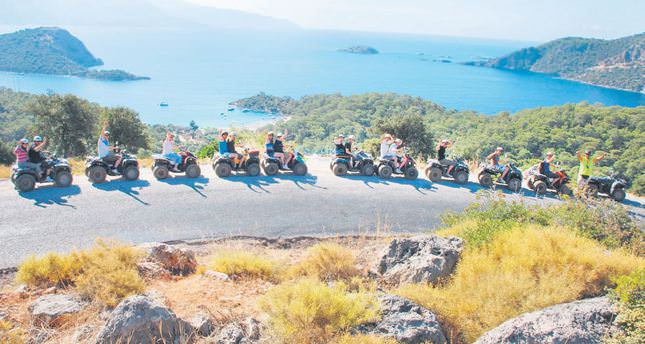 Referred to as 'the Ghost village' on the Aegean Coast, Kayaköy in Fethiye is a heavenly escape for expats and those after a memorable holiday. The archeological site has just as many thrilling things to do as to see

The deserted village of Karaköy, located in the Fethiye peninsula in the southwest, has been transformed from a ghost village into a burgeoning tourism center thanks to expats and local tourists trying to find a picturesque retreat. Once known as Levissi, Kayaköy is a deserted village tucked away in a valley set against the Taurus Mountains of the Fethiye Peninsula. Regularly referred to as "Ghost Village,"

Kayaköy has become a popular retreat from Fethiye's bustling summer resorts, and its new inhabitants, including a significant expat population, are breathing life into this picturesque village, which is becoming one of the most visited spots along Turkey's Aegean Coast. Situated in the Kaya Valley of the Fethiye peninsula 120 meters above sea level, Kayaköy is a beautiful, yet haunting spot for many as it sheds light on a sensitive era of Turkey's history.

This historical village, which was founded in the 18th century on the site of the Lycian town of Karmylassos, was once inhabited and later deserted by Turkey's Greek population. Now, it is a deserted village with hundreds of Greek-style homes and churches covering a small mountainside, which have largely been preserved giving visitors a sense of time standing still, and a perspective into what life was like a century ago.

Kayaköy is becoming a favorite destination for many seeking a tranquil retreat into the natural surroundings of the ancient town's ruins, which happen to be situated in one of the most beautiful spots in Turkey. It is so beautiful, in fact, that actor and director Russell Crowe shot parts of his directorial debuting film "The Water Diviner" in Kayaköy this spring. Kayaköy is also presumed to be the setting for the book "Birds Without Wings," penned by Louis de Bernières,' the author of "Captain Corelli's Mandolin." Kayaköy became a protected archaeological site in 1988, and has also been adopted by UNESCO as a World Friendship and Peace Village.

In the 19th century, Kayaköy was a thriving town, where Turkey's Muslims and Greekheritage Christian Orthodox lived together in harmony. Following the loss of World War I, the end of the Ottoman Empire and the Greco-Turkish War, which was the western front of the Turkish War of Independence, all Greek-heritage Christians were deported while all Muslim Turks were expelled from Greece in a massive mutual population exchange that took place in 1923.

For Kayaköy, this meant the desertion of hundreds of homes, schools and dozens of churches. Any residents that remained deserted after the Fethiye earthquake of 1957, and the village has remained somewhat intact, sans roofs, doors and windows since then. Now a historical site, there is a minimal charge to visit the ruins, which include two well-preserved churches, which still have frescoes, mosaics and even an ossuary, with the remaining bones left behind when the Greeks took the skulls of their ancestors with them.

Over the past decade especially, the village of Kayaköy is experiencing a revival, as Turks and expats alike are breathing life into this "Ghost Village" by making it their home, and by offering ever-increasing numbers of visitors a wide variety of unique and relaxing restaurants and accommodations set in the surrounding nature. Poseidon, one of the village's oldest restaurants, has wonderful views from seating shaded by vines, and a menu of Turkish, Greek and Cretan specialties. They have live music at night, and a shop next door that sells colorful clothes and jewelry.

Blue Butterfly, a laid-back, rustic bohemian restaurant with tables tucked into a terraced landscape, is a favorite with expats, and owned by a
Turkish-Moroccan couple. Fairy lights and candles make the place mystical at night, and their specialty is lamb tagine.

Levissi Garden is housed in a 400-year-old stone building and cellar, and prepares Mediterranean dishes such as Kleftiko, lamb marinated in wine that is slow-cooked for hours.

Totem is a unique colorful chill-out garden and pool that offers a menu of café fare, and sells jewelry and crafts. Dutch artist Isabelle Cordes has also opened an art café named Isabelle in her restored stone house that serves up snacks, coffees and drinks.

Istanbul Restaurant dishes up traditional grills and meze, and has an in-house saxophone player and singer who performs, making it one of the liveliest spots in town. Like many other restaurants in the village, they offer pickup and delivery services for those not staying in Kayaköy. Sarnıç, yet another tranquil garden eating experience, also has an exhibition of artifacts from Kayaköy's history.

Jazibe is the perfect place for brunch with live music on Sundays overlooking the mountains. Izela is an elegant restaurant housed in a beautiful stone building on the lush grounds of Günay's Garden, which offers accommodations in garden villas. Villa Rhapsody is a peaceful hotel and restaurant on grassy grounds with a sparkling pool owned by a Dutch expat and her Turkish husband.

Muzzy's Place is another poolside option with a relaxed atmosphere, expats on staff and a vine-covered restaurant serving up Turkish and English classics. Yeldeğirmeni Bungalow offers poolside accommodations in log cabins, and has a collection of exotic birds as well as offers horseback riding.

Located a short drive along Kaya Caddesi is the Kaya Village Arts Camp, which offers a wide variety of workshops such as on photography, painting, carpet weaving, batik and Ebru, just to name a few, and has camping, tree house-like platforms for accommodation.

There are a number of alternative ways to enjoy Kayaköy such as visiting on a quad bike or jeep safari, as well as options to take camel treks and horseback riding tours offered by Intersky.

Expat-owned eye4cycling.com also offers bike tours including Kayaköy as a stop. Expats Jane Akatay and Dean Livesley have prepared "A Guide to Kayaköy," which includes an in-depth history of the village, and a series of walks. Kayaköy is also an important stop on the Lycian way, and has an 8km-long cobbled medieval forest path, which winds into Fethiye.
Last Update: Aug 14, 2014 10:58 am
RELATED TOPICS