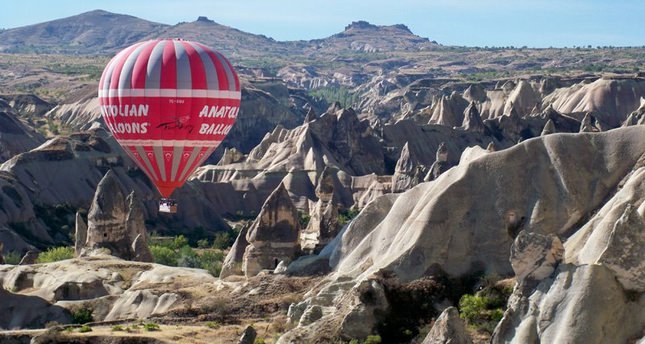 Before the summer leaves us, it is time for you to pedal around Turkey. With its Western and Eastern blend, blue seas and historical remains, Turkey offers bikers and cyclists amazing paths to traverse

Nested between the remnants of civilizations that left their marks on history, the sunshine and vivid blue waters of the Mediterranean and Aegean coasts and eastern tradition, Turkey is a fascinating destination to be discovered by tourists. As a remarkable blend of East and West, Turkey offers different routes for mountain biking and road cycling.

While biking culture is gaining popularity among Turkish citizens, most of the biking-addicted tourists have been rushing to discovering hidden gems on a Turkish cycling route.

Considering its historical remnants, many tourists are coming to Turkey to explore the countless ancient ruins that hide in these lands as proof of Turkey's diverse and storied history and the influence of the Roman, Byzantine and Ottoman empires. In addition to the historical remnants, the Aegean and Mediterranean coasts are tempting options for cycling in Turkey. Imagine that you are pedaling on a road accompanied by endless turquoise waters; that is what you can find on your coastal biking route in Turkey!

Even though road conditions in Turkey are continuously developing, you must ride defensively while you are on a road cycling tour. Most Turkish highways are rough, crushed-stone asphalt, and it may not be quite suitable for cycling; if you are experienced enough, however, it is tolerable. While cycling on the highway, you should always be mindful of the speed and remain attentive. Developing highways provide an opportunity for cyclists to use older roads, while drivers mostly prefer the newer ones.

Biking is popular among tourists in Turkey because bike tours allow tourists and bikers to easily access historic ruins and hidden gems. Tours in Turkey's inner landscapes, including rivers and pine forests, provide a wonderful opportunity to relax riders with their greenery and picturesque scenery. Bikers can also stop at historic villages during their tours as part of the Village-to-Village Bike Tours. What the Aegean and Mediterranean coasts offer is a gorgeous ride next to the brilliant blue sea and the ability to swim in the refreshing waters, enjoy local Turkish cuisine and watch the sun sink into the sea. Dotted along the path of your journey are boutique hotels, both in larger towns and smaller villages, in which you can spend the night. Rest assured that Turkish nationals would embrace you and show you the hospitality that Turkey is famous for. There are certain companies offering different tours across Turkey, so you can choose one of them to enjoy your cycling and mountain biking experience in the country.

Do not forget that an enjoyment of remote, beautiful, hidden gems in Anatolia does not come without some physical effort and determination. So, be ready, and never give up!

Central Anatolia's historical region of Cappadocia is an amazing destination offering breathtaking experiences with its ancient and natural treasures. Cappadocia can be described as a trail biking paradise with its volcanic landscape offering challenging, slick rock with lush, green tracks and caves, tunnels and canyons waiting to be explored. This magical region, with its historical remains, which stand as the most renowned wonders of nature from ancient times, invite you to ride to the core of Anatolia. Through wind and melting snow, the region has been carved out of volcanic rock over centuries and displays amazing colors and shapes unique to Cappadocia, such as the fairy chimneys (also known as hoodoos). The tour offers remote wilderness biking, but also technical trail-focused roots at the same time. This tour is purely designed around the best biking trails the region has to offer. When you ride in Cappadocia, you will witness one of the most fascinating trail biking experiences of your life, not to mention traditional Turkish culture as well.

Istanbul, an amazing metropolis situated between Asia and Europe, offers nice options to discover this big city by bike. Even though biking in Istanbul is considered difficult for certain reasons, such as the air pollution, traffic rush and hilly districts, the city offers bikers the ability to see magnificent historical remnants, the blue Marmara Sea and the Bosporus at the same time. Istanbul is already an adventure waiting to be experienced, but if you are pedaling, it offers twice the adventure! There are certain paths that you may prefer while on your biking tour. You can use paths on the European side, such as from Beşiktaş to the Fatih Sultan Mehmet Bridge. It takes nearly two hours by biking slowly, and you can enjoy the view during your ride.

On the Asian side, there is less traffic, which is why biking on the Asian side can be a better option if you are looking for some serenity. You may enjoy biking along the Moda seaside in Kadıköy on the Asian side. For another path, you can take a boat and go to the Princes' Islands. The Islands are actually a chain of nine small islands that were used as places of exile during the Byzantine era. Described as a magnificent garden on the Marmara Sea, Büyükada, meaning "Grand Island" in Turkish, is a perfect spot for enjoying both island culture and biking at the same time. The island is also covered with entertaining facilities to keep visitors occupied, not to mention, it is famous for having no cars, no traffic and no honking horns, only horse carriages, bicycles and people getting around on foot. So, the island can be one of your best options for biking in Istanbul considering the ambiance, ease of reaching from Istanbul and traffic-free roads. When you arrive on the island, you can rent a bike from one of the shopkeepers on the streets and begin your biking journey or just bring your own on one of the ferries.

For coastal biking, you have three options in Turkey. One of them is the Black Sea coast, which has very narrow and hilly roads requiring more physical effort, but also amazing natural wonders that it offers including some of the best and coolest tones of green. As a warmer path, you may prefer the Aegean coastline. There are less travelled and older roads on the Aegean coast that connect mountainous olive groves with meandering, relatively flat seaside areas and exquisite coastal peninsulas. You should also keep in mind that roads on the Aegean coast can be hilly at times, and even if you are very experienced at cycling, you must stay focused. But, it is worth mentioning that you will find perfect coastal scenery that will keep you enthralled. As the last coastal option for biking, you can pedal along the Mediterranean coast of Turkey. Having many facets, Turkey's Mediterranean coastline offers you a scene of turquoise waters and small villages. The coastline also has many historic remnants in its villages as well, and it is a must to stop and discover those ruins. With its hilly roads, vivid blue sea, small villages and tourist destinations, the Mediterranean coast is an enchanting area to discover.
Last Update: Aug 16, 2014 2:10 am
RELATED TOPICS