Watch the stars blanket the night sky in Turkey 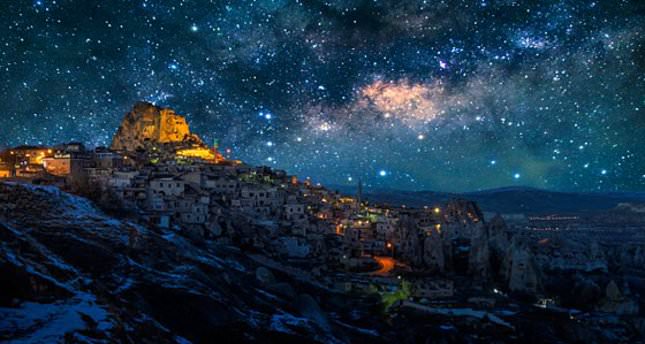 With a dizzying array of stars and constellations blanketing the night skies, Turkey, with its light pollution-free locations and clear skies, offers you the serenity of stargazing

We often miss things around us, especially when we are too busy to pay attention. In our gloriously modern world, each of us has things to do. We work in the same place everyday. We go to the same restaurants to have lunch. We head to our homes using the closest route instead of discovering new ones.

Just admit it: The modern world is killing us a little bit everyday because it puts a great distance between the natural environment and ourselves. During the day, how many of us look up to see the clear blue sky that graces Turkey, especially during the summer? How many times do we watch birds exploring this giant world on their own or create shapes out of the clouds like we did as kids? In truth, we often forget the beauty of this world while chasing other things throughout our short lives.

The modern world also distances us further from something that we always wish for: the endless desire to explore the entire world, stepby- step. It is definitely easier now than in the past. We have airplanes, giant cruise ships, never- ending highways and fast trains. But, there is still something that has remained unsolved since ancient times. Despite all of the technology and the luxury of modernity, there is still something that piques our curiosity: space. It is the only unimpeachable challenge, the "final frontier." It is the only unconquerable destination for today's hardcore travelers who have used all the means of transport in the modern world. With its unfathomable vastness and fascinating views, space alone is spared from the influx of tourists (though, not for long).

Stargazing has been accepted as a new, breaking form of tourism - traveling not for the sun, sand or beach, but for the sky. Described as "dark sky tourism," Turkey offers many places free from light pollution to feel the magic of a dizzying array of stars and constellations blanketing the night skies. This new fascination gets you away from nightclubs and crowded beaches and takes you to the secluded beaches and mountainsides of Turkey. When stargazing in Turkey, bring some water, blankets, chairs or mats with you. You may also want to take a flashlight just in case and of course, a telescope if you have one. After all, this unconquered vastness has much to offer us including the serenity of stargazing when you find a place free of light pollution. In this article, we review some of the great spots to gaze at the Milky Way, watch shooting stars, see satellites zipping by and stare at the brilliant, bright moon shining over the seas to discover
the glory of space.

Olympos in the southern city of Antalya

Described as an escape from the bustle of Antalya's city center, Olympos has its own entertainment amid every shade of green and turquoise. Even though this little town is remarkable at every hour of the day, my favorite time of day to visit the beach is at night because among all the activities that you can do in Olympos, stargazing is the one that tops the list. Be sure to arrive at the beach gate before 9:00 p.m. to ensure access. At this hour, there is no light or crowds, just trees, Hellenic ruins and nature waiting to be discovered on the way to the beach. As soon as you enter the gate leading you to the beach, look up at the sky.

You will be enchanted by the Milky Way gliding right above you, just like in the movies. Moonlight may accompany you on the way to the beach, but if there is none, you must take a flashlight with you while walking to the beach because the road is quite rocky. If you are at the beach at the right time, you can experience the combination of the Milky Way and the biggest full moon you will ever see.

Cappadocia in the Central Anatolia

The magical region of Cappadocia in the Anatolian province of Nevşehir, with its historic remains that stand as some of the most renowned ancient natural wonders, invites you to ride to the core of Anatolia. Through wind and melting snow, the region has been carved out of volcanic rock over centuries and displays amazing colors and shapes unique to Cappadocia such as the fairy chimneys (also known as hoodoos). Even though the main attraction in Cappadocia is hot air ballooning to catch the bird's eye view of this magical place, the real travelers know that if you find the correct peak in the clear night, you will witness shooting stars above the beautiful fairy chimneys.

To witness the magic Cappadocia offers to you, you should travel during the fall season, preferably Oct. 8-9. During these days, you can witness nearly 750 shooting stars in an hour. This natural wonder is called Draconids meteor shower, and the most suitable place for you to experience it is Turkey. In general, the sky of Central Anatolia is very clear, that is why you still have the chance to watch night skies even if you miss the October meteor fest.
Last Update: Sep 02, 2014 7:55 pm
RELATED TOPICS