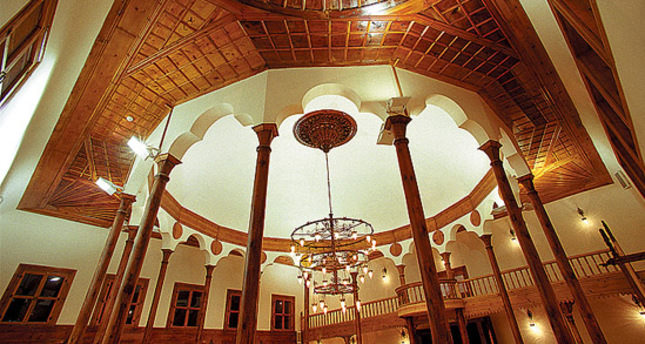 Standing out with its architecture in Tokat, the Mawlavi House Museum,which is regarded as the most aesthetic Mawlavi house of Anatolia, was visited by 21,000 local and foreign tourists in the first eight months of the year.

Manager of the Mawlawi House Museum, Ekrem Anaç, gave information to Anadolu Agency about the history and importance of the House. Anaç said the Mawlavi house was built by Sultan Abdülmecid I in 1850 and presented to the Mawlavis in Tokat. He continued, "Tokat Mawlavi House is the most aesthetic Mawlavi house in Anatolia as it is wooden. There are bigger and more magnificent Mawlavi houses in Turkey but they are no match to the one in Tokat." Tokat Mawlavi House is a double-storey building decorated with baroque motifs. It has wooden colonnades and a balcony which surrounds the front of the building.

The Mawlavi house was used as a "dervish lodge" until the law that closed lodges and zawiyas was passed. Later on, it was turned into a prison for women, a Quran course and a military police station.The building was finally restored by General Directorate for Foundations between 2000 and 2004 . Although the Museum attracts local tourists as well as foreigners, Anaç said that Tokat is not very fortunate in terms of foreign tourist visits since it is not on the main touristic route.

In 2007, the Mawlavi House Museum welcomed 128,340 local and 910 foreign tourists. In the first eight months of 2014, the number of local tourist was 20,725 as opposed to 193 foreign tourists. Anaç stated that Mawlavi House Museum and other museums in Tokat are free of charge. He pointed out that there are a lot of historical buildings and artifacts in Tokat, adding, "Tokat is an important city regarding Anatolian Turkish architecture.We have important artifacts belonging to almost every century.People can easily observe the historical development of architecture.
Tokat is a laboratory, so to speak, of Turkish architecture which everybody should see."Carpet, rug, book, plaque and hand written Quran are also on display at the Mawlavi House Museum.