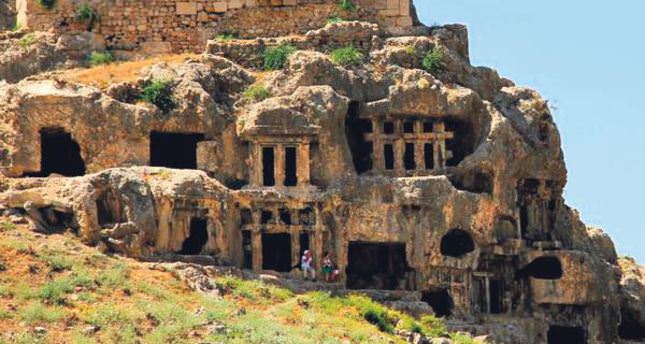 The ancient city of Tlos, one of the most important settlements of the Lycian civilization in the Seydikemer district of Mugla, has been an uninterrupted settlement for 11,000 years

Excavations of Tlos' acropolis, theatre, stadium, public bath, basilica and Temple of Cronus at the ancient site have been given the highest priority. Tlos is listed on the United Nations Educational, Scientific and Cultural Organization's (UNESCO) Temporary World Heritage List and since 2005, important findings that shed light into the Lycian civilization have been unearthed at the site along with evidence that indicates modern life in the region dating back 11,000 years. Akdeniz University Professor Taner Korkut, in his statement to Anadolu Agency (AA), said this year's excavations, which started on July 1, finished on Sept. 5. He noted that apart from 25 workers, local and foreign university members and students participated in the excavations. He stated they discovered important findings that shed light into the history of the region and the ancient city as well as the history of Anatolia. He said they determined that settlement in the region began 11,000 years ago, adding, "We believe people in this region founded a modern culture." He further noted that people currently living in the region might be relatives of residents of Tlos' ancient city. "I believe we will make new discoveries that will support our arguments.

The remains that we unearthed in Tlos, Girmeler Mound and Tavabası Cave indicate that modern life in the region began 11,000 years ago," said Korkut. He stated there are documents about the city dating to 500 B.C. onwards and the Lycian civilization. He said there is no document that exists from before 500 B.C, noting, "We do not know what language they spoke or what they wrote before 500 B.C." Korkut continued, "The only thing we know is the settlement in this region was uninterrupted.

Hence, the nation we named Lycia is the same as the nation that lived here before them. People came here long time ago and developed a modern civilization, founding their own culture." Korkut pointed out that the ancient city of Tlos has been on UNESCO'S Temporary World Heritage list since 2009 along with other ancient Lycian sites, and noted that only Letoon and Xanthos, other ancient Lycian cities, are able to enter the permanent list thanks to French academics. He also said that they are working hard for Tlos to enter the permanent list, and they need long-term programs to preserve the ancient city. He concluded, "Although the criteria for the permanent list are hard to meet, we want Tlos to enter that list. However, even if it will not be a part of the permanent list, this region, this city and the whole geography needs to be protected. We are working hand-in-hand with Turkey's Ministry of Culture and Tourism to preserve the city."