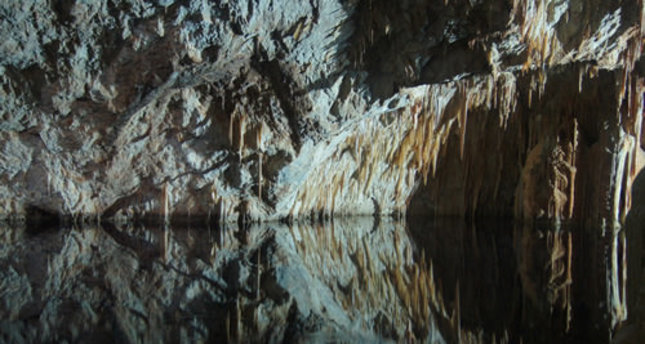 Located in the Aydıncık district of Mersin, Gilindire Cave, currently protected by Turkey's Ministry of Forestry and Water Affairs, takes visitors on a journey through the Ice Age

The fossil cave whose entrance is situated on a slope at 45 meters above the shore has stalactites, stalagmites and column formations as well as rare features such as cave pearls, travertine and showerhead stalactites. ﻿According to information collected by an Anadolu Agency (AA) reporter, Gilindire cave was accidentally found by a shepherd in 1999. ﻿Regarded as unique by scientists, Gilindire Cave is situated over 265 acres - it is 555 meters wide and 46 meters deep. The main gallery, which extends 450 meters horizontally, leads to a lake at the bottom of the cave.

According to studies, Gilindire was formed during the climate change in the Quaternary Period, the last period of the Cenozoic Era. As the level of the Mediterranean Sea increased by 70 meters, the bottom of the cave remained under water. Due to hydrological changes, the stalactites and stalagmites in the cave remained under water and survived to this age without being affected from atmospheric changes. It was determined that the underwater geologic formations formed before the global climate change event, and hence they contain hydrologic and atmospheric data from the previous ice age. The cave is the only ice age data source in Eastern Europe, the Middle East, Balkans and Eastern Mediterranean.

The lake in Gilindire Cave is 47 meters below sea level. The water at the surface of the lake to 12 meters down is hard and mineral-rich, while the deeper water is salty. Since there is no current in the lake, it is a great reflector, so locals call it Aynalıgöl (Mirror Lake).

Declared a natural monument by the Ministry of Forestry and Water Affairs last year due to its "one-of-a-kind" features, Gilindire Cave opened to visitors two months ago. Visitors go into the cave, which is located in one of the unique bays on the Mediterranean by walking down the stairs to astonishing geologic sights. Seeing stalactites, stalagmites, columns, cave pearls and travertines, visitors feel as though they are traveling through the Ice Age. Officials in the cave help visitors who cannot see the water in Aynalıgöl because of the reflection. Officials working in the cave show the water with the help of flashlights and warn visitors about the water. Although it has been open for two months, Gilindire Cave has been attracting many tourists.