A must see on the Bosporus: The Istanbul Naval Museum 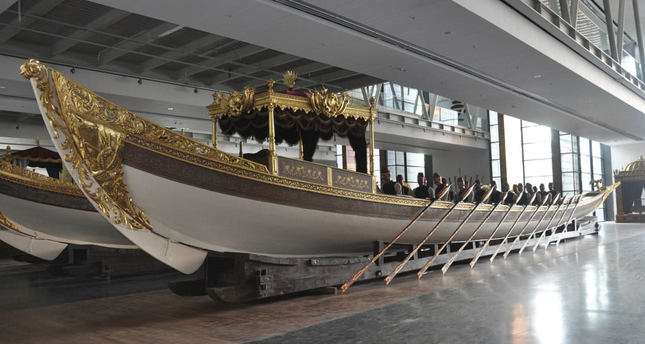 Standing as one of the most prestigious museums in Turkey with its rich, historical collections and decorative architecture, the Istanbul Naval Museum reopened its doors on Oct. 4, 2013, after a six-year renovation

Featuring almost 20,000 works of art, the Naval Museum is situated in Istanbul's Beşiktaş district and is waiting to be explored by researchers and visitors. Some of its featured exhibitions include the galley used by Ottoman Sultan Mehmed IV, the 444-year-old Ottoman flag taken by the Holy League during the Battle of Lepanto and returned to Turkey 51 years ago by the former Pope Paul VI, part of the defensive chain that stretched across the Bosporus that was ordered by Constantine XI to protect the city, the Golden Horn from Ottoman forces and the İnebolu Boat, which carried ammunition over the Black Sea at the time of the Turkish War of Independence.

Former Major Süleyman Nutki played a pioneering role in the foundation of the museum. It was established in 1961 at its former location in Dolmabahçe Palace. Six years later, the museum was moved to its current location. Since its reopening, almost 190,000 people, among whom are 86,000 students and 12,000 foreign tourists, have visited the museum.

Museologist Ece Irmak spoke to an Anadolu Agency reporter and said that the Istanbul Naval Museum deserves more attention thanks to its newly renovated building designed with contemporary museology standards. Spread across 10,000 square meters, an additional new building next to the museum will be ready this year and a passage will be built to connect the two buildings. Irmak said the museum has a multi-purpose congress center with a seating capacity for 170 people, two rentable art galleries, one cafe, workshop space for children and two lounges.

At the entrance, there are sculptures featuring the important names of Turkish naval history. The 40-meter-long historic galley is one of the first pieces that draw in the visitors. Irmak said the galley is the only remaining example of its kind. It occupies the largest place in the museum and looks as if it was going to set off on the waters of the Bosporus with its 144 sailor mannequins. The floor where the galley rests also features intricately embellished imperial boats used by sultans, members of the empire and senior statesmen. The boats used by Mustafa Kemal Atatürk during his presidency are on display on the same floor as well. Paintings depicting Istanbul, Ottoman fleets and Turkish naval history are among the other attractive works on the floor.

The museum's other facade facing the Bosporus is mainly covered with glass. Indeed, the Bosporus looks like a painting from there. Visitors reach the upper floor through a corridor whose walls are decorated with miniature ships and paintings taken from the prestigious collections of Turkish naval repertories. Visitors can also see a number of other interesting objects such as the Ottoman flag mentioned above. The Ottoman navy was defeated in the Battle of Lepanto and the Holy League took the banner. The flag was kept at the Vatican until Pope Paul VI presented it to Turkey in 1964. The 5-meter-long silk flag was used by Grand Admiral Müezzinzade Ali Pasha during the battle on Oct. 7, 1571. The flag was decorated with Quranic verses from Surat al-Fath (The Victory), the testament of faith and a zulfiqar.

A boat, which was added to the museum collection in 2004, draws attention with its simple design. Visitors can read the following line on it, "Milli mücadele zaferi amillerinden Gazi İnebolu" (Veteran İnebolu, a figure from the victory of the Turkish War of Independence). The İnebolu Boat secretly carried ammunition to Ankara over the Black Sea and the transfer route was described as the "road of independence." The boat was found in the district of İnebolu in 1992, and in 2004, the museum purchased the boat from the district municipality.

The museum's ground floor is allocated to small- and large-scale art works associated with Turkish naval history from rifles, uniforms, pieces of ships, travel journals, compasses, furniture, astrolabes and pieces of the harbor chain, which draws particular attention. The defensive chain was used to prevent Ottoman ships from entering the Golden Horn and forced Mehmed the Conqueror to order his forces to carry the ships over land. The museum's lesser-known section is "Deniz Müzesi Komutanlığı Deniz Tarihi Arşivi" (The Navy History Archive of the Turkish Commandership of the Naval Museum). The archive is placed in a separate building a few hundred meters away from the museum. Expert Mehmet Korkmaz said the archive is a rich reference resource for those who want to explore the history of the Ottoman navy. The archive features 7,000 works including 21,000 books, 716 maps, 858 books of maps and 242 manuscripts along with over 10,000 photos depicting ships, harbors, schools, sailors, shipyards and sailing exercises. Korkmaz said the preliminary classification of a collection of one million documents belonged to the Ottoman navy has been completed and the documents will be transferred to a digital platform soon. The archive's oldest document is an account notebook dated between 1670 and 1673. All documents including deck logs, personal information notebooks and registration files about majors, officials and sergeants and are open to researchers.