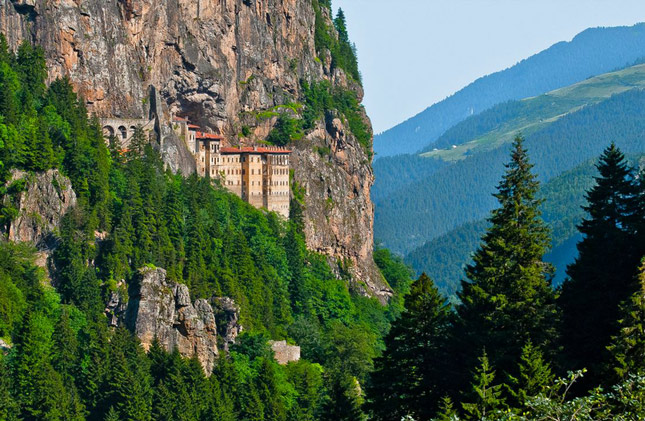 With lush green forests, plateaus, wooden houses, history and delicious dishes, the provinces in Turkey’s Black Sea region is perfect for those who want to experience an unforgettable tour on the coast

Renowned for its natural beauties, wooden houses, high plateaus, Turkey's Black Sea coast, known as Karadeniz in Turkish, is home to verdant colors and promises to fill your lungs with oxygen, take you away from the rush of the metropolis and especially introduce you to the heart of nature.

When you open a tourist brochure, you mainly see Turkey's Aegean and Mediterranean coasts, with the Black Sea unfortunately relegated to the background mostly due to its rainy weather and short window for perfect swimming and sunbathing conditions. Yet, the main time for the Black Sea region is not necessarily the traditional summer holiday. Instead, if what you're looking for are wooden houses in the heart of nature, fresh and refreshing weather and natural beauties away from the crowd, the coast should be on at the top of your list of places to visit in Turkey as it has much to offer.

Imagine that you get in the car in the commercial capital of Istanbul and drive along the entire coast until you reach to the border with Georgia. You see the skyscrapers melting into the waves of the Black Sea and replaced with mountains full of green surrounding you. Little Black Sea towns and tours on the coast are generally the first preference of those who want to refresh in Turkey all year round.

People residing in the Black Sea region are also renowned across Turkey for their friendly faces, sense of humor and high-temperament. The Black Sea is such a vibrantregion that most of the jokes in Turkish are derived from this region. Along with its natural beauties and the stories you will come across, lifestyles that are full of spirit will also draw your attention during your visit.

Listed here are some of the areas and cities along the Black Sea that are must-see places both for local and foreign tourists.

Generally, the first stop on Black Sea tours is Samsun, which is accepted as the beginning of the central Black Sea region. Samsun is one of the luckiest Black Sea cities interms of transportation and road facilities. It is easier to reach than other cities, which have winding roads. Formerly known as Amisos, Samsun was founded circa 750 B.C. by the Milesians, a Hellenic civilization, so it is a province that hides many historical remnants from different civilizations within its borders along with its magnificent landscape. Since it has many historical sites, including prehistoric cave settlements, Neolithic remnants and Ottoman monuments, you will have an opportunity to see history during your visit. The Vezirköprü Oymaağaç ruins, which are believed to be two millennia old, the Chalcolithic ruins along with late Bronze Age, Hittite and Dündartepe ruins and the earliest human settlement, the Tekkeköy Caves, are some of the archeological sites that cannot be passed up. Since legend says that the city was once the home of the Amazons, you can see monuments and references to them there. The city also hosts many museums, both archeological and ethnographic. Since it is where the founder of the Turkish Republic, Mustafa Kemal Atatürk, firstformed his independence entourage, you will also find many monuments and museums dedicated to him as well as the Bandırma steamship that brought Atatürk to Samsun in 1919. Health tourism is also increasing in the city, as the region contains many thermal springs and resorts as well as Eternal Youth Waters and Turkish hamams. Apart from these destinations, waterfalls and the Kızılırmak Delta bolster the city's ecotourism and the Akdağ Winter Sports and Skiing Center offers a perfect location for winter sports and lots of fresh powder.

l Ordu: A clean and long coastline to enjoy the Black Sea

With some of the best sea tourism in the region, Ordu has the cleanest and the longest coastline along the Black Sea, which is why it draws much attention with its natural beaches, hidden coasts and parks. Çaka Beach, Mavi Dünya Beach and Efirli Beach are some of the most popular beaches in the summer, and you can also visit these beaches during other seasons to enjoy the beauty of the Black Sea. With its many wondrous plateaus, it is also the greenest region in Turkey. People living in the region mostly live in wooden houses built on the plateaus during the summer. Imagine how perfect it is being in the center of nature and leaving the entire world behind you. The Çambaşı Plateau is the most famous plateau in the city and is waiting to charm you with its beauty. Since the city is famous for its hazelnuts, you should also visit hazelnut groves. Along with beaches and plateaus, there are also many fortresses and castles in Ordu. With their incomparable natural landscapes, these fortresses are on the must-visit lists of Ordu's many travelers. Bolaman, Ünye, Gölköy and Kurul islands have some of the most visited fortresses and castles in the city. For those who want to see the cityscape from above, Boztepe Hill, which overlooks the city, should be the first choice as you can relax while drinking a cup of tea and sitting on the terraces on the hill.

Giresun province is closer to northeastern Turkey where mountains, plateaus and tones of green are incredibly eye-catching. Giresun is a bigger city than Ordu, yet considering their proximity, they are practically the same city. It is alsobelieved that the first cherry tree taken to Europe was from Giresun. The area is covered with forest vegetation that stretches for almost 2,000 meters from the sea and it is renowned for its plateaus. Kümbet Plateau is the most renowned and preferred one in the city, but it has such a winding road thatwhen the weather is too rainy, it may be hard to access. Its elevation alsoprovides you with the opportunity to fill your lungs with oxygen and enjoy the fresh air and its natural mountain scent that you can't get in a metropolis. Except for festivals held at specified times of the year, its plateaus offer peaceful relaxation and quiet refreshment throughout the year. From time totime, dust clouds travel over the plateaus, leaving behind all the dust they collected from the city center, so do not be surprised if you see a blanket of gray on green grass when you wake up a morning. It is completely natural and very common on the plateaus. While you are touring the villages of the plateaus, you may see many villagers selling herbs believed to cure illnesses and homemade soaps. Giresun is also home to many historical ruins and the Giresun Castle is another attraction that is a must-see for history lovers. The castle is believed to have been built by Pharnaces II of Pontus and used against the Ottoman Empire for defense during invasions by the Trebizond Empire. Moreover, Giresun Island is the only island in the Black Sea. There is one monastery on the island and every year on May 20, the islanders and residents in Giresun gather on the island and throw pebbles into the sea inorder to make their wishes come true.

Trabzon is the largest city in the Black Sea region and is full of natural beauties and friendly people. The areas was once located on the Silk Road and was a melting pot of religions, languages and cultures, so it contains the traces of manycivilizations and is filled with the history of many empires, including theOttoman and Trebizond Empires. There are many monasteries and churches in the city, but the Sümela Monastery is on the top of the must-visit places list for those who intend to visit the city. At an altitude of approximately 1,300 meters and located 40 kilometers from the city center, the monastery is constructed on the ledge of a steep cliff on the slopes of Karadağ (Black Mountain) overlooking the Altındere Valley in the district of Maçka. In recent years, the monastery was reconstructed and opened to worshippers after nearly 90 years so now it has a special place in the heart of its visitors. The monastery has such a unique and charming structure in the forests that it is impossible not to fall in love with history when you see its beauty. When you leave the monastery behind, your next stop in Trabzon should be Hıdırnebi Plateau in Trabzon's Akçaabat district. With its tourism facilities and wooden houses, it is mostly preferred vacation spot in the city. While you are on the plateau, you can enjoy the incredible Black Sea scene and if you are lucky enough, you may come across the plateau's festivals during your stay. The traditional dance of the Black Sea, the horon, and the region's traditional cuisine will contribute to an unforgettable holiday. Uzungöl (long lake) is another popular tourist attraction in Trabzon's Çaykara district with its gorgeous views and surrounding valley. There are boutique wooden hotels andhouses around it, and it is a must for tourists to witness the picturesque view of a lake overlooking a cliff. You should be sure that Trabzon is where youwill find one of the most unique landscapes and traditions in Turkey, from the region's natural beauties to its lifestyles.

Dishes you must try when you visit the Black Sea Region:

l Turkish tea made from leaves that grow in the Black Sea region is a must and will leave you going back for more.

l The region's cuisine is renowned across the country and marked by dishes with "hamsi" (anchovies), including rice with hamsi, bread with hamsi and you can even find baklava made with hamsi, especially in Trabzon.

l "Muhlama," which can be described as resembling cheese fondue, is a delicious dish made from corn meal, homemade butter and traditional cheese.

l People of this region love to add black cabbage to their dishes. It is easy to find since it is a vegetable grown in abundance on the green plateaus. You can taste black cabbage soup and dolma, a special recipe with rolled black cabbage filled with spiced rice.

l Laz börek is a special dessert unique to the region and similar to baklava.