Turkish cittaslows await you to slow down the pace 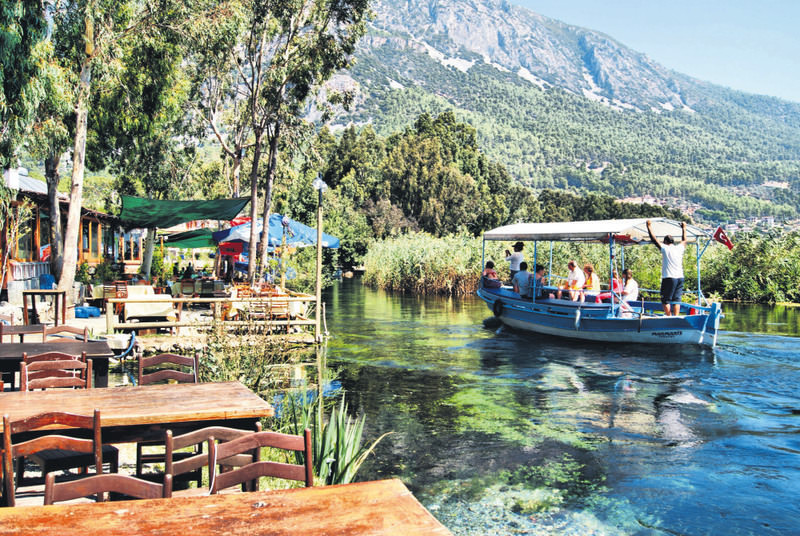 Sometimes we all need a place to escape from the fast pace and busy daily life of today's modern world. Turkey offers you a chance to relax in a serene atmosphere with its towns included in the ‘cittaslow' movement

As cities around the world push us to live at an ever faster pace, often causing us to disregard the beauties hidden in nature, the spreading "cittaslow" movement aims to improve quality of life by slowing down daily life, especially in cities.

Established in Italy in 1999, the cittaslow movement aims to improve urban life quality and well-being, counter globalization around the world and protect cultural diversity and the uniqueness of towns and cities while inspiring us to live a healthier life. Turkey, as an important tourist destination with a high tourist influx, has nine towns taking part in this movement. There, you can discover the heart of nature, organic foods, tranquil daily life and many historic traces inherited from civilizations that left their footprints on Anatolia.

At some point in our lives, we all need to get away. If you find yourself looking for a serene experience away from the hustle and bustle of the urban jungle for a week or longer, there are nine towns all around Turkey taking part in the cittaslow movement. Let's explore some of these areas that are sure to leave you refreshed, rejuvenated and more connected to nature.

Akyaka in the Aegean province of Muğla

The Turkish province of Muğla is already a famous destination with many tourist towns having vivid nightlife and large numbers of visitors during the tourist season. But a town called Akyaka is a real hidden gem among all the tourist destinations. On the way to Muğla, many of us pass through this little cittaslow town, but unfortunately, many of us only visit for a couple of hours. Next time, when you get the chance, Akyaka should not be just a stopover, since it is located where the blue sea meets green land and serenity meets humanity. Surrounded by pine trees on the Gulf of Gökova, Akyaka, once small fishing town, is a holiday paradise with its award-winning houses with wooden balconies. Listed as a cittaslow in 2010, Akyaka is where you can find absolute peace with no traffic, no loud music and no noise. This magical town not only features organic foods and serene daily life, but also nature-centric sports and activities such as windsurfing, biking, kitesurfing, sailing, paragliding, rafting, trekking, riding, rock climbing and sea kayaking. Announced as an Environmental Protection Area in 1988, Akyaka is both a perfect holiday spot and a dreamy cittaslow destination situated on Turkey's Aegean coast.

Gökçeada in the Aegean Sea

Known as the largest island in Turkey, Gökçeada is located in the Aegean Sea and renowned for its unspoiled beaches and natural resources. Located between the Gulf of Saros and the Dardanelles Strait, Gökçeada is the westernmost point of Turkey. If you are looking to live the life of an islander in a cittaslow, Gökçeada is a slice of true island life in Turkey with its history, culture and tradition set in a stunning landscape of the sea. The island is also the first cittaslow island in the world, and it is a perfect spot for surfing in the Aegean Sea. Among the destinations on the island, Zeytinliköy is known as the best, with its pristine beaches and natural beauty. The island's Kaleköy is also renowned for its picturesque view. Life in Kaleköy starts in the afternoon and continues until the late hours, as there are many restaurants, bars and cafes located there. With every shade of green, pine forests, olive groves, natural life, organic products and alternative sports, Gökçeada is one of the best cittaslow destinations for those who need to slow down.

Halfeti in the southeastern province of Şanlıurfa

Renowned for its hospitable locals, diverse culture and rich history, the southeastern province of Şanlıurfa is already one of the most attractive destinations in Turkey to visit. When it comes to Halfeti, it can be said that the town enjoys both being a cittaslow town and being located in one of the most eye-catching tourist locations. Sadly, nearly 150 homes from two neighbors of this small farming town on the east bank of the Fırat River have been submerged. Many families lost their homes and relocated to "New Halfeti." Halfeti, one of the oldest districts in the region, has been the home of many civilizations since the town was conquered in 855 B.C. by the Assyrian King Salmanasar III. Then, it passed into the hands of the Greeks and later to the Arabs before the Byzantines reconquered the city and held it until the Ottomans captured it. Witnessing many civilizations throughout its history, the town developed a unique culture and rich historical heritage. Designated as a slow city in 2013, Halfeti is also the first cittaslow in southeastern Turkey. When you are in Halfeti, it is a must for you to taste traditional southeastern foods that have a feel of the neighboring countries in the region. Another tip for you is that, as evidence of Mother Nature's beauty in Halfeti, Turkey's one and only black rose grows there. To experience a slow city life in an eastern culture-filled land, Halfeti is the perfect spot for you.

Seferihisar in the Aegean province of İzmİr

Listed as the first cittaslow of Turkey, Seferihisar in Turkey's Aegean town of İzmir is where history meets the sea. Seferihisar lies away from the big city hustle, surrounded by the Aegean Sea. Within the district, there are ancient cities dating back to the Hellenistic and Roman periods. In the ancient city of Teos, which is known as one of the 12 Ionian settlements dating back to the Archaic Age, there are monuments to the Greek god Dionysus, the Altar, Agora, Odeon and harbor ruins. During your stay in Seferihisar, you can visit those monuments or stroll down to the small port of Sığacık, the most serene atmosphere you can find in Seferihisar. In Sığacık, there is a castle that was built by the Ottomans in 1522 to monitor the naval facilities whose ruins are open to visitors. These historic monuments and ruins are actually what have preserved the Aegean town from development because the archeological sites and military zones around the town are protected areas. Living in this town is like a dream, as the blue waters of the Aegean Sea lap gently in front of you when you wake up, and the relaxing daily village life awaits you for the rest of the day. Imagine starting your day among olive, grape and citrus trees and then feeding yourselves with the most organic products coming from the same village. Turkish delight, jams, tomato paste and many other organic foods in this small fishing village are freshly available to make your cittaslow dreams come true.

Taraklı in the northwestern province of Sakarya

The protector of the Ottoman legacy in northwestern Turkey, Taraklı is off the beaten path for visitors with its old-style wooden houses and narrow streets dating back to the past three centuries. Taraklı was listed as a cittaslow destination in 2011, and has started to attract more tourists since then. However, its beauty has long been known to locals, and it is a favorite destination to visit on weekends. People in Taraklı still live as if the modern world had never arrived in their town. Every place you visit in Taraklı will make you feel as if you were living in old Ottoman times. There are many handmade crafts, wooden combs and healthy organic products in bazaars set up in the town. Taraklı houses, the Yunus Pasha Mosque, therapeutic natural spring waters, Hark Canyon, the Acısu River and the Hamza spring are among the places you should not miss during your stay in Taraklı. For a trip into history, Taraklı is one of the best cittaslow destinations for history lovers.

Yalvaç in the Mediterranean province of Isparta

Located in the Mediterranean city of Isparta, Yalvaç is a cittaslow destination offering history and cultural diversity at the same time. Even though it is located away from the Mediterranean Sea, the town is a very old settlement with historic and cultural diversity. Its museums, ancient ruins and the Hoyran Lake definitely deserve a visit. The town is where the ancient city of Antioch, built by Alexander the Great's General Seleukos, was located. In the ancient city of Antioch, only one kilometer from Yalvaç, there is the historic church of St. Paul, hammams and ancient theaters. There is also a mosque in the town whose construction date is unknown. In Yalvaç, there are many apple orchards where you can grow, buy and sell if you are interested in a long stay in the town. With its friendly locals and villagers, you can both learn about the traditional cuisine in the town and how to make handicrafts, including leather work, metal work and felting. Yalvaç is simply one of the most history- and culture-filled "slow" cities in Turkey, and you will be amazed by the quality of life in the historic city that disregards the rest of the modern world surrounding you.