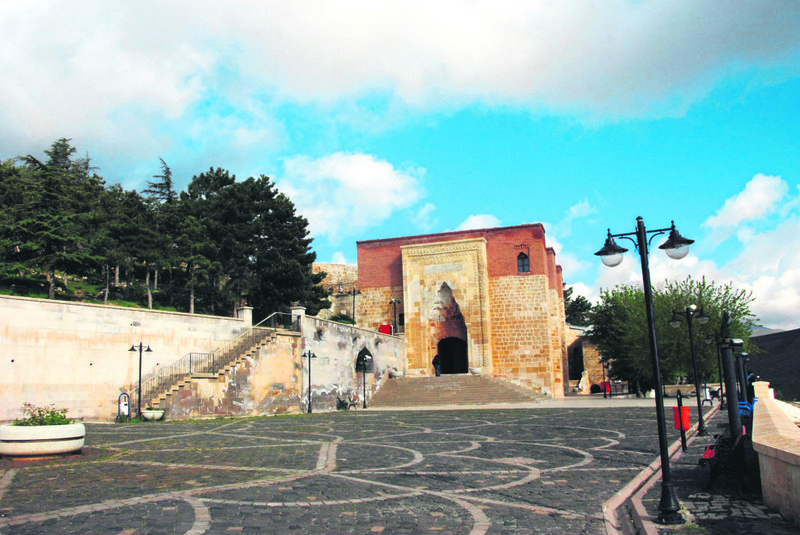 Known as the place where seven young men and their dog are believed to have slept for three centuries during the Roman era while they were escaping from the persecution of the Roman emperor, the Eshab-ı Kehf Külliye has been included in UNESCO's World Heritage Tentative List

The Eshab-ı Kehf Külliye, an Islamic social complex, has been included on the UNESCO World Heritage Tentative List, which stirred hope for the region's tourism. Speaking on the subject, Justice and Development Party (AK Party) Group Deputy Chairman Mahir Ünal said they have been following the process regarding the kulliye for a very long time.

Explaining that they have been intensely working for the promotion of the complex for the last five years, Ünal said that they will continue to work for the complex to be included on UNESCO's permanent World Heritage List.

He said that the Eshab-ı Kehf Külliye located in Kahramanmaraş's Afşin district was previously registered as the cave of the Seven Sleepers of Ephesus mentioned in the Quran. "We moved onto the next phase as the complex was admitted to the UNESCO Tentative World Heritage List. From now on, our aim is to leave this place to future generations as a world heritage site," Ünal said, adding that the Directorate General of Foundations handed over the management of the complex to Afşin Municipality.

Officials plan to convert the area around it into a living center featuring hotels, restaurants and cafes. Moreover, visitors will be able to pray in comfort when they visit. Ünal also said that the Directorate General of Foundations plans to build a hotel either in the Afşin city center or near the region where the complex stands. Stressing that they have been contacting tourism agencies, Ünal said: "The Eshab-ı Kehf Külliye has great potential not only in Turkey, but around the world. We intend to turn the complex into an important hub for faith tourism."

Afşin Municipality Mayor Mehmet Fatih Güven said that the inclusion of the Eshab-ı Kehf Külliye on the UNESCO Tentative World Heritage List will add great value both to the district and Kahramanmaraş.

Saying that local people name their children after the Seven Sleepers of Ephesus, Güven said: "It is possible to frequently come across these names in Afşin."

According to various sources, young people named Yemliha, Mekselina, Mislina, Mernus, Sazenus, Tebernus and the Kefestetayus ran away from the cruelty of Dakyanus as they converted to Christianity and took shelter in a cave with their dog Kitmis, or al-Rakim, during the Roman period. Roman soldiers soon discovered the cave and covered the entrance of the cave to keep the youths in. The seven youngsters are believed to have slept for 300 years. When they finally woke up, they sent one of them to buy some food from the market, however, the real story was revealed once the youngster tried to pay with the money dating back to the reign of Dakyanus. The cave sheltering the seven friends, which has both Christian and Muslim interpretations, is claimed to be in different locations. Sources point out that there are dozens of caves named Eshab-ı Kehf in Asia, Europe and Africa as well as Selçuk, Tarsus and Afşin in Turkey.

Some findings and documents, however, claim that among the 33 caves around the world, the cave in Afşin is the real place. Locals in Afşin who believe the story is true keep this rooted tradition alive by naming their children after the seven friends. The local government and the administration also hold events in the name of the Seven Sleepers and pass this tradition down to the next generations.
Last Update: May 01, 2015 10:49 pm
RELATED TOPICS