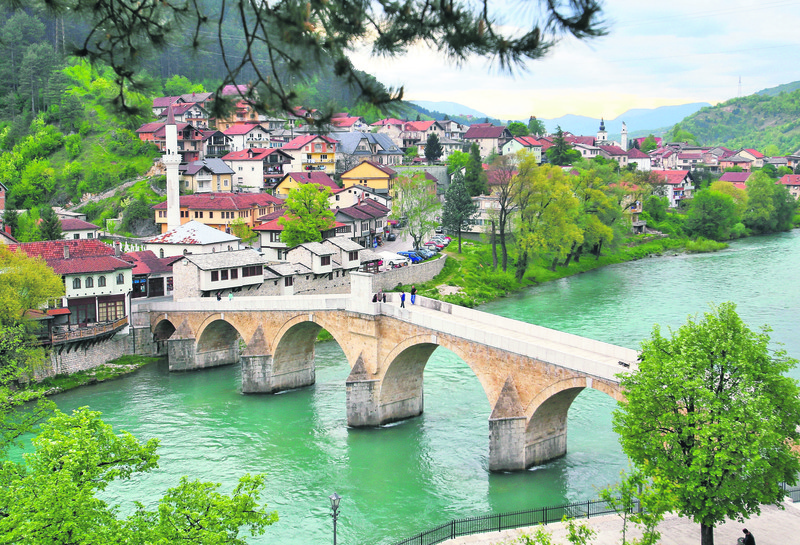 Characterized as heaven on earth for its historical and natural beauties, Bosnia-Herzegovina stands out during spring with its unique beauty

Bosnia-Herzegovina, which was under the rule of the Ottoman Empire for more than four centuries, draws visitors' attention with the mosques, bridges, inns, public baths, libraries and madrasahs dating back to the Ottoman era along with its green forests, picnic areas and rivers. Undoubtedly, Sarajevo is the first place to visit when you step foot in the country. Resembling an open-air museum, Sarajevo is a valley divided into two by the Miljacka River. One of the best preserved places of the city is its heart, Başçarşı. Featuring single-story shops, fountains, jewelers and stone streets, Başçarşı is a miniature version of Istanbul's Grand Bazaar. Also, picnic areas located in the İlica district, which is 10 minutes away from the city center, and green parks are among the other places that tourists should visit in the city. When Sarajevo was under Austro-Hungarian rule, the first tram in Europe began operating in the city. With the newly renovated trams, the visitors are able to tour the city. The Kovaci Martyrs' Cemetery, which is also home to the tomb of Alija Izetbegovic, the first president of Bosnia-Herzegovina, is another must-see place in the city.

The Herzegovina region, which is located in the southern part of the country, impresses people with its historical and natural beauties. Those who plan to pay a visit to the country should not leave before seeing the emerald green Neretva River, stone-built houses in Mostar, Ottoman mosques, mansions and the Mostar Bridge. After visiting Mostar, the Alperenler Lodge in Blagay, which is 15 minutes from the city center, should be your next stop. The lodge that is situated near the source of Buna River also features the tombs of Sarı Saltuk, one of the Anatolia-based religious individuals that had an important effect in the spread of Islam in the Balkans. The city of Konyits, situated between Sarajevo and Mostar, is a good place to take a break. The city is divided into two by the Neretva River and connected by the Konyits Bridge, which is another historical structure built by the Ottomans. Apart from its well-known cities such as Sarajevo, Mostar and Travnik, Bosnia-Herzegovina is a country that has many historical and natural beauties in its northwest and central regions. Vranduk Fortress, which is 15 minutes from the central city of Zenica, takes visitors on a journey through medieval times. Built on a rock during the time of the Kingdom of Bosnia, it had been used for defensive purposes throughout its history. In addition to the fortress, the town of Vranduk is flooded by visitors from all over the country especially during the holidays.
Last Update: May 06, 2015 10:31 pm
RELATED TOPICS