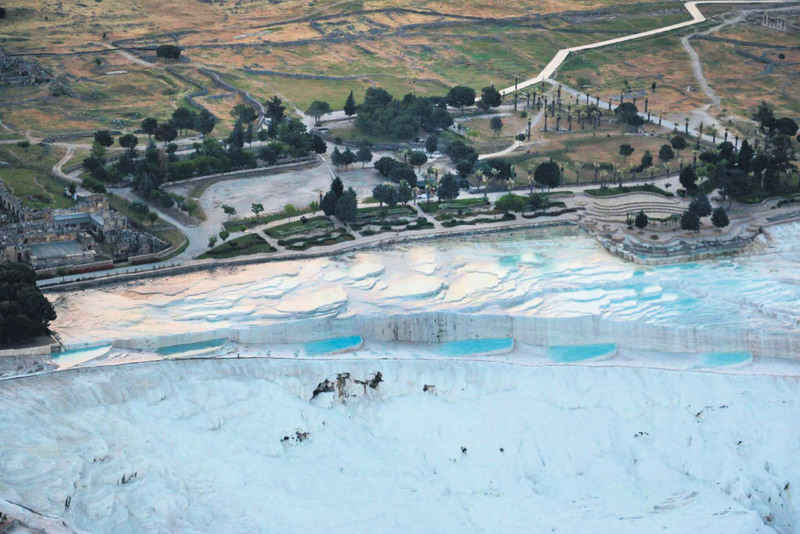 by Anadolu Agency May 21, 2015 12:00 am
Local and foreign tourists are able to experience aerial views of Pamukkale, which is listed on UNESCO's World Heritage List and is regarded as a "white paradise" thanks to the hot-air balloon tours initiated by a Pamukkale-based tourism agency last year.

Tourists who want to see the white paradise from above are picked up from their hotels early in the morning and brought to the Kocaçukur region where balloons lift off. It takes about 30 minutes of work by professionals to prepare the balloons for flight, and small balloons are first sent into the air in order to determine the flight path. After the weather conditions are checked and approved, the hot-air balloon tour begins.

Tourists stay in the air for almost an hour and observe the white travertine, the ancient city of Hierapolis and other regional beauties. Those who fly very early in the morning are able to see the sunrise from the balloon as well.

Deputy manager of the Turkish Aeronautical Association and Gökçen Aviation Balloon, Nevzat Köse, said they have been conducting hot-air balloon tours for a year now, serving 2,175 people between June 1 and Dec. 31, 2014. "Last year, we generated 352,000 euros in revenue. When we compared it to Cappadocia, whose annual revenue from hot-air balloon tourism is 80 million euros, we are just the bottom rung of the ladder," Köse said. He added that Pamukkale has a particular beauty that cannot be seen anywhere else in the world. "The region is a rare tourist attraction where tourists can enjoy paragliding and hang gliding. We want to turn Pamukkale into an aviation center and promote balloon tours," he said, stressing they are also working on offering more kinds of activities. "We can achieve this with the support of the local government," Köse said.

Colombian tourist Claudia Polonia and her daughter Anna Maria said they had the chance to properly see Pamukkale while they were on a balloon tour. "Balloon tours are really nice. It was fascinating to watch the sunrise from it. Looking down on Pamukkale from a balloon is both enjoyable and mad," she said. Argentinian tourist Bernardo Bilderise took a balloon tour for the first time in Pamukkale, and said it was a fantastic experience. Another Colombian tourist, Juan Rojas, said he had tried a balloon tour before, but it was more enjoyable in Pamukkale. Rojas said he wants to visit the region again in the future.
Last Update: May 21, 2015 10:31 pm
RELATED TOPICS