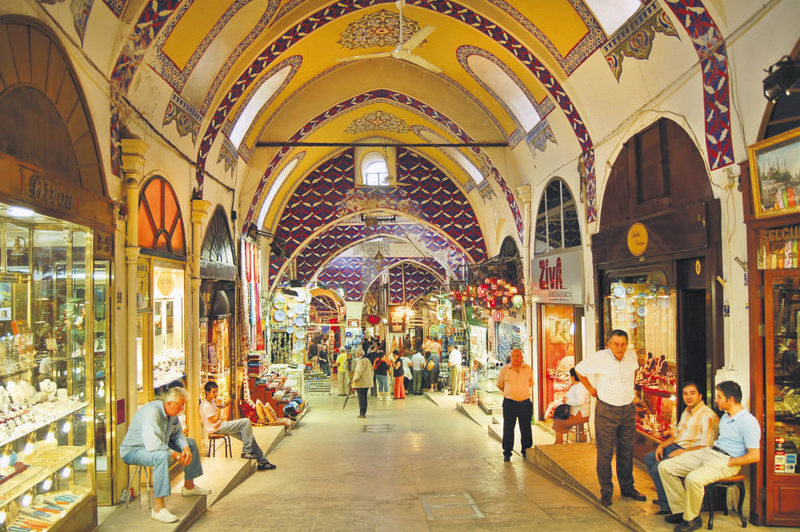 With its deep history and remnants of magnificent civilizations, Istanbul's historic peninsula is one of the most-visited destinations by tourists arriving in Turkey, who come to see the cultural evolution over the past centuries.

Surely Istanbul has many spots waiting to be discovered, but the historic peninsula is the top destination for many tourists. Though millions of foreign tourists are eager to see the peninsula, many Turkish people unfortunately have not had an opportunity, including Istanbulites living in the surrounding area.

While walking in the narrow streets, you will be amazed by the minarets that soar into the sky, along with the many domes, churches, palaces, bazaars and museums. The historic peninsula is like a magical land that captures you immediately, and it seems as if it does not belong to Istanbul, even though it is situated in the heart of the city.

As the center of ancient Istanbul, the historic peninsula has hosted major empires over the course of time, as they ruled their lands from here. This is what makes it such an important destination to be able to understand Istanbul's history and know the people who were living in this magical city.

Legend says that it was first the Delphic Oracle that instructed the Megarions to establish a city on the peninsula. Later, it was also chosen by the Byzantine Empire's Constantine as a location from which to rule. The peninsula is also where Mehmed the Conqueror took the keys of Istanbul and from where many other Ottoman sultans ruled the city. Witnessing the course of history, the peninsula is not only home to many miracles, but also to a profound history.

When you step into the historic peninsula, its charm will captivate you immediately and you may be confused where to go first. As soon as you arrive, the first place you will see is Eminönü Square where the renowned Spice Bazaar is located. In the square, you will see people rushing to the ferries to reach their homes, people feeding the birds and the bazaars located around the square. It is also known that the little restaurant located in the square has the best kebabs, and is called Cag Kebabı, from the eastern city of Erzurum. In the Spice Bazaar, you will see a wide range of spices and many oriental accessories to purchase. So while you are in the Eminönü Square, you should drop by the famous Spice Bazaar.

Among all of them, the one that draws people's attention quickly is the famous Sultanahmet Mosque, or the Blue Mosque, as it is known in English. The mosque was constructed during the rule of Ottoman Sultan Ahmed I exactly opposite the Hagia Sophia. According to claims, Ahmed I ordered the construction of the mosque to show the glory of Islam in the face of Christianity, and asked the mosque's architect, Sedefkar Mehmet Ağa, to build a glorious mosque larger than the Hagia Sophia. But Ağa constructed the Blue Mosque only one hand span taller than the Hagia Sophia, so as to not be disrespectful, and to demonstrate the Islamic value of modesty. Today, the Blue Mosque and its surrounding area are among the most visited places in Istanbul, as many tourists visit to feel the energy that dominates the area there. The mosque is open 24/7 to visitors, but there are some dress codes that you should respect while visiting, just like at other mosques. Women are required to wear headscarves when inside, and if you do not have a headscarf, you can borrow one for free from a booth next to the tourist entrance. You are required to take your shoes off while entering the mosque, and always stay quiet and respect those who are praying.

Opposite the Sultanahmet Mosque, you will see the glorious Hagia Sophia, which was a church, but then turned into a mosque, and today is a museum. It is open between 9 a.m. to 6 p.m., so put it on your list before the visiting time is up. Meaning "divine wisdom" in Greek, the Hagia Sophia has a direct effect on its visitors with its charms and beauty. Built in the fifth century, it is approximately 1,200 years older than the Blue Mosque, and stands as a model for wisdom with its age. According to claims, it is 1,100 years older than St. Paul's Cathedral in London and 700 years older than Westminster Abbey. The Hagia Sophia was constructed in only six years, impressive considering the technology and conditions of the time. Despite its age, the Hagia Sophia is not abandoned and ruined, but a fascinating gem with its huge imperial door that was used by Byzantine emperors, massive domed ceilings and metal lighting frames. Throughout its history, the Hagia Sophia was used as a Christian cathedral for 1,000 years, a Muslim mosque for 500 years after Mehmed the Conqueror took Constantinople from the Byzantine Empire, and a public museum for 80 years. According to the story of how the Hagia Sophia was turned into a mosque from a cathedral, Mehmed the Conqueror changed the direction of the Hagia Sophia to face the Kaaba, a holy place in Islam where Muslims turn to pray. There is a legend that says Mehmed the Conqueror, while leading the community during the first prayers in the converted Hagia Sophia, said "Allahu akbar" (God is great) three times, he then saw the silhouette of the Kaaba in front of him and the direction of the Hagia Sophia changed.

Another magnificent mosque in the historic peninsula is the Süleymaniye Mosque, which is the second-largest mosque and was built by famous Ottoman architect Mimar Sinan in the 16th century during Sultan Süleyman the Magnificent's reign. With its symbols of Ottoman architecture, Sinan himself described the mosque as "semi-skilled work." The mosque is simple compared to the adornments of other Ottoman mosques. The tombs of Süleyman and his wife Hürrem Sultan are located in the mosque and the ceiling of the mosque's mausoleum is adorned with diamonds to create the effect of the stars that can be seen in a clear sky. There are many rumors about the Süleymaniye Mosque, which is exactly what makes this place so special. According to claims, Süleyman could not decide where he wanted his namesake mosque to be built. One night, he saw the Prophet Muhammad in a dream. Muhammad took him to the place where the mosque would be built and depicted all of its details to Süleyman. The next day, Süleyman called Mimar Sinan to talk about the mosque, but when Sinan came, he already knew the details of the mosque. With great curiosity, Süleyman asked: "How could you have known all the details that I would tell you?" Sinan replied: "I was standing right behind you when Muhammad told you about the mosque." It is also said there were four different, huge columns used in the construction of the mosque that came from different countries – one from the ruins of Baalbek in Lebanon, one from Alexandria, one from Redstone that was erected during the Byzantine Empire and one from Topkapı Palace.While visiting these landmarks, you should head towards the Basilica Cistern (also known as the Sunken Palace), which was built in the 6th century. The underground cistern across from the Hagia Sophia is one of the most popular destinations on the peninsula. There are many more underground cisterns in magnificent Istanbul, but this one is the most famous, due to its legends and significant location. In fact, the cistern was built by the Byzantine Emperor Justinian I as a water container to meet the water needs for the city. But today it is the source of many legends. The most popular legend is about Medusa, and you can see two of Medusa's heads in the cistern. They are used as column bases and while one is positioned upside down, the other is tilted to the side. Today, it is still a mystery why one head is sideways and the other is upside down, but it is believed that the builders of the cistern purposely did this with a belief that if both faced the same direction, this might empower the evil forces in Medusa's head.

While you are in the area of Sultanahmet Square, you must visit the Grand Bazaar, which stands as a landmark of history. Now it is used as a huge souvenir shop where you can buy gifts for your loved ones, including many jewelry shops.

Your next destination should be another landmark of the peninsula, Topkapı Palace, which is used as a museum today. Dominating the Bosphorus and the Golden Horn, the palace has a triangular cape. Hosting Ottoman Sultans from the 15th to the 19th century, the palace is surrounded by huge gardens and outer walls. For sure, the palace is one of the richest museums today with its historic monuments and artifacts. Considering its size and all the historic exhibits in the palace, you may want to spend a day to see the entire palace. Bear in mind that the palace is open every day from 9 a.m. to 5 p.m., except for Tuesdays.

Walking miles and miles may tire you out, and you will need somewhere to rest and try some traditional Turkish food. Your first choice should be Sultanahmet Köftecisi, where you can find special Turkish meatballs. If you would like to try something different, you can visit Dostan Manti House. There you can find a special dish in Turkish cuisine, Mantı, which typically consists of a spiced meat mixture, usually lamb or ground beef wrapped in dough, and either boiled or steamed. After eating, you can head to the Çemberlitaş region in the peninsula and visit Çorlulu Ali Pasha Madrasah, which is used as an oriental café serving shisha today. The madrasah was once used as a school in Ottoman times and today you can still soak up the old atmosphere while having a Turkish coffee and shisha.Due to its vast size and many attractions, if you want to truly understand the charm it has and to discover all of the beauties hidden within it, the historic peninsula needs more than in a single day of your time. You will see many historic monuments of all sizes during your tour on the peninsula, so if you do not have enough time to visit each corner, it is better for you to visit the landmarks first and to enjoy special moments in the peninsula's narrow streets.
Last Update: Jun 12, 2015 11:11 pm
RELATED TOPICS