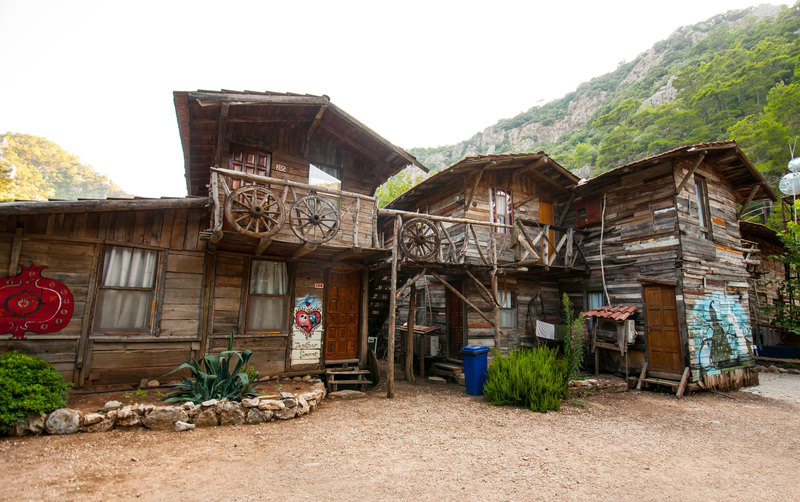 Olympos, a popular tourist attraction in southern Antalya, is an ideal place to experience alternative sports as well as a summer vacation in tree houses

Situated in Antalya's Kumluca district, the 2,200-year-old port city of Olympos attracts travelers seeking a vacation away from the stress and chaos of urban life. Olympos welcomes some 300,000 local and international tourists every year. As the region is located within the Olympos National Park, construction is not permitted in the area. Visitors can stay in bungalows or tree houses. There are 80 tourist facilities in the area and accommodation costs between TL 50 ($17.50) and TL 85. Those who want to stay in caravans or tents can find a place for TL 10. The region also offers people a chance to experience nature and sea sports such as cycling, mountaineering, canoe tours and rafting.

Kadir Kaya, the owner of the region's first accommodation facility, Kadir's Tree Houses, said the decline in number of customers, which is currently the case for five-star hotels, is not an issue in Olympos. He said the hotels in the region are 90-percent full. He said tourists come from 80 different countries including Australia, Cuba, Argentina, China and New Zealand. Turkish tourists usually prefer Olympos in the summer, while international tourists love to visit during spring and fall. Kaya's facility is built from wood and there are no TVs in the rooms, although they feature baths, toilets and air conditioning. "If we put TVs in the rooms, we would then be no different to any other hotel," Kaya said.

He said almost 30,000 tourists come to the region annually to climb the hills or mountains. "This area is one of the most preserved regions in Turkey," he added. Kaya believes that the sustainability of tourism can only be achieved by preserving nature. He stressed that luxurious hotels in the city center of Antalya were built after many trees were destroyed in the area, adding that Olympos is a place where they run hotels without harming the area's natural cycle.

Kaya said the number of tourists will increase once new climbing routes are discovered, as there are 10 million people in Europe interested in mountaineering and if 20 percent of those people visit, the region's tourism will flourish. He also claimed that people coming for mountaineering purposes stay longer and spend more money compared to other tourists, which in turn contributes to the Turkish economy. Claudia Stephens and Sophie Jones who came to Olympos from Australia said that they admire the region. "I previously saw many tree houses and spent my holiday in very natural places but I really like it here," said Jones.
RELATED TOPICS