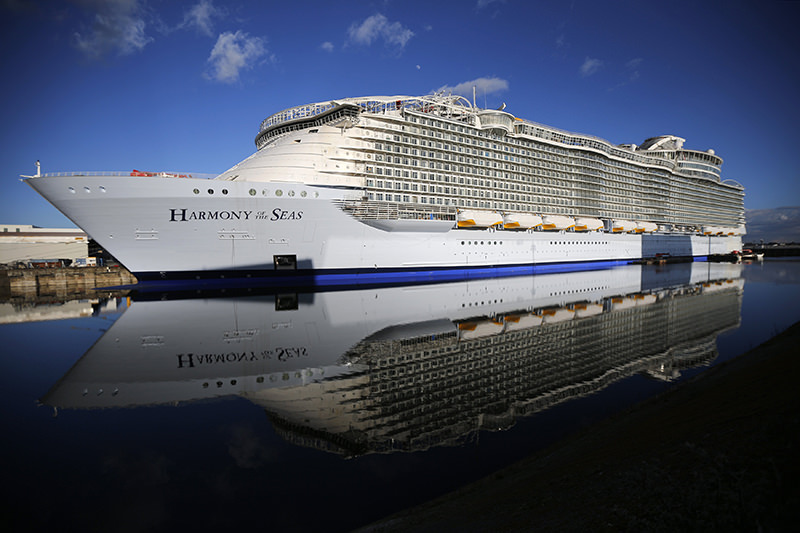 The Harmony of the Seas (Oasis) class ship is pictured at the STX Les Chantiers de l'Atlantique shipyard site in Saint-Nazaire, France, February 18, 2016. (REUTERS Photo)
by Daily Sabah with AFP Mar 10, 2016 12:00 am

Harmony of the Seas, the world's largest luxury cruise ship took to the seas for the first time on Thursday afternoon as it slides into the waters of western France, in the port of Saint Nazaire.

However, the massive ship will have no passengers onboard as this will be its test run before its first official voyage from Southampton in Britain to the Spanish city of Barcelona in May.

Its mini test voyage is expected to end Sunday.

Well, how does the huge ship measure up to its precedents?

Harmony is also a meter wider than the current twin ocean-going monsters of the pleasure cruise world, which are also 362 meters long.

"Allure of the Seas" and "Oasis of the Seas" were the world's previous biggest cruise ships in service, both being 65 meters wide and weighing 225,000 tons each. The trio belongs to Royal Caribbean International cruise lines.

Harmony also has 40 restaurants, many bars, shops, pools and a theatre.

The construction of the Harmony of the Seas began in September 2013 in the shipyards in Saint-Nazaire and was completed only recently.