Much to discover at Turkey's UNESCO World Heritage Sites 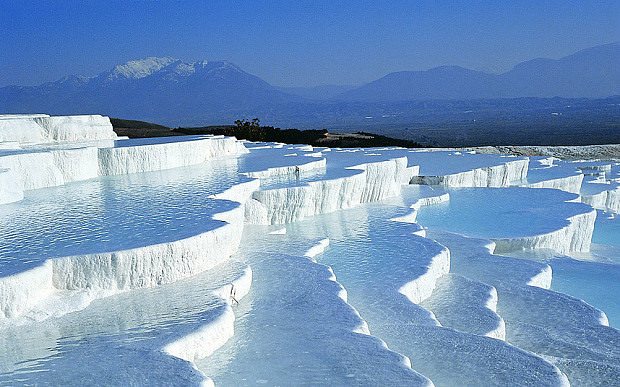 The fertile lands of Anatolia are home to many world heritage sites, including an ancient theater, natural wonders and thermal springs

Hosting scores of civilizations throughout history, Turkey is a precious gem nestled between Asia and Europe. Anatolia, with its natural wonders and historic lands, carries the footprints of ancient civilizations spanning thousands of years.

The UNESCO World Heritage List features 13 sites located in Turkey, as well as 54 nominated sites on the UNESCO Tentative List and 11 elements featured on the list of UNESCO's Intangible Cultural Heritage of Humanity, including Turkish coffee and the arts of the meddah - public storytellers.

If you are planning to vacation in Turkey this year, take a look at these world heritage sites where you can enjoy mountain climbing, visit the earliest settlements of the Neolithic Age, bathe in therapeutic thermal springs and swim in the waters in this historic town. 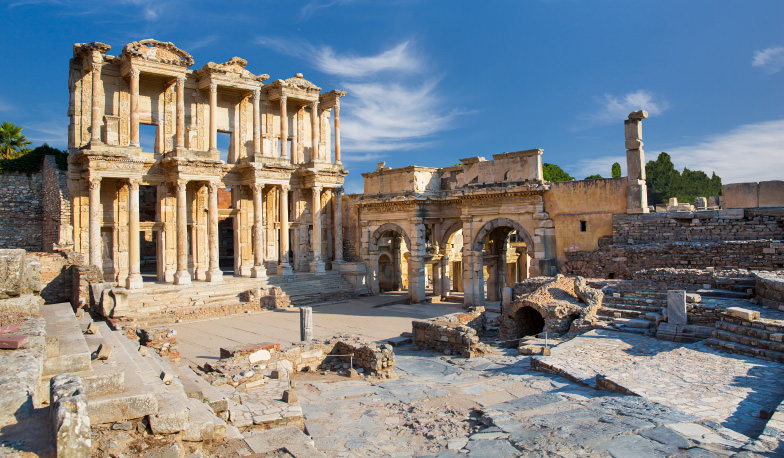 Ephesus is one of the most well-known sites of the Roman Empire. The remnants of the birthplace of this ancient civilization are located in the western Turkish province of İzmir in the district of Ephesus - "Efes" in Turkish - and is regarded as one of the most remarkable Roman sites in the world. Built in the 10th century B.C., the city was founded by Attic and Ionian colonists. The Temple of Artemis is the most famous ancient artifact located in Ephesus and is one of the seven ancient wonders of the world. This ancient city is also home to one of the seven churches of Asia, cited in the Book of Revelations. Along with the Temple of Artemis, the House of the Virgin Mary is located here and, according to ancient legend, the Virgin Mary spent her last days at this house in Ephesus. Since the 19th century, the House of Virgin Mary has been revered by Catholics, who visit the House of Virgin Mary as a sort of pilgrimage and testament of their faith. The ancient city of Ephesus is also believed to be the location where the story of the Seven Sleepers took place. According to Muslims, Catholics and Orthodox Christians, the seven sleepers slept in a cave in Ephesus for centuries because they were persecuted for their belief in Jesus Christ. Ephesus takes visitors on a mesmerizing journey to the past and, just a short flight from Istanbul, is easily accessible to visitors. After flying from Istanbul to İzmir's Adnan Menderes Airport, visitors can rent a car and travel to the district of Selçuk where Ephesus awaits. In addition to the historic remnants in the ancient city, the famous Library of Celsus is found there, along with an ancient theatre and Roman baths. The ancient theater, which was capable of holding 25,000 spectators, was initially used by the Romans for drama performances, and later used for gladiatorial combat. 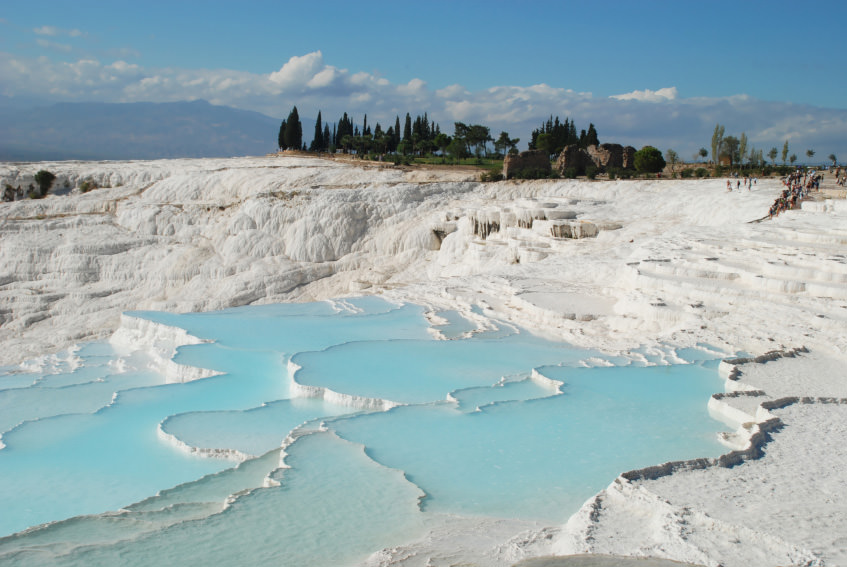 Hierapolis, also known as Pamukkale - cotton castle in Turkish - is located in western Turkey. The hot springs in Hierapolis have served as a thermal spa since the second century B.C., known for its healing effects. The city was first founded as a thermal spa by the Seleucid Empire during ancient times and later became a part of the Roman province of Asia around 133 B.C. In 17 A.D. the city was destroyed during a huge earthquake but, during the Roman Empire times, Hierapolis became a famous destination for thousands, who flocked to the springs to benefit from its medicinal properties. Hierapolis was featured on UNESCO's World Heritage List in 1988 based on natural and cultural criteria. Famous for its hot springs and travertines (terraces of carbonate minerals left by flowing waters), Hierapolis is highly recommended for those looking for a relaxing experience. Among the dozens of historical sites to visit, there is the Temple of Apollo, noteworthy gates, a nymphaeum, a martyrium, many baths, pools and theaters located here. Holding the ruins of many different civilizations, natural wonders and pure white travertines formed from hot calcium-filled mineral water, Pamukkale is distinct for its three different thermal regions - Sarayköy, Karahayıt and Gölemezli - offering health benefits with springs and mud baths. In Pamukkale, you can spend a day or just a few hours being cured of dermatological ailments with pure, organic skin treatments. You should also find an opportunity to visit the amazing travertines that enable you to see the kind of beauty that is only found in nature.

Described as an outstanding natural treasure, Mount Nemrut, with the tumulus containing the tomb of King Antiochus of the Commagene Kingdom, and several giant statues, is a UNESCO World Heritage Site. There are numerous large statues assumed to be royal tombs dating back to the first century B.C. Accepted as the highest open-air museum in the world, Mount Nemrut is located in the Adıyaman provincial town of Kahta, and the beauties of the enchanting 10-meter statues and ancient Commagene sanctuary are mesmerizing. The mountain is believed to have been a place for worship in ancient Anatolia, and when you visit, you will understand why ancient people chose it as a sacred place. It has been said that Antiochus built a monumental tomb, a tumulus of cut stones built over the tomb and terraces, known as the East, West and North, on the three edges of the tumulus. On the East and West, there are giant statues, inscriptions and reliefs. Five statues portray the gods and Antiochus. Every year, thousands of tourists come to the mountain to witness its magnificent history in person, including the artistic achievements of the Hellenistic period and the fascinating beauty of its monumental sculptures. While the statues are magnificent at any time of day, the mountain offers its best view at sunset. When you see the sun setting on the mountain, you will experience a breathtaking landscape, so do not forget to take your best camera along. 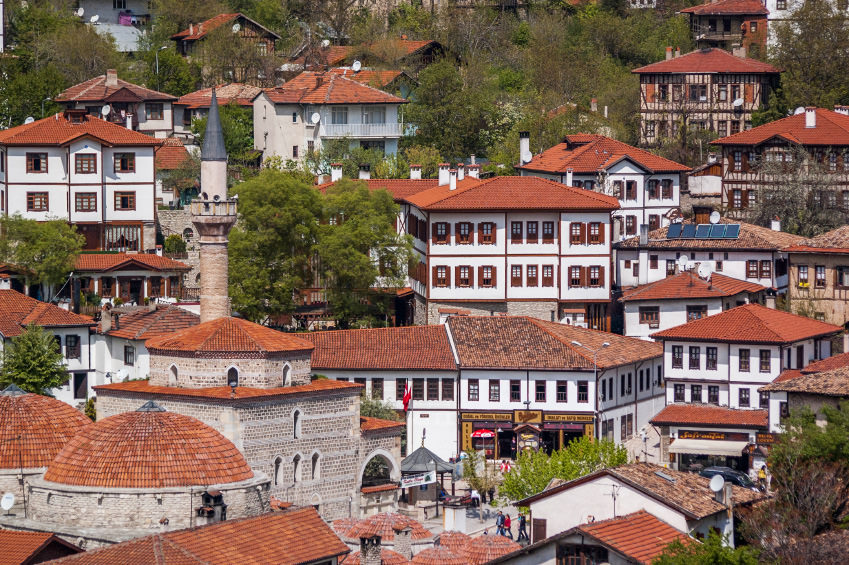 The 3,000-year-old city of Safranbolu is a popular destination for those interested in seeing the unique beauty of the region's bridges and homes, as well as Ottoman-era architecture including the han, mosque, bath and madrasa, drawing in approximately 600,000 domestic and foreign tourists alike. The region's traditional buildings, established between the 18th and 20th centuries, were generally designed with six to eight rooms in a triple-story structure. Visitors especially travel to the region during religious or official holidays. This typical Ottoman town, designated as a UNESCO World Heritage Site in 1994, was an important caravan station on the east and west trade route from the 13th century to the early 20th century. Safranbolu reflects not only Ottoman architecture but also evidence that humans settled here as far back as the Prehistoric Age, according to archaeological studies. This ancient city also features tombs carved out of rock and a Roman temple. 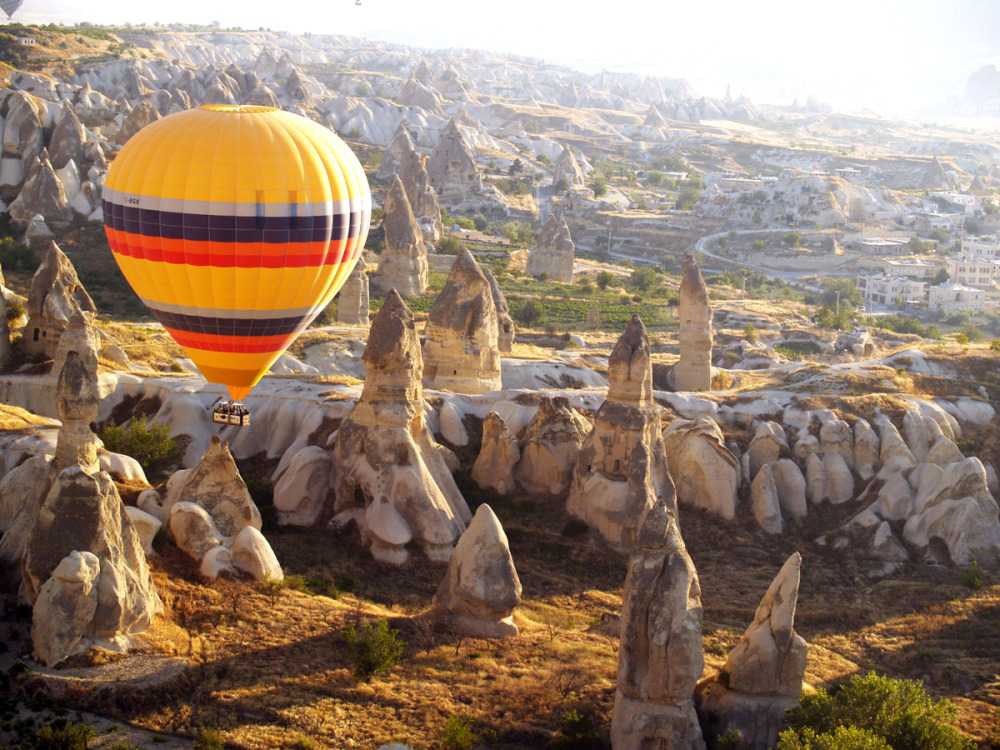 Located in the middle of the country, Cappadocia represents the finest work of Mother Nature and is a great way to witness the region's history. A place of natural beauty, Cappadocia has such a charming atmosphere that a day trip will not suffice to enjoy all of its attractions. With its volcanic landscape offering gorgeous scenery and slick rocks with lush, green trails and caves, tunnels and canyons waiting to be explored, Cappadocia is a paradise. The region has been carved out of volcanic rock over centuries, withstanding winds and melting snow which attributed to its unique colors and shapes; notably, its fairy chimneys. This magical region invites you to explore the heart of Anatolia with its historic remains, standing as some of the most renowned ancient natural wonders. Cappadocia is one of the most highly visited destinations in Turkey, and is packed with locals and foreign tourists year-round. The only way to understand its popularity is to take a trip to this magical land. It is also one of the best places for a honeymoon, with foreign tourists coming here specifically to have their wedding photos taken. All the leaves and natural beauty seem to keep pace with the colors of the area in every season, and Cappadocia is especially enchanting in the winter. Cappadocia Cave Suites, located in the city of Göreme, is a perfect destination to immerse yourself in your own fairytale with natural beauties and cozy cave suites. A Turkish bath, sauna and rooftops from which you can watch the Cappadocia landscape will make you feel like you are living in a dream.
Last Update: Apr 16, 2016 10:46 am
RELATED TOPICS