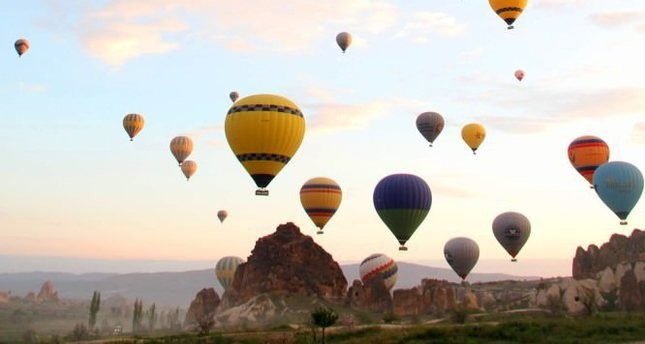 by Daily Sabah with AA Oct 05, 2016 12:00 am
In Turkey, Cappadocia, with its spectacular rock formations, is known as one of the best places to fly in a hot air balloon. A new project "Balonla Keşf-i Alem" (Discover in a Hot Air Balloon) initiated in the central Ankara province invites tourists to explore archeological and historically significant sites in hot air balloons.

The tours fly over the Gordion archeological site situated in the modern Yassıhöyük village in the district of Polatlı. The ancient city of Gordion was the capital of the Phrygian Empire, ruling seat of King Midas. The city was built on the ruins of a Hittite city, where the ancient Persian Royal Road, major trade routes across Anatolia between Lydia and Assyria-Babylonia, crossed the Sangarius (the present-day Sakarya) river.

Polatlı Mayor Mürsel Kızılkaya said, "The Gordion archeological site houses a number of ancient tumuli with other archeological findings. Anyone interested can join our tours and explore the area by air. I believe the project will develop tourism in Central Anatolia."

The next route is the war zone of the Battle of Sakarya, also known as the Battle of Sangarios. An important part of the Greco-Turkish War (1919-1922), the battle took place in 1921, close to the banks of River Sakarya.

Having started on Oct. 3, the tours will be free for the first eight months. Couples who are interested in marrying in a hot air balloon can also reserve a place.

The project was initiated by the Polatlı Municipality, the Ankara Development Agency (AnkaraKA) and the Turkish Aviation Association (THK). The AnkaraKa has financed 900 projects so far with more than TL 140 million ($46 million) in funds.
Last Update: Oct 05, 2016 1:27 am
RELATED TOPICS