The last 'Yemeni' maker of Safranbolu 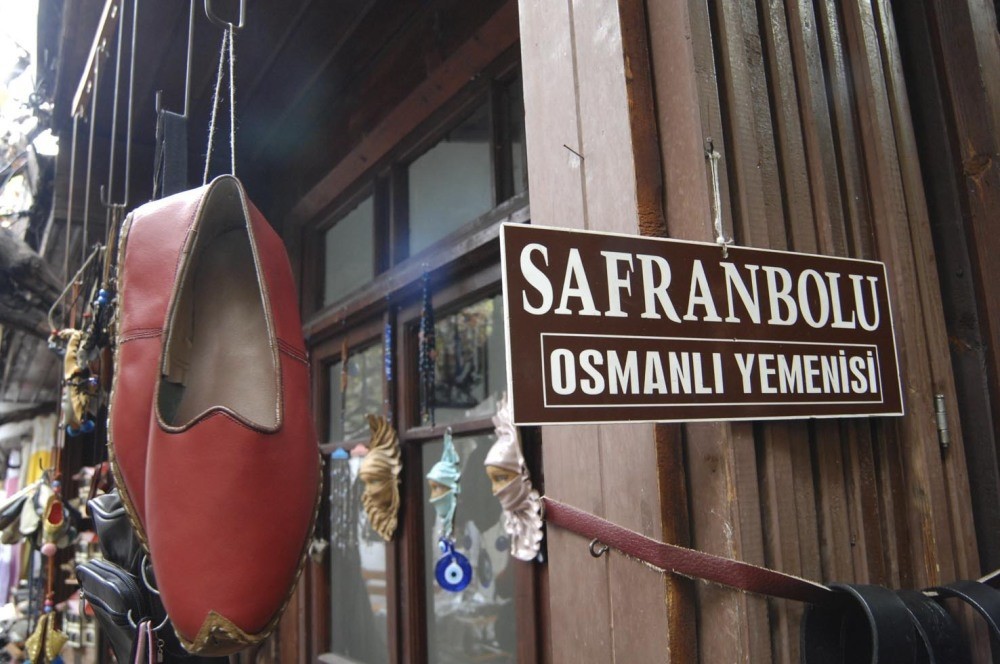 by Anadolu Agency Dec 03, 2016 12:00 am
Karabük's Safranbolu district, which is a UNESCO World Heritage Site, feels like an open air museum with its unique houses, mosques, fountains and bridges. In the Ottoman era, it was a lively place thanks mostly to its bazaars, created under the Ottoman guild (esnaf) system.

With its heyday long behind it, the Yemeniciler Ottoman Bazaar in the district, which once featured 48 shops that made "Yemeni" (Ottoman style shoes) for the Ottoman army, seems like a distant memory, since all the craftsmen have closed their shops, except one.

Now, Erhan Başkaya is the only craftsman in the bazaar who is still producing "Yemeni" and since there is no other craftsman left in the bazaar, he teaches his craft to his son Taha.

According to researcher and writer Aytekin Kuş, the Yemeniciler Ottoman Bazaar used to have a total of 48 operating shops that produced shoes with locally produced leather from tanneries in Safranbolu.

Kuş said the craftsmen used to work according to the Ottoman guild system and the historic bazaar is in the shape of equilateral triangle.

"In its heyday, all 48 shops were buzzing with craftsmen, working like bees, producing shoes. But, once the Karabük Iron and Steel Plant was established in 1937, the interest in the century-old craft declined. After 1937, this place became deserted. However, on former Culture and Tourism Minister Ahmet Taner Kışlalı's orders, the bazaar was restored and turned into a market place where traditional arts were again practiced. A museum was also established within the bazaar building, it was shut down later on. Currently, the historic building is the center of attraction in Safranbolu," she said.

To keep the spirit of the bazaar alive, Safranbolu District Governorate convinced Erhan Başkaya, the old "Yemeni" producer, to open a shop in the Yemeniciler Ottoman Bazaar. Now, Başkaya is one of the more popular figures in Safranbolu, loved and appreciated by the locals. Despite some physical illnesses, he is managing his shop and teaching his son the tricks of the trade as he was not able to find an apprentice.

"The father and the son have devoted themselves to passing the spirit of Safranbolu to future generations," Kuş added.

Kuş claims the "Yemeni" is a very healthy shoe. "It is covered with goat skin and all the stitches are done by hand. 'Yemeni' itself is a witness of history, and the Yemeniciler Bazaar has an important place in the culture of Safranbolu."

Located right in the middle of the bazaar, "Lonca Kahvesi" (Guild's Coffee Shops) was a place where guild meetings used to take place, people discussed the market economy, the family of the groom asked the hand of the bride and people sent gifts to one another.

"There is an empty space in front of the coffee shop. The most senior shopkeeper, who was called 'yiğitbaşı,' would give advice to other shop owners there. People learned how to behave and do business from their master artisans," added Kuş.

He said the bazaar is now one of the liveliest places for social life in Safranbolu. He claimed that today, more and more people are visiting Safranbolu to see how "Yemeni" is made, drink a cup of coffee and see the traces of the old way of life.

Yemeni master artisan Erhan Başkaya said the Yemeniciler Ottoman Bazaar was established way back in in 1661 and he is the last representative of the craft.

He said, along with his son, the two will do everything in their power to keep the craft alive, "Yemeni is a type of shoe that is entirely made by hand. It is made of real leather. Goat skin is used inside the shoe while water buffalo skin is used underneath the shoe. All the stiches the done are by hand. We will continue to practice this craft. I am the only 'Yemeni master' left but my son will keep my legacy alive and others after him."
RELATED TOPICS