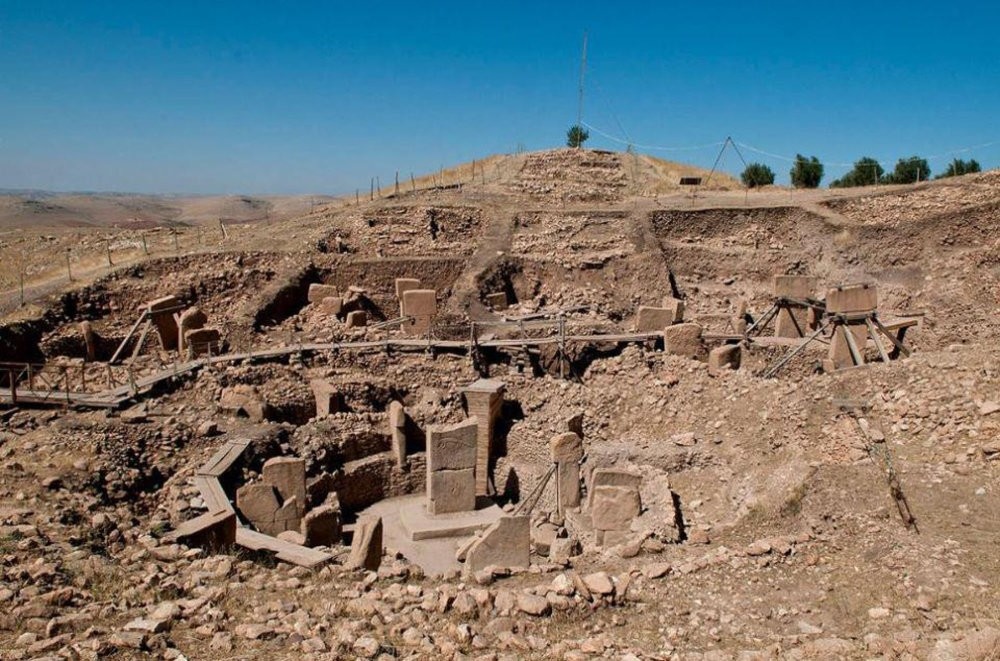 The magical atmosphere and surroundings that resemble fairy tales, combined with local hospitality of the locals, a trip to the southeastern part of Turkey was more than my friends and I were expecting

Southeastern Turkey feels like an entirely different country than the cosmopolitan drags of Istanbul or the sunny old town and open cafes of Antalya. Southeastern Turkey is ancient: It quite literally contains some of the oldest cities in the entire world. Both the Tigris and Euphrates rivers flow through southeastern Turkey, marking out the fertile crescent, Mesopotamia, the honest-to-god cradle of Western civilization. This region is replete in the bones of civilizations, both ancient, medieval and modern and contains the sculpted remnants of forgotten cultures, un-locatable in any other part of the world.

And best of all, the people fall over themselves to be hospitable to travelers. I think during our entire two-week trip to southeastern Turkey, we paid for accommodation four nights in total. We would struggle with our hosts to pick up a bill here and there and they literally would not let us. It is part of Islam and Turkish custom that travelers are treated with the highest respect. And in all my travels, I have never been so warmly accepted as I have in southeastern Turkey. The locals follow their law of hospitality to the letter and with a whole lot of spirit. In honor of Ramadan, we are taking you east, to the land the prophets were born, and where everyone is just the nicest. Let's take a look. 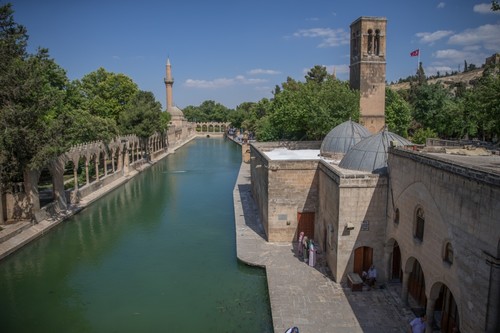 The Balıklıgöl Mosque complex and pool is perhaps the main reason travelers come to Şanlıurfa, or just Urfa to most. Perhaps five stone mosques of various size and function surround a park, cut with stone canals, which all eventually funnel underneath some arches into a rectangular pool in the center of an open-air palace. The carp live in the pool. They are sacred. On all sides, we were surrounded by the masterworks of Islamic architects. We bought carp snacks for a lira and sprinkled them into the pool to watch the carp struggle over each other to snack out. The fish struggled and flopped over each other in the pool.

We followed some signs into a cave, built into the mosque, where apparently Abraham was born. A lot of people were praying there (in the men's half of the cave, anyways - I assume a lot of women were praying in their half, too).

At night we came back and it was lit up, electric spotlights playing on the water's surface like the Xanadu pleasure garden of my dreams.

In Urfa, we stayed with Hassan. When he saw us, obvious foreigners, in the middle of the old town, he offered us a place to stay. Hassan was at least 70, wore a skullcap over his matted grey hair and walked with a cane. I have seen a thousand old men in Turkey who looked exactly like him. I realized he was walking toward us, and then he held out his hand to me, to shake.

He beckoned for us to follow. We entered the alleys of the old city, skinny channels of bare stone - the walls stretched 30 feet above the ground. I felt small. We came to an iron door set into the featureless rock. He pulled a plastic twist-tie poking out through a hole in the door, and the latch gave and opened. We walked into a courtyard, with a dry fountain, some mopeds to the side, and a stone staircase hooked onto a balcony which wound around the perimeter. One door led to a giant sink with some black rubber hosing, one room led to a kitchen blasted out with age and mildew.

Hassan pointed up to the door on the balcony and said, "Syrian, family! Stay there now. We, here," and he pushed upon a pointy wood door in the wall to some spare quarters. Hassan explained that in the summer, he hosts all sorts of couchsurfers and they sleep on the flat roof. In the spring and fall, he drives his motorcycles across Europe. Hassan really, REALLY liked motorcycles. Since the Syrians had the nice bedrooms upstairs, we could have his bedroom, and he would sleep on the couch in the workshop.

Hassan was poor, but was still as welcoming as he could be, and shared his ancestral home with us all the same. Some local neighbor guys came by on their own motorcycles and brought him food. I got the sense that he was kind of a neighborhood celebrity in his elder years.

This site is 13,000 years old. I read about it many years ago in National Geographic, and it described a Stonehenge-like temple unearthed somewhere in southeastern Turkey. It was unique because of its age. It predated agriculture, which meant that a nomadic, hunter-gatherer people had made it a permanent site of nature worship. The bones of thousands upon thousands of ancient animals were found buried nearby. Furthermore, there are about ten of these sites, built on top of each other - and they were all filled in by hand. What would cause ancient nomadic people to erect a Stonehenge-like site, carve animals on the pillars, bring sacrifices to priests, and then fill in the site years later? I pretty normally assumed that I would never, never ever be close to that part of the world, nor that I would have the money to afford the kind of tour which allows archaeological tourists to visit these places.

The site is unmanned and on top of a lonely hill 14 kilometers (8.7 miles) outside of Urfa. A small informational sign gave us some idea as to the people and the culture who once had inhabited the area. "Imagine this area 13,000 years ago," it read. "It would have been a paradise. Flowing rivers, plenty of fruit and nut trees, fish and game readily available." Someone had a sheet draped over a plastic card table and was selling translations of the same history book in Italian, Turkish, English and German. The wind picked up, and the little man spent some time smoothing down his sheet as it flapped around his ankles.

The dig complex lay under a cover, for weather protection, and you can look upon a fox carved upon a rock 13,000 years ago. Most of the carvings are of animals or birds or people dancing around. We followed the boardwalks through the dig, stopping where we could to view the faces of the stones. Atop the hill was a single twisted withered tree, with a thousand plastic bags tied to it. I think it was a wishing tree. I could see nothing but gentle rolling hills in every direction. I knew that whatever I wished for at this tree, at a site of ancient nature worship, would come true, and it scared me.

The cone houses of Harran

Just to the south of Urfa sits an eerie plateau, mostly empty except for a village built out of scraps of tarp, canvas, wire, and old tires, a place where goats wander freely under the stars in the enormous ruins of an ancient university. The only things remaining, beyond the thousands of rocks dotting the fields, are a tremendous arch and a pillar, the bones of a once-towering mosque. As soon as I stepped off the minibus from Urfa, I felt a powerful urge to abandon my whole life, just start hitchhiking across the desert and be seduced by the road. This was the furthest I had ever been away from home. We were 5 kilometers from the Syrian border, and I was very conscious of this. It made me quiet and careful, but more so convinced that at any second we would get either kidnapped or bombed. A man on a motorcycle drove through the stony plains, and I wondered what kind of city had stood on this ground before collapsing into nothing.

We played in the university ruins - though there is a fence encircling them, there is nobody there to stop you. We followed some Russians around the back of the fence to a hole. We walked in near the base of the six-story pillar, the stones of its square base almost red. We stood under the arch and took pictures of ourselves being silly. We walked in between chunks of decorated stones, carved and then broken off, either by earthquakes or marauders or normal decay. Anna and Alex took pictures of the goats, and then pictures of each other chasing the goats.

We crossed over a hill, and saw the cone houses - they look like a family of blunt beehives thrust out of the ground, daubed over with mud and clay. The stone houses are cool in the summer and warm in winter. I know this because it said so on an informative sign. An Arab family had opened their cone house courtyard to the few tourists that came through. Beyond the few families we had seen here, it was almost uninhabited. We could have had tea in the cone houses, but we declined because nearby the cone houses were some unattended camels, and that held our interest far more than a few damp tea leaves.

Instead, we found our way back to the six small buildings which make up the town's restaurant, tourism office, and bus station, and caught the next bus back to Urfa. 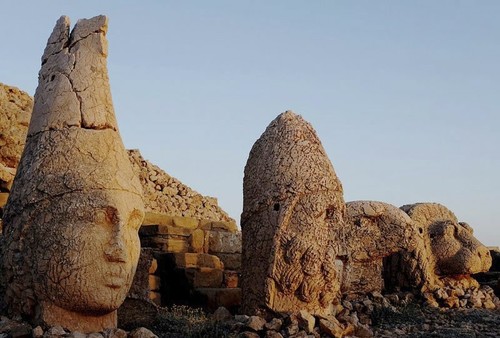 We had not waited five minutes when a Kurdish man picked us up and said it was impossible to get up to the mountain because it was winter, but he would give it a shot. We dropped off his friend in a mountain village and we had tea. I tried to give him gas money and he declined.

We then made our way up the mountainside, listening to screechy Kurdish flute music set to a drum machine. Along the way he pointed at all the pensions and hotels and said, laughing, "Kapalı! Her şey kapalı!" Everything's closed! It was, no joke, the dead of winter. (We took this trip in January). The snow got higher and higher up the wheel. When I saw another car stuck on the shoulderless single-lane mountain road I decided it was probably unsafe and said we should turn around, and our man agreed. We did like a seven-point turn and my friend Anna was flipping out in the backseat, and the guy was laughing, saying, "Korkmaz! Korkmaz! Don't be afraid!"

He stopped for a moment so we could see both the snow-covered tip of Mount Nemrut, just out of reach, and the view of the valley below. He called us crazy tourists, and Anna said, "No, we are strong tourists," and he laughed.

He invited us to his house in Kahta for dinner and to stay the night. We enthusiastically agreed. He drove us down the mountain to his house, introduced his large family, and ate a traditional meal on the floor. It was perhaps the best "çig köfte" I've ever eaten, and the best cucumber tomato salad too.

I guess this means that I have not in fact actually been to Mount Nemrut, but I'm not bothered by it. All along the way we were laughing, convinced that such a ridiculous plan would not work. Hitchhike to the top of a mountain? It's insane. We had a great time and met some supremely kind locals and I think had a richer experience than someone who would have just paid cash money for a hotel and a hike. I've seen a picture of the place. That was good enough for me.